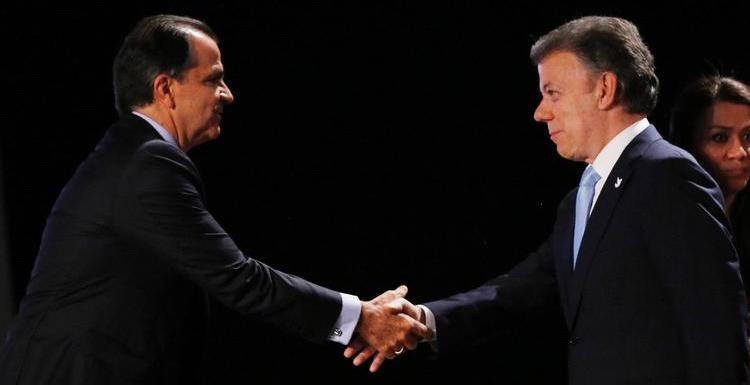 Espionage, alleged drug money bribes, and secret videos have come together to create a dramatic final act for Colombia’s 2014 presidential race, which will register its first round of voting on Sunday, May 25. This brutal, no-holds-barred presidential marathon is full of controversy, and although Colombia today faces challenges in areas ranging from unemployment to fragmented health care, security policy has taken center stage in the run-up to the election. Foul politics between the two leading candidates, incumbent President Juan Manuel Santos of the center-right Social Party of National Unity (Partido Social de la Unidad Nacional) and Óscar Iván Zuluaga of the far-right Democratic Center Party (Centro Democrático), have transformed the election into a referendum on Santos’s peace talks with the Fuerzas Armadas Revolucionarias de Colombia (FARC), the country’s most formidable guerrilla group that has been battling government forces for five decades. While polls cannot legally be conducted in the week before the election, polls dating back to May 15 grant a slight lead to Zuluaga, just ahead of Santos. The tight race indicates that it is likely Zuluaga and Santos will be forced into a second round of voting. [1]

The threat Zuluaga’s candidacy poses to Santos’ peace talks represents a broader threat to the establishment of a lasting peace in the South American nation. If Santos is reelected, the path to a peace treaty will be kept open and the FARC will likely be integrated into Colombian politics.  If the ongoing peace talks stop, the group will not be easily defeated by state forces. Many fear that a bloody guerrilla war could once again resume, marking a continuation of Colombia’s violence.

Unfortunately, Santos faces a formidable opponent in the form of ex-President Álvaro Uribe, founder of the Democratic Center Party and chief supporter (and puppetmaster) of Zuluaga,  who he uses as a proxy candidate of the extreme right. Uribe served as Colombia’s president from 2002 to 2010. In his tenure, the country saw an intensification of Plan Colombia, the counterinsurgency and counter-narcotics security operation coordinated with U.S. support. Reviews on the Plan vary by perspective. For some Colombians, Plan Colombia was successful in restoring order to the country after years of chaos. However, such approval of the Plan belies the experiences of those living in rural war zones, where Plan Colombia entailed an enormous spike in violence and massive human rights violations. [2]

Uribe and Santos have a lengthy, embittered history in Colombian politics. Santos served as President Uribe’s defense minister before ascending to the presidency in 2010. As president, however, Santos has sought to rectify abuses of justice during the Plan Colombia years, even when this has entailed jailing many of Uribe’s closest allies. Santos’ fight against corruption and espionage entangled the likes of Jorge Noguera, a campaigner for Uribe who was involved with paramilitaries and allowed them to spy on union leaders and activists who were later assassinated, and former agricultural minister Andrés Felipe Arias, who was probed for corrupt irrigation subsidies. Numerous other investigations into paramilitary involvement among friends of Uribe further added to his fury. Santos’ attempts to improve relations with Venezuela were also met with consternation from Uribe. [3] Though Uribe decried Santos as a traitor, Santos has since stated that he only betrayed “corruption, cronyism, paramilitarism, and wiretapping.” [4]

Now, President Santos is faced with a neck-and-neck election against Zuluaga and his full backing from Uribe’s powerful political arsenal in the Democratic Center Party. Zuluaga’s major campaign point is a re-escalation of security operations. [5] His campaign has focused on increasing the country’s police presence and police salaries.  He has also criticized the peace talks with the FARC that have taken place in Havana since 2012, expressing his belief that the FARC is strictly a narco-terrorist organization and that its eradication is a necessary condition for state security. [6]

As a result, Zuluaga plans to renegotiate the terms of the peace talks with the FARC. For instance, he has promised that he will only continue the negotiations if the FARC completely disarms and agrees to face the threat of criminal trials. Clearly, these terms do not sit well with the rebels. On the campaign trail, Zuluaga and Uribe also reminded voters that “previous peace efforts strengthened the FARC and that it was Uribe’s uncompromising policies in 2002-2010, when Santos was his defense minister, that saw the biggest military gains against the rebels.” [7] This statement is only half true, given that these military gains came with a heavy price:

“4.9 million Colombians have been forcibly displaced by violence in the past twenty-five years. However, 2.4 million of them were displaced during President Uribe’s eight years in office (2002–10). The Colombian military’s aggressive counterinsurgency operations under Uribe’s ‘democratic security’ strategy are a major cause of the country’s escalating refugee crisis as soldiers forcibly displace communities in guerrilla-controlled zones. According to the Norwegian Refugee Council, ‘The government’s military strategy, which was intended to be preventive, is instead resulting in an increased displacement of people.” [8]

Ultimately, personal animosity between Santos and Uribe and differences in strategy regarding the FARC have defined this year’s campaign for the presidency. Though Santos led the polls for the majority of the race, his support fell in the latest polls. Dubious claims from the Zuluaga-Uribe camp alleging financial connections between Santos’ campaign manager and drug traffickers have not been supported by evidence, but have nonetheless damaged Santos’ campaign. The slow progress of FARC negotiations, in spite of the FARC’s “vow to sever their ties with the drugs trade, clear landmines, and work with the government to help farmers substitute their plantations of coca, the raw material used in making cocaine,” has also hurt Santos’ cause. [9]

Yet, some relief from the siege on Santos’ policy of negotiation has come from the fact that dirty politics have ensnarled the Zuluaga campaign. A recently leaked video showed Zuluaga discussing stolen emails and information about the ongoing peace talks in Havana with Andrés Sepúlveda, who has been arrested for attempting to sabotage government talks with FARC. The spying scandal highlights the fact the Zuluaga campaign has little interest in continuing constructive talks with the FARC leaders in Cuba, instead using them as a potential lever to unseat President Santos. [10]

Though Zuluaga’s campaign has promised security for Colombia, progress with the FARC would be lost if he wins the presidency. Zuluaga will only bring more violence to Colombia by changing the terms that brought the FARC to the negotiating table in Havana. Uribe and his allies seek, at the expense of a resolution of Colombia’s internal strife, to consolidate political power for the continued success of the Democratic Center party. In response, Santos needs to mobilize as much support as possible in the last days of the campaign in order to build momentum and win the election. With the end of this brutal election in sight, one can only hope that the Colombian people will vote for peace.