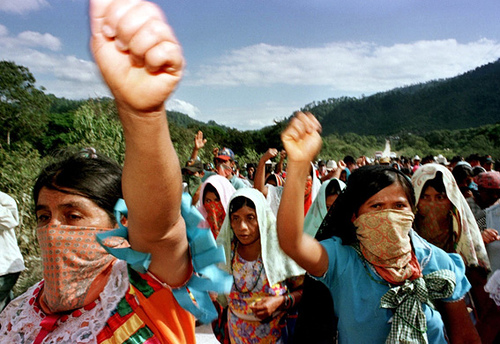 The Zapatistas have a motto: “everything for everyone, nothing for ourselves,” which seems to have been twisted by Mexican officials, as the government almost gleefully denies the indigenous group its autonomy. This includes being repeatedly denied the ability to assemble peacefully and work their own land freely. Their homes have been seized in the name of private investments, they are being forced to sell themselves as cheap labor to the corporate machine, and the land’s natural resources, which had remained unspoiled and shared by all, are now being exploited for profit. The “death blow” delivered by NAFTA to the indigenous people of Mexico, particularly those in the southeastern state of Chiapas, has archly manifested with the coming of the PPP (the Plan Puebla-Panama). This policy is determined to yoke the inhabitants of the region under the auspices of neoliberalism; a method utilized to defeat the autonomous communes, one that can easily be mistaken as an economic and employment package.

NAFTA, ratified in 1994, directly opposed, and in effect overturned, Article 27 of the Mexican Constitution, which had guaranteed collective property rights to those who worked the communal land. This mandate, in fact, was explicitly acknowledged by the U.S. government as a necessity prior to the signing of the NAFTA pact. Essentially, the Maya and other indigenous groups were forbidden to participate in a legal statute that enabled their cultural practices. Eventually in 1996, the Zapatistas forced President Ernesto Zedillo to the bargaining table, where they signed the San Andrés Accords. The Accords were created to further guarantee the protection of indigenous rights as well as credentialing them autonomy, among other national social criteria (Accords Article I).[1] The treaty, which was never implemented, was not only meant to address the critical issues facing the state of Chiapas, but also was aimed at all countrywide indigenous concerns. It was the negligence of these legal affairs that had incited the rebellion in the first place. In response to the government’s blatant disregard for the Accords, which was the second legally based document protecting their rights, the Zapatista’s formed the Juntas de Buen Gobierno, (Councils of Good Government) in 2003.

Under the leadership and guidance of these councils, health care was made available to “63% of all expectant mothers, double the average for non-Zapatista communities in the area.” Furthermore, “74% of Zapatista homes have access to toilets, as opposed to 54% in non-Zapatista homes” (Pablo Gonzalez Casanova, former rector of Mexico’s National Autonomous University).[2] Though the Mexican government repeatedly failed to recognize the needs of its struggling indigenous population, Zapatismo emphatically flourished. Although accessible health care was a major concern, and great strides were made in education, as well as women’s and indigenous people’s rights, these “guerrillas” were merely addressing, and rectifying what by all standards was a humanitarian crisis.

The systematic degradation of indigenous communities has culminated in the PPP effectively establishing a Free Trade Zone in the southeastern sector; a zone that is essentially outside Mexican jurisdiction. These zones allow for the exploitation of people by foreign corporations (the only existing neoliberal institution more obstructive than suffocating austerity measures). Mexico’s long sought after Plan Puebla-Panama exempts all participating companies from taxes and releases them from their social obligations to abide by existing regulations and standards of conduct (Puerto Chiapas).[3] Communities that were previously self-sustaining collectives are now providing labor for the maquilas. The self-created social infrastructure of the Zapatistas has literally been slashed and burned, replaced by working conditions crudely patched together with negligence, an hourly wage that might suffice for a six-year-old’s weekly allowance, and the provision of roads for the transportation of commodities.

The welfare of the people of Chiapas was clearly of scant concern to the Mexican government (ergo, the rebellion), but the sanctity of the Lacandon Jungle, which many Zapatistas had inhabited for two or more centuries, is quite a different story. Significant oil reserves are located within their communities, as well as being the source of nearly half of Mexico’s water supply. An enormous profit could be turned from privatizing the oil fields and water supplies, not to mention the possible construction of hydroelectric dams in the region. This woeful tale may sound strangely akin to America’s own history with its indigenous population. Fortunately, U.S. foreign and Indian policy put an end to such harsh treatment of native communities located on U.S. soil. Ironically, however, the PPP, along with its big brother, NAFTA, were both largely America’s brainchildren. Unsurprisingly, the champions of decency and democracy became responsible for the displacement and debasement of an entire Mexican state, spurning them of its own natural splendor and resources.

In conjunction with such incriminating circumstances, the forced expulsion of indigenous groups and the atrocious working conditions that they are coerced in to, some view such occurrences as acts of genocide under international law. Such a term should not be thrown about lightly. However it raises some very real concerns regarding the fate of the Maya and other native peoples in Mexico. It is irrefutable, though, that NAFTA’s machinations, the PPP, and the Mexican and other signatory affiliates are guilty of violating the International Labor Organization’s Convention 169, in regards to indigenous and tribal peoples. The article states: Governments shall have the responsibility for developing, with the participation of the peoples concerned, co-coordinated and systematic action to protect the rights of these peoples and to guarantee respect for their integrity” (ILO #169)[4].

Despite the glaringly obvious legal violations, human rights derelictions, and acts of environmental destruction on the part of Mexican authorities, the Zapatistas are still fighting a losing battle. Seventeen years of determination and strife, and eight years of self-autonomy are all being swept away by the combined regional might of the Mexican and American governments combined with corporate interests. This article does not aim to argue from a moral or ethical standpoint, but rather to simply point out that what the United States and Mexico are doing is illegal, as per national and international law. It is only in defense of global capitalism that such atrocities remain protected.