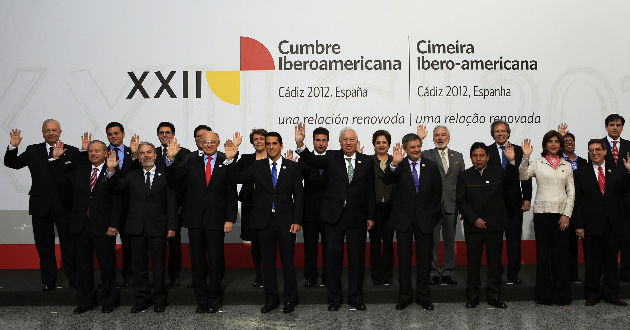 November 17 was the last official day of the annual Ibero-American Summit that took place in the historic port city of Cádiz, in southwestern Spain. The timing was symbolic, as this year is the bicentennial anniversary of Spain’s inaugural constitution. First and foremost, the current European debt crisis made up a large part of the discussions. In addition, Madrid was happy to use the forum as an opportunity to promote local companies to the extensive Latin American market.

The present activities of the Spanish Kingdom represent a curious shift in the traditional relations between Spain and Latin America. In the past, it was Latin America that strived for recognition from Europe, as its labor force migrated across the ocean. However, Spain now turns to Latin America as a solution to its crisis. In fact, 60 percent of Spanish immigrants between 2010 and 2011 have settled in Latin America. [1]

Nevertheless, the nonattendance of prominent leaders from a number of Latin American countries such as Venezuela, Argentina, Cuba, Paraguay, Uruguay and Guatemala devalued the importance of the Summit. The absence of some leaders has allowed the discussions to remain civil, as it is difficult to forget the heated exchange that took place between Hugo Chávez and King Juan Carlos during the XXVI Ibero-American Summit, which resulted in the King of Spain telling the President of Venezuela to “shut up.”

Argentine President Cristina Fernández de Kirchner delighted the audience during her recent press conference in Buenos Aires, when she announced that she would not be attending the Summit in Cádiz and provided details of her conversation with the King of Spain. In her distinctive manner, Mrs. Kirchner informed the public of Juan Carlos’s assurance that she would be missed during the Summit. Moreover, the Argentine leader was not only absent in Cádiz, but will also be missing from the Mercosur and Unasur meetings that take place in November and December. Nevertheless, this did not stop the controversial Argentine President from appearing before the public in her own country. [2]

The final list of attendees, at the Ibero-American summit, included eighteen Latin American chiefs of State, along with guests, such as the President of Haiti, Michel Martelly, and the Prime Minister of Morocco, Abdelila Benikran. [3] This combination of various Latin American leaders made for an interesting dynamic, as every leader had a domestic and international agenda that he or she attempted to both defend and promote during the Summit.

For the Spanish government, the goal of the two-day meeting was clear: convince the attending countries to support the Anglo-Saxon solution to the debt crisis in Europe, instead of the one advanced by Germany. With the German pressure mounted over Spain to accept a total bailout of its economy, this was a crucial time to resist the Berlin’s firm tactics.

This conference was the last Summit to be held under an annual format, as it has now been changed to a biannual event. For this reason, Spain will not be hosting the Ibero-American summit every decade, as it has been unofficially practiced. [4] As its economic and political influence weakens, Spain appears desperate to manifest a different approach towards Latin American countries.