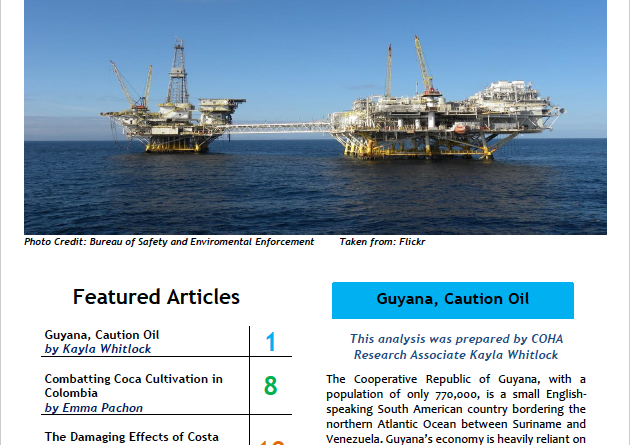 Oil Giant ExxonMobil estimates that Guyana’s offshore reserves of oil are between 1.4 and 2 billion barrels. The small South American nation is one of the regions most impoverished and Research Associate Kayla Whitlock looks at the possible impacts of this discovery on the nation’s economy. Guyana has little regulation for oil extraction and must be cautious when dealing with the power of large oil companies. The article examines the risks of corruption, and the border dispute with Venezuela, as well as the potentially huge benefits of the discovery.

The Central American nation of Costa Rica has the highest proportion of immigrants compared to population in Latin America. It is also a country with a history of solid democracy and stable economic growth. However, according to many newspapers and politicians Costa Rica is facing a spike in crime and violence. Research Associate Alexander Rawley dispels this notion, arguing that crime increases pale in comparison to their place in public discourse. Moreover he analyses the links between this narrative and xenophobia, with immigrants often blamed for this so called ‘spike in crime’.  Rawley looks at the effects of this, specifically on immigrants from Nicaragua.

For three days, starting on May 15, Jamaica was wracked by devastating rain and flooding. Research Associate Sharri K Hall looks at the effects. Hall examines the effects on infrastructure, disease, and the reaction of the government. So far the government’s response has been inadequate in both its immediate reaction and its preventative plans. The article proposes measures for the future to prevent similar devastation from occurring again.