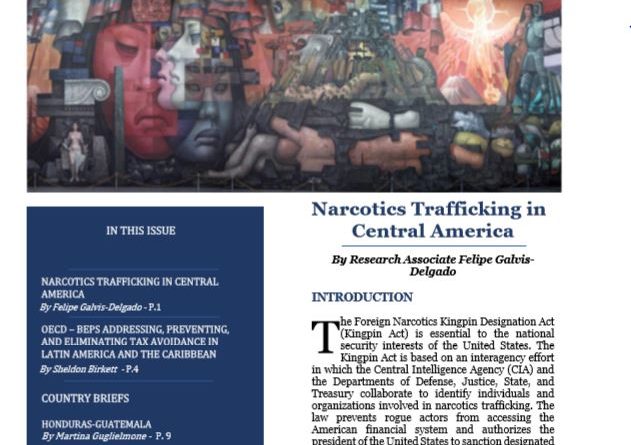 Research Associate Felipe Galvis-Delgado investigates Belizean drug-trafficking. In 2012, the Office of Foreign Assets Control in the United States Department of the Treasury designated and sanctioned a network of Belizean narcotics traffickers. OFAC’s actions were important to the national security interests of the United States as the network operates throughout Central and South America and smuggles narcotics through the American southern border.

Tax evasion throughout Latin America and the Caribbean continues to persist underdevelopment in the region. In OECD-BEPS Addressing, Preventing, and Eliminating Tax Avoidance in Latin America and the Caribbean Research Associate Sheldon Birkett examines the nature of tax evasion and tax avoidance, criticizing the shortcomings of the Organization for Economic Cooperation and Development (OECD) Base Erosion Profit Shifting (BEPS) program, as well as provide proactive policy solutions – such as Tax Inspectors Without Borders (TIWB) industry-specific auditing – as a start to tackling structural tax evasion and avoidance in the region.

Research Associate Martina Guglielmone examines the history of customs unions in Central America. Recently Honduras and Guatemala have decided to implement agreement between the two nations to reduce immigration and boost economic development. Guglielmone looks at the potential impacts of this agreement.

On July 26, 2017, the multi-billion-dollar Brazilian multinational conglomerate Odebrecht signed an “efficient collaboration agreement” with the government of Panama. This country brief by Research Associate Sheldon Birkett examines some of the challenges and hypocrisy of eliminating political corruption in Panama, considering Panama’s lax tax regime and President Varela’s dubious political affiliations with Mossack & Fonseca.

Research Associate Jack Pannell looks at the upcoming elections on October 22 in Argentina. Specifically, he focuses on the senate race in Buenos Aires Province, the nation’s most populous province and home to 40 percent of voters. With former president, Cristina Fernández de Kirchner running for the Senate with her newly formed Citizen’s Unity Party, the race will be a litmus test for President Mauricio Macri’s economic reforms. A strong showing for his Cambiemos coalition will embolden him, and a defeat will may force him to slow his overhaul of the economy.