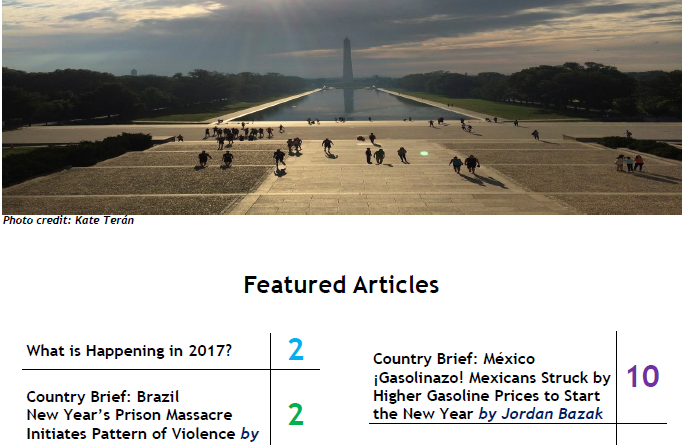 “Personalist Populist and the Anti-establishment” – By Kate Terán

Research Associate Mitch Rogers analyzes the December 31st episode of gang-related violence that broke out in the Anísio Jobim Prison Complex in Brazil. The violence, which resulted in the death of 56 inmates, is believed to be partially due to lack of adequate staffing and an overpopulated prison system.

Cuba – Castro and Obama: One Last Dance – By Kate Terán

Research Associate Kate Terán details the last changes in US foreign policy towards Cuba under the Obama administration. The President effectively ended the “wet foot, dry foot” policy and the Cuban Medical Professional Parole program before exiting office in January 2017.

Research Associate Jordan Bazak walks through the economic context and social aftermath of a sharp rise in Mexican gasoline prices on January 1st, 2017.

Research Associate Mitch Rogers explores Odebrecht’s guilty plea and the larger context of the widespread corruption in the Brazilian state-run petroleum company. He warns that, given the company’s clout both domestically and abroad, attempting to dismantle it further could upset the Brazilian economy.