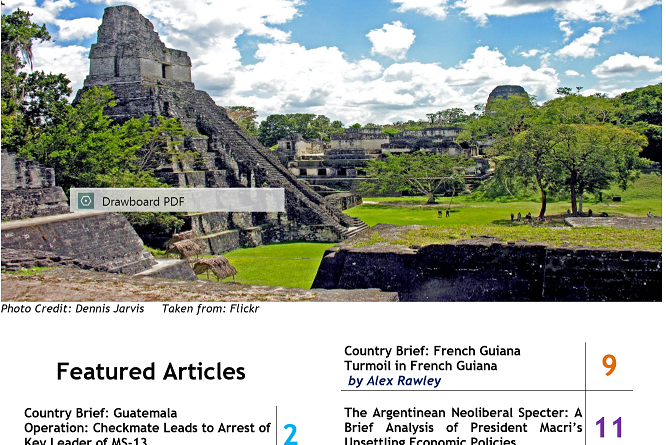 Soliloquy on Political and Human Rights – By Igor Drumond

Research Associate Igor Drummond, analyses the political situation in Brazil and the hypocrisies of the Organization of American States (OAS) in its relative treatment of Brazil and Venezuela. Brazil currently has many issues; rapidly expanding incarceration, politically motivated assassinations of leftists, the detention of journalists, and the coup against President Dilma Rousseff. Despite this, the OAS has yet to put out a single press release on Brazil. Instead they have attacked Venezuela and held several events that criticized the government without giving any representation to government officials. Drummond looks at these double standards and the need for dialogue in solving these problems.

Since winning election to the Presidency of Argentina in 2015, Mauricio Macri has set out to remake Argentina’s economy. Following the populist and protectionist policies of his predecessor, Cristina Fernandez de Kirchner, Macri has implemented a neoliberal agenda to reform the economy. Research Associate Tobias Fontecilla evaluates the economic policies of the Kirchners, and the potential effects of Macri’s new agenda.

The Current State of U.S.-Cuba Relations – By Haley Wiebel

Since 2014 the United States and Cuba have reestablished diplomatic relations, and begun moved away from dogmatic opposition to one another. With President Trump, this progress could be in jeopardy. Research Associate Haley Weibel reports on those who may seek to influence President Trump, and promote a more aggressively anti-Cuban policy. The article examines the criticisms of the Cuban government by U.S politicians, and what the future may hold for relations between the two countries.

On April 11, Pedro Benjamin Rivas Zelaya was apprehended by Guatemalan authorities as part of Operation Checkmate. Zelaya was allegedly the leader of the gang MS-13, and his arrest was the culmination of cooperation between Guatemala, Honduras, El Salvador, and the United States. Research Associate Kate Teran examines the operation and the systems of cooperation between the Norther Triangle, and the United States.

Country Brief: Mexico – Journalism in Mexico: A Fight for Survival – By Mariana Sanchez Ramirez
Freedom of the press remains under siege in Mexico as violence against media organizations continues to mar efforts to freely report on organized crime, corruption, and institutional impunity. On April 2, the El Norte de Ciudad Juárez newspaper released an editorial stating the organization will no longer release print and digital editions of the publication. The newspaper cites the closure of the organization as a means of protest against the violent threats and killings of journalists throughout the country.
Country Brief: French Guiana – Turmoil in French Guiana – By Alex Rawley

French Guiana’s economy was recently brought to a halt by a month-long strike by 37 labor unions in the French overseas department. Research Associate Alex Rawley discusses on the situation. Rawley examines the effects of the strike as well as the demands of the movement. The strikes also had implications for this year’s elections in France, and Rawley looks at the commentary by the major political parties there.

On March 31, the Guatemalan Court for High-Risk Crimes set a trial date for former dictator, José Efraín Ríos Montt for his involvement in the Dos Erres massacre. Due to his poor health he will not attend the trial, nor will he serve a prison sentence if found guilty. Research Associate Erika Quinteros looks at the history of Rios Montt’s rule, the Dos Erres Massacre, and the future of the trial.