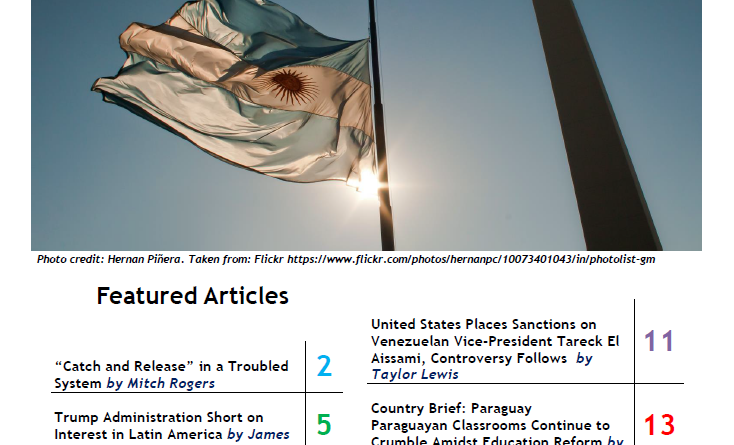 1. “Catch and Release” in a Troubled System by Mitch Rogers

On the border between the United States and Mexico, the term “catch and release” is taking on a new meaning—and it has nothing to do with fishing. “Catch and release” is the phrase that President Trump has used in speeches and executive orders to describe the current U.S. practice of allowing Central American asylum-seeking immigrants on the US-Mexico border to enter the country on parole as they wait for their day in court.

Since its inauguration, the Trump administration has so far acknowledged the existence of only a handful of Latin American countries, and declared three of them to be its enemies: Mexico, Venezuela and Cuba. The new U.S. Secretary of State, Rex Tillerson, was not questioned with any depth about core issues within the Americas or his opinion about some of the controversial leaders of Latin American countries during his confirmation hearings.

From the referendum result in the United Kingdom to leave the European Union to the successful U.S. Presidential campaign of Donald J. Trump, there has been a renewed ideological debate over immigration policy across the globe. To those with cosmopolitan leanings, the idea that a nation would start closing its borders to those seeking relief from perilous environments is unimaginable and betrays the ideal that everyone is a member of the global community. To those with nationalist leanings, however, a renewed focus on border security and immigration controls is a necessary response to escalated concerns regarding public safety threats posed by immigrants.

On Monday, February 13, the United States Treasury placed Venezuelan Vice President Tareck El Aissami on a sanctions list for allegedly aiding international drug traffickers. In doing so, the order froze all of El Aissami’s assets in the United States, which the Treasury claimed to be into the tens of millions of dollars. An official statement from the Treasury’s Office of Foreign Assets Control described the sanction to be a check on El Aissami’s supposed abuse of power in “facilitating shipments of narcotics from Venezuela…as well as [his] control of drug routes through the ports in Venezuela.”

In an issue of the Latin News in January, it was disclosed that Bolivian President Evo Morales plans to run for president in 2019 for a fourth consecutive term despite a constitutional provision that allows for only two consecutive terms. Morales, who is now in his third term, successfully circumvented this rule once before by arguing in 2013 that, as there was now a new constitution establishing Bolivia’s status as a plurinational state, the term he served before the ratification of the new constitution should not be allowed to count against his current constitutional limit.

On Friday, February 24, 2017, U.S. President Donald Trump sat down with his Peruvian counterpart, Pedro Pablo Kuczynski, marking the Commander-in-Chief’s first meeting with a Latin American leader. The distinction was originally reserved for Mexico’s Enrique Peña Nieto, who was to visit the White House in early February. EPN canceled his trip following an inflammatory Trump tweet (the two spoke over the phone instead) clearing the way for PPK to become the first head of state from the region to meet the new president.

On February 19, Venezuelan president Nicolás Maduro stated that 100,000 Colombians had crossed the border last year in search of better economic and social opportunities. Rural areas in Colombia have faced decades of armed conflict which has fueled the droves of Colombian refugees fleeing into neighboring countries. A recent report by the United Nations High Commission for Refugees (UNHCR) stated that around 340,000 refugees have been forced to leave the country.