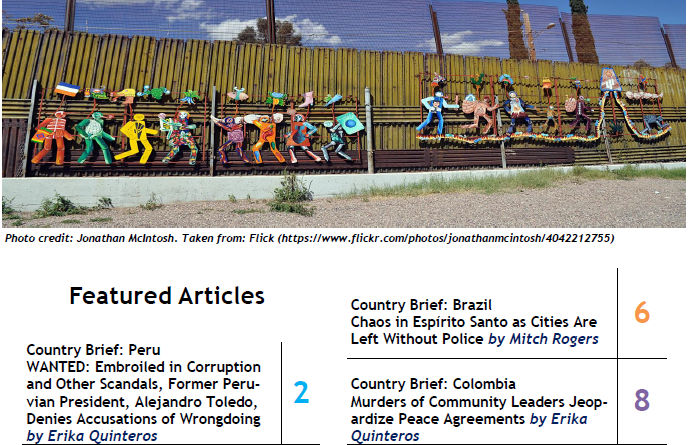 Cooperation: Colombia’s Solution to the Pitfalls of Contract Farming – By Joseph Green

Research Associate Joseph Green examines contract farming, a contractual agreement between a farmer and a buyer, in Colombia. Contract farming provides several advantages for small farmers, especially by promising a secured income with a connection to steady markets and fixed prices. On the other hand, contract farming is inherently imbalanced, with the buyer having the ability to set the price and quality standard for the product in question.

Mexico’s Role & the Re-imagining of NAFTA: A Tricky Window of Opportunity – By Mariana Sánchez Ramírez

During the 2016 presidential campaign Donald Trump repeatedly criticised the North American Free Trade Agreement (NAFTA). Now Trump is president, there are several possible paths forward for the deal that affects large parts of the U.S and Mexican economies. Research associate Mariana Sanchez Ramirez looks at the history of NAFTA, its effects on Mexico and the United States, and Mexico’s options moving forward.

Research Associate Erika Quinteros discusses former Peruvian President Alejadro Toledo’s role in the Odebrecht corruption scandal. Toledo was sentenced to 18 months of preventative detention for paying $20 million USD in bribes for an oceanic highway. Toledo denied the accusations and blamed his political enemies for it, saying he will take the case to the Organization of American States.

Research Associate Kayla Whitlock discusses the decision of Haiti’s Provisional Electoral Council to declare Jovenel Moïse the country’s new president. Losing candidates rejected preliminary results on the grounds of abnormally low voter turnout. Moïse denounced the allegations and submitted to questioning by an investigative judge. However, he was sworn into office in February, and faces a number of challenges including the conditions caused by Hurricane Matthew and a refugee crisis.

Country Brief: Brazil – Chaos in Espírito Santo as Cities Are Left Without Police – By Mitch Rogers

Research Associate Mitch Rogers reports on theft and damages in the Brazilian state of Espírito Santo as the city lacks a police force. Families of police officers protested for better wages and working conditions because police wages have not been raised to match inflation in years. Although police have been trickling back to work and the Armed Forces have been called in, the situation is still tenuous.

117 community leaders and human rights activists were murdered in Colombia in 2016. Of those, at least 21 were members of the left-wing Patriotic March group. The United Nations has expressed concern that these killings may destabilize the recently signed peace accord between the Colombian Government and the FARC. Research Associate Erika Quinteros examines the killings and their possible impacts.

One week in to the Trump administration Research Associate Taylor Lewis looks into changes in U.s-Mexican relations. Trump has promised to build a border wall and make Mexico pay for it, and Mexican President Enrique Peña Nieto finds himself in a difficult situation. Peña Nieto must try to balance national pride, and public dislike of President Trump with the interests of the Mexican economy and relations with their neighbour to the North.