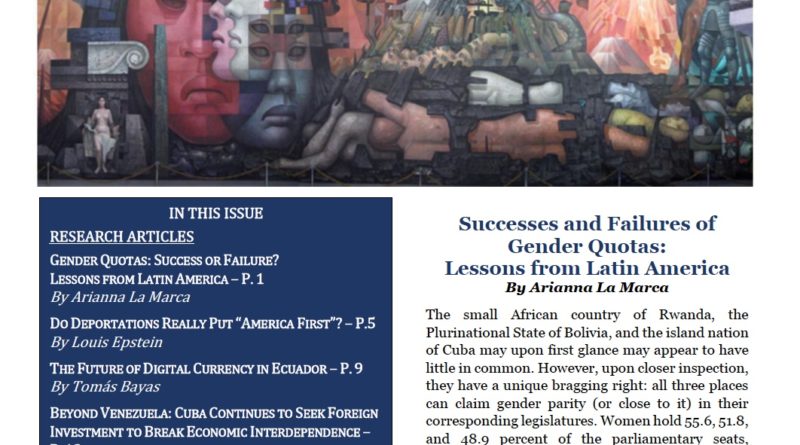 Gender quotas have been employed across Latin America as an antidote to historically constructed and socially maintained gender biases. Some have been markedly successful, while others have failed to have a significant effect on policy outcomes. Research Associate Arianna La Marca explores the intra-regional differences in gender quota legislation using the case studies of Argentina and Colombia.

Donal Trump continued to demonstrate his hard stance against immigration when the administration recently announced that the Deferred Action for Childhood (DACA) program would be closed in the near future. Research Associate Louis Epstein analyzes the ramifications of mass deportations by the currency administration and what are the long lasting impacts to the American industry and economy as a whole.

The Future of Electronic Currency in Ecuador – By Tomas Bayas

Ecuador’s electronic currency project embarks on a different direction as the government has given the administration of it to the private financial sector of the country. After failing to take off in the previous years, the project now resembles more of the already successful programs established in different nations. Research Associate Tomas Bayas analyzes the potential costs and benefits of the newly designed project and Ecuador’s position in the digital currency era.

Cuba’s deep political ties with Venezuela resulted in concrete bilateral economic treaties, further expanded by the ALBA (Bolivarian Alliance for the Peoples of Our America) initiative. These treaties facilitated subsidized oil and other products to the island in exchange for doctors and other personnel. The Venezuelan political and economic crisis resulted in declining trade with Havana. By that time Venezuela was Cuba’s first trading partner. In this article Research Associate R. O. Niederstrasser explores what Cuba is doing to break the interdependence with Venezuela.

Research Associate Eugenia Rosales analyzes the case of Santiago Maldonado, a young Argentine protester, who has been missing for more than a month after a raid conducted by the National Gendarmerie (military police) force on a Mapuche town in Southern Argentina where he and others were protesting for indigenous rights. The Macri administration’s reluctance to investigate the incident of a missing protester characterized the first crucial days following Maldonado’s disappearance. Weeks later, and the question “Where is Santiago Maldonado?” has yet to be answered.

Research Associate Maria Alejandra Silva analyzes Pope Francis recent visit to Colombia last week were he encouraged Colombians to support the peace agreement and to reconcile as a country. This visit came at a critical time in Colombia, with the implementation of the agreement slowing and a growing mistrust of the Santos Administration.

Research Associate Maria Rodriguez-Dominguez analyses how a U.S. Federal Judge in Florida accepted Panama’s extradition request for former president Ricardo Martinelli. Martinelli had been living in Miami since 2015 and is facing charges of political espionage and embezzlement in his home country. His two children are also being investigated in Panama for their involvement in the Odebrecht scandal.