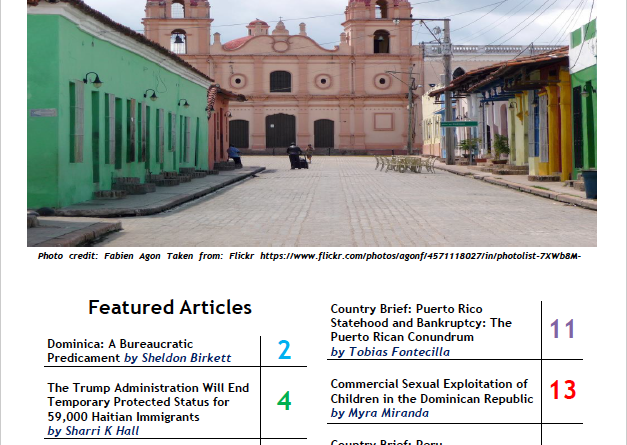 On February 9, 2017, there were allegations of a coup attempt by the opposition United Workers Party (UWP) against Prime Minister Roosevelt Skerrit, after affiliations of illegal diplomatic passport sales to Chinese officials correlated with an increase in foreign direct investment by the People’s Republic of China (PRC). In Dominica: A Bureaucratic Predicament Research Associate Sheldon Birkett delves into many of the development challenges facing the small island nation of Dominica, including the developing geopolitical relations with China, trade liberalization, and corruption in the Dominican bureaucracy. This research article contextualizes Dominica’s current – and future – political-economy within a historical context since the election of Prime Minister Eugenia Charles.

Research Associate Sharri K Hall reports on the Trump Administration’s plans to end Temporary Protected Status (TPS) for 59,000 Haitian Immigrants in the United States. She examines and dispels many common misconceptions about the TPS program. The article then looks at the current situation in Haiti and the future of Haitians living in the United States under TPS, concluding that, for now, the future looks bleak.

Research Associate Alexia Rauen looks at U.S-Cuban Trade relations. She examines the policies of former-president Obama and President Trump towards Cuba, and the difference in policy between the two. Looking forward she notes the imminent retirement of President Raul Castro in Cuba and the uncertain future many in Cuba face.

Research Associate Laura Schroeder looks at Sexual and Gender-based violence in Central America. She looks at the state of misogynist violence in the region and how it provokes migration among women. The article then looks at the dangers faced by women who migrate, and the effects of U.S aid on the situation.

Research Associate Liam Timmons investigates the Chilean customs strike that halted imports and exports from the country. Workers struck over wages, hours, and duties that were not in line with the contract signed with the government. The government and customs union sought yet another contract, the third in recent times, as customs strikes have become a common occurrence in Chile because of working conditions.

Research Associate Tobias Fontecilla examines Puerto Rican statehood and the territory’s financial troubles. The commonwealth has its own constitution but little political power over its own laws and the United States as a whole. Fontecilla makes the case for statehood as a solution to the economic and political issues in Puerto Rico, and advocates for an end to Puerto Ricans being treated as second class citizens.

Research Associate Erika Quinteros reports on the prosecution of former-president of Peru Alberto Fujimori. He faces prosecution for The Pativilca Massacre, in which six men were kidnaped and killed. She reflects on the implications of this trial for the Peruvian justice system.