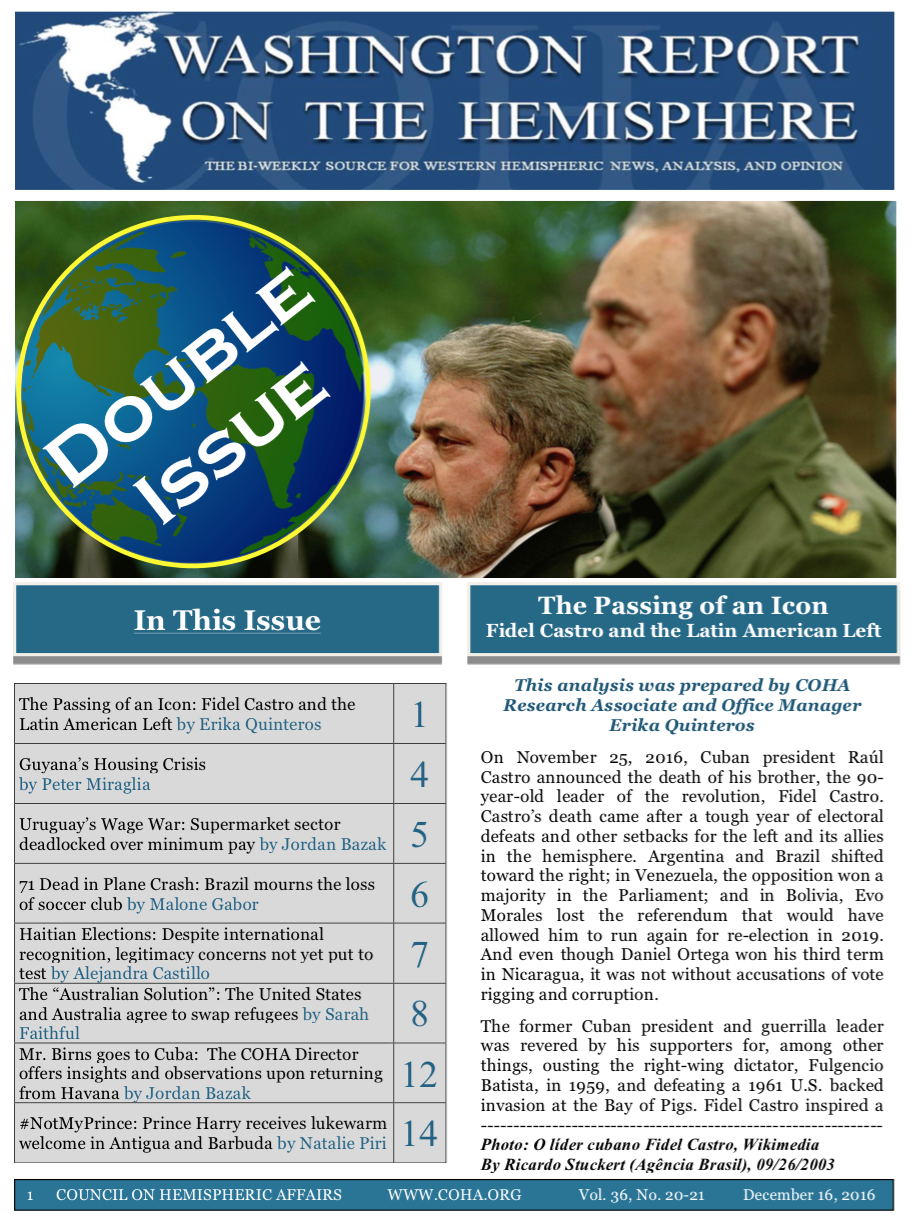 1 – “The Passing of an Icon: Fidel Castro and the Latin American Left ” by COHA Research Associate and Office Manager Erika Quinteros

On November 25, 2016, Cuban president Raúl Castro announced the death of his brother, the 90-year-old leader of the revolution, Fidel Castro. Castro’s death came after a tough year of electoral defeats and other setbacks for the left and its allies in the hemisphere. Argentina and Brazil shifted toward the right; in Venezuela, the opposition won a majority in the Parliament; and in Bolivia, Evo Morales lost the referendum that would have allowed him to run again for re-election in 2019. And even though Daniel Ortega won his third term in Nicaragua, it was not without accusations of vote rigging and corruption.

The former Cuban president and guerrilla leader was revered by his supporters for, among other things, ousting the right-wing dictator, Fulgencio Batista, in 1959, and defeating a 1961 U.S. backed invasion at the Bay of Pigs. Fidel Castro inspired a generation of progressive leaders who, if not unanimously supportive of the Cuban version of socialist revolution, believed in the same cause of promoting social justice and economic equality throughout the region.

In early November, Australian Prime Minister Malcolm Turnbull announced that Australia and the United States had reached an agreement to move refugees stuck in Costa Rica to Down Under and those held up in Australia’s offshore processing centers to the States. The plan would resettle 1,800 asylum seekers presently being held in Australia’s detention camps on Nauru and Manus Island, Papua New Guinea. A similar number of U.S.-bound asylum seekers, fleeing the gang violence, poverty, and severe drought in the Northern Triangle of Central America (NTCA), will be moved to Australia. Washington has yet to confirm the deal publically.

While this seems to be a positive outcome for the refugees currently in limbo, the ‘swap’ begs the question as to why it is necessary in the first place. On the surface, it seems superfluous to trade asylum seekers rather than just accept those already at the doorstep. For Australia, taking in Catholic Central American refugees but denying Muslim Asian asylum seekers exposes the prejudiced beliefs underwriting the country’s immigration policy. The swap is, in essence, a subtle form of people trafficking. Furthermore, Canberra is using the overcrowding in Costa Rica’s facilities to ignore the terrible conditions of its own detention camps. By allowing the transfer, President Obama is condoning, and thus perpetuating, Australia’s inhumane system.

Following the May 2015 Guyanese presidential elections, there was some promise for tangible change in the country. The opposition, a multiethnic coalition comprised of A Partnership for National Unity (APNU) and Alliance for Change (AFC), broke the 23-year uninterrupted tenure of the incumbent People’s Progress Party (PPP). Released one year after the May 2015 election, the Inter-American Development Bank (IDB) sponsored study, The State of Social Housing in Six Caribbean Countries, was intended to showcase a year of economic improvement across the region. Instead, it revealed that Guyana currently has a shortage of 20,000 homes for low-income families and another 52,000 properties that need immediate repair.

The minimum wage is a naturally divisive issue. In the workplace, it pits business owners who want to keep costs low against employees looking for a raise. Within state houses, the measure is either said to fulfill a universal right to a “living wage” or to distort labor markets, raise prices, and enlarge the informal economy by making unskilled workers harder to employ.

In Uruguay, South America’s third smallest nation with the region’s third highest GDP per capita, the debate over the minimum wage for supermarket employees has reached a standstill. For the past five weekends, employees have barricaded dozens of storefronts in the departments of Montevideo, Canelones, and Maldonado to demand an increase in the industry’s monthly minimum wage from 16,000 Uruguayan pesos (UYU) to 20,000 UYU ($668 USD). The protests come after three months of negotiations between the workers, represented by the Uruguayan Federation of Commercial and Service Employees (FUECYS), and their employers, united within the Uruguayan Supermarkets Association (ASU). Last Friday, December 9, the executive branch stepped in last to propose a compromise. While acceptable to the ASU, the government’s deal falls short of the union’s standards, leaving supermarkets as the only major sector yet to reach a salary agreement.

On November 28, a Bolivian charter plane crashed in Colombia, killing 71 of the 77 people on board. Brazil is now mourning the loss of one of its soccer teams, Chapecoense. In addition to members of the soccer team, casualties included over 20 journalists and crew members. Only three soccer players, two crew members, and one journalist survived the tragedy. Although investigations are ongoing, preliminary reports suggest that the plane was experiencing fuel shortages and instrument malfunctions. The pilot requested an immediate emergency landing but the airport was unable to accommodate the plane immediately. The radio then went silent.

After a nearly two-year electoral process, Jovenel Moïse was officially elected president of Haiti, winning 55 percent of the vote in an election involving 27 candidates. In October 2015, Moïse won an initial election, but, despite the fact that most international observers confirmed the results, his opponents denounced widespread fraud and the outcome was annulled. The new election, originally scheduled for October 9, 2016, was postponed until November due to Hurricane Matthew. Meanwhile, the previous president, Michel Martelly, has been out of office since last February and there remain a significant number of vacancies in each legislative house. On November 20, 2016, Moïse won yet again, with 21 percent of the electorate casting ballots, low by most standards but high for Haitian elections whose turnout is often below 20 percent. Still, the low turnout weakens the president-elect’s mandate and violent protests in the election’s aftermath are one of the many public-relations problems that Moïse must face in the wake of his victory.

This fall, on behalf of Her Majesty, The Queen of England, Prince Harry was tasked with undertaking an official visit to the Caribbean. The trip, scheduled between November 20 and December 4, stirred mixed emotions amongst the people of the various islands visited. Prince Harry’s arrival marks the 35th Anniversary of Independence in Antigua and Barbuda as well as the 50th Anniversary of Independence in Barbados and Guyana. The Caribbean islands play an important role within the Commonwealth realm. Although some have been independent from the Crown for 50 years, the islanders still feel a connection to the British Royalty.

This November, in the wake of Fidel Castro’s death, COHA Director Larry Birns embarked on a scheduled trip to Cuba. Alongside two colleagues, Mr. Birns spent just under a week on the island, exploring various communities and neighborhoods in Havana while enjoying the country’s rich culture and friendly citizens. I sat down with the Director to gain his insights into the island’s current condition as well as the reaction of its people to the fast-moving changes including the normalization of U.S.-Cuba relations and the epochal death of Fidel Castro.