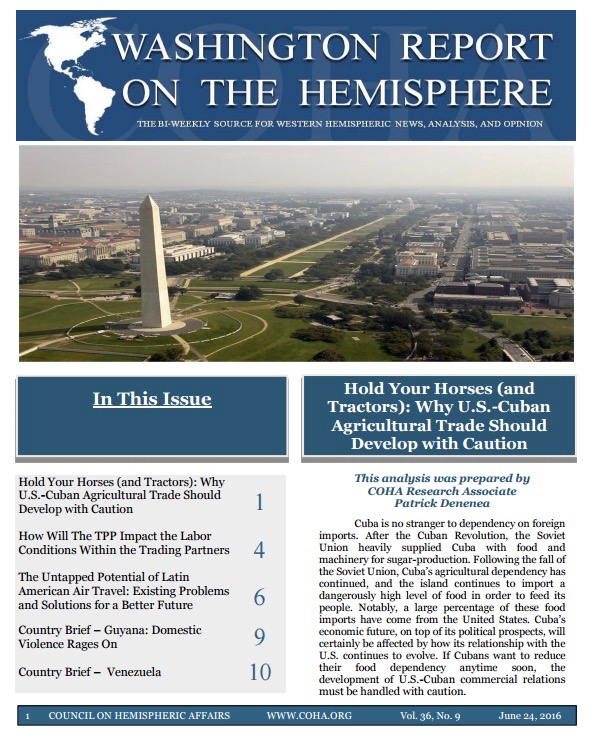 1 – “Hold Your Horses (and Tractors): Why U.S.-Cuban Agricultural Trade Should Develop with Caution” by COHA Research Associate Patrick Denenea

Cuba is no stranger to dependency on foreign imports. After the Cuban Revolution, the Soviet Union heavily supplied Cuba with food and machinery for sugar-production. Following the fall of the Soviet Union, Cuba’s agricultural dependency has continued, and the island continues to import a dangerously high level of food in order to feed its people. Notably, a large percentage of these food imports have come from the United States. Cuba’s economic future, on top of its political prospects, will doubtlessly be affected by how its relationship with the U.S. continues to evolve. If Cubans want to reduce their food dependency anytime soon, the development of U.S.-Cuban commercial relations must be handled with caution.

The Trans-Pacific Partnership (TPP) is a trade agreement between the United States, Australia, Japan, Canada, Malaysia, Mexico, Peru, Vietnam, Chile, Brunei, Singapore, and New Zealand. After several years of negotiations, the agreement was formally signed in February, 2016 and is currently awaiting final ratification. This economic partnership between twelve of the Pacific Rim countries would be considered the “cornerstone” of the Obama Administration’s goals to expand free trade to Asia Pacific countries and to revise the existing North American Free Agreement (NAFTA) among the United States, Mexico, and Canada. During his election, President Obama promised to renegotiate NAFTA in order to prevent the race to the bottom that was triggered by NAFTA’s incentivizing lower production costs through relocating firms to Mexico.

Once a luxury for the wealthy, air travel has become an affordable option for many middle-class families across the globe. However, in Latin America, plane tickets are still very expensive and remain inaccessible to many. A round-trip ticket from Mexico City to Managua, a mere two-hour flight, costs $400 USD, whereas a round-trip to Miami, a three-and-a-half-hour flight, costs $260 USD. A round-trip ticket between São Paulo and Buenos Aires, South America’s two booming economic centers, costs $300 USD even when booking two months in advance. With that money, an individual could buy a transcontinental round-trip ticket in the United States. Several reasons may help to explain why Latin American travel is so difficult and expensive: alternative modes of transportation are popular, airports are hard to get to, and low-cost carriers are scarce. In order for Latin Americans to enjoy the full benefits of flying, the airline industry has to be improved.

On May 26, Lauren Pak published a study of 16 countries with the Latin American Public Opinion Project at Vanderbilt University that found one in four individuals condone or understand a husband hitting his wife if she has neglected her chores. Guyana scored third highest within this study, with 30.8 percent condoning the domestic violence. Along similar lines, the Caribbean American Domestic Violence Awareness (CADVA) organization revealed that, in Guyana, over the first five months of 2016, 10 women have already been killed by their ex-partner, boyfriend, or husband. Both of these statistics highlight the ongoing violence towards women in Guyana and show that the laws currently in place are not strong enough to dissuade domestic violence perpetrators. In the face of the high rates of domestic violence, the government should work to change the tradition of domestic violence as a private affair.

Thought to be the birthplace of the “Pink Tide” movement, Venezuela has, for decades, been seen as an underdog unafraid to defy regional “norms”. Some believe the end is near for the liberal Venezuelan government, because of trends in countries like Brazil and Argentina, which are losing their leftist leaders. Economic struggles and political turmoil are spurring tensions in Venezuela; however, Venezuela is known for defying the odds, and their performance on the soccer field earlier this month is no exception.