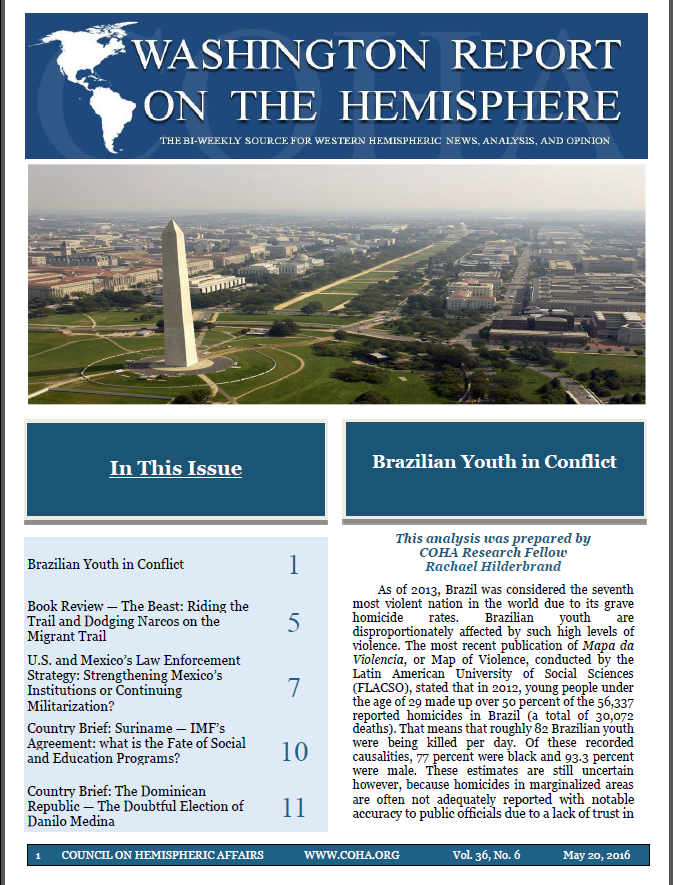 As of 2013, Brazil was considered the seventh most violent nation in the world due to its grave homicide rates. Brazilian youth are disproportionately affected by such high levels of violence. The most recent publication of Mapa da Violencia, or Map of Violence, conducted by the Latin American University of Social Sciences (FLACSO), stated that in 2012, young people under the age of 29 made up over 50 percent of the 56,337 reported homicides in Brazil (a total of 30,072 deaths). That means that roughly 82 Brazilian youth were being killed per day. Of these recorded causalities, 77 percent were black and 93.3 percent were male. These estimates are still uncertain however, because homicides in marginalized areas are often not adequately reported with notable accuracy to public officials due to a lack of trust in state institutions. Since the number of homicides classified or recorded by police is likely to be an inaccurate representation, it is estimated that the actual number of such homicides in Brazil in reality may be 10-25 percent higher than represented. In such a case, Brazil’s total number of deaths is one of the highest in the world, even surpassing last year’s number of deaths in Syria, although it is not the highest on a per capita basis in the world. Yet Brazil, however violent, is not at war. It does not have a declared religious or ethnic conflict, territorial disputes, or a civil conflict—yet more youth are killed per year in Brazil than in many other countries with contemporary armed conflicts. This epidemic of high homicide rates is becoming increasingly attributed to the organized crime and drug trafficking organizations that employ mostly children and operate in many of Brazil’s major cities.

2 – “Book Review – The Beast: Riding the Trail and Dodging Narcos on the Migrant Trail”  by COHA Research Associate Laura Iesue

Oscar Martinez’s: “The Beast: Riding the Rails and Dodging Narcos on the Migrant Trail,” is an eyewitness account of the experiences of Central American migrants who travel on a train nicknamed ‘La Bestia,’ passing through Mexico in the hope of reaching the United States. Originally published as “Los migrantes que no importan” (the migrants who do not matter), Martinez’s book contributes to social science literature on Central-American migration through investigative journalism, revealing the horrors, dangers, and vulnerability posed to migrants risking a journey on ‘La Bestia.’ Martinez’s primary purpose of this book is to show the experiences, risks, and vulnerabilities migrants undergo on their trip north, while showing the precursors and motivations for migration. Focusing mostly on those individuals who are fleeing violence in Central America, he vividly describes the various dangers migrants must endure if they travel north.

While U.S-Mexico relations in combatting drug trafficking have existed since 1987 through a Memorandum of Understanding, Mexico’s weak federal and feeble state institutions have held the nation back from establishing a strong sense of rule of law. This institutional weakness, in addition to accelerating crime rates, has continued to fuel a cycle of distrust towards those sworn to be responsible for ensuring citizen security. Current cooperation amongst U.S. and Mexican agencies focuses on creating a new accusatory criminal justice system in Mexico that will drastically change both efforts to prosecute and prevent drug related crime and violence. Mexico passed a federal constitutional reform in 2008 that required all Mexican states to shift from a written inquisitorial system to a new oral accusatory system by 2016. Yet this is not Mexico’s first attempt to restructure both its political and justice institutions to address public security concerns. Ioan Grillo, author of El Narco and Gangster Warlords has argued that “some of the fundamental problems and core solutions lie in Mexico’s institutions.” Such an argument highlights both the current difficulty and the necessity to create strong trustworthy institutions. Accordingly, U.S.-Mexico cooperation must first prioritize the development of strong institutions to support and sustain the newly introduced criminal justice system reforms. Only through strong institutions can these reforms create incentives to hold public officials accountable if they commit crimes or not fulfilling their duties by reducing corruption. Through the creation of accountable institutions and the demilitarization of current strategies, Mexico could then be relied upon to professionalize its police forces and strengthen public trust in Mexican law enforcement.

1 – “Suriname — IMF’s Agreement: what is the Fate of Social and Education Programs?” by COHA Research Associate Raiesa Fraser

On November 19, 2015, Suriname devaluated its currency by twenty percent. As a result, its currency value has been set at four Surinamese dollars for every one U.S dollar. As of early May 2016, every one U.S dollar is traded for five SRD by the Centrale Bank Van Suriname. A major source of this fall comes from the drop in world prices for the oil and gold that sustain the country’s economy and the ongoing economic recession due to external and internal fiscal deficits as well as the closing of Suralco, a joint American-Surinamese alumina refinery. Despite the recession, Suriname has continued spending on social issues in the country. The combination of spending and revenue shortfalls contribute to the tremendous debt that will continue to accumulate for the next several years.

In the recent 2016 elections in the Dominican Republic, President Danilo Medina of the Partido de la Liberación Dominicana (PLD) was re-elected as president for the next four years. Medina won the elections by a landslide with 61.96 percent of the votes while his rival, Luis Abinader of the Partido Revolucionario Moderno (PRM), received 35.23 percent of the votes. After his electoral victory, Medina made a speech to the opposition in which he mentioned that he would like the opposition party to become an ally of his government. In other words, Medina still wants to be president of all Dominicans regardless of the party that they serve or support. One factor that helped him win his re-election was the support of the people in 14 of the 32 Dominican provinces that did not vote for him in the 2012 elections. It was also the first time that a presidential candidate won an election by a margin above 50 percent since the country’s return to democracy. However, despite his victory, some problems have stained Medina’s image, including high levels of corruption and insecurity, as well as the need to address the lack of social and economic challenges.