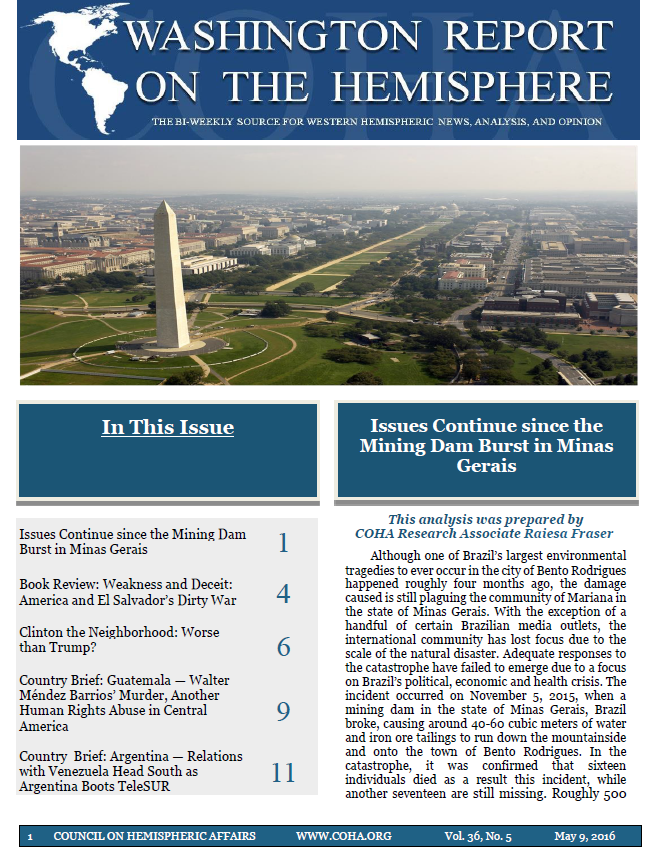 Although one of Brazil’s largest environmental tragedies to ever occur in the city of Bento Rodrigues happened roughly four months ago, the damage caused is still plaguing the community of Mariana in the state of Minas Gerais. With the exception of a handful of certain Brazilian media outlets, the international community has lost focus due to the scale of the natural disaster. Adequate responses to the catastrophe have failed to emerge due to a focus on Brazil’s political, economic and health crisis. The incident occurred on November 5, 2015, when a mining dam in the state of Minas Gerais, Brazil broke, causing around 40-60 cubic meters of water and iron ore tailings to run down the mountainside and onto the town of Bento Rodrigues. In the catastrophe, it was confirmed that sixteen individuals died as a result this incident, while another seventeen are still missing. Roughly 500 people have been homeless, living in cities or hotels nearby, or living with relatives. The waste caused by the spilling entered into the community’s most heavily dependent source of water, the Doce River, which provides the villagers with fish as a source of income while promoting tourism and marine conservation. Now, the area is widely polluted and continues to destroy all forms of aquatic life.

Raymond Bonner’s recently published book, Weakness and Deceit: America and El Salvador’s Dirty War, (OR Books, 2016) is a well written and highly knowledgeable work of investigative journalism that contextualizes how the relatively small country of El Salvador became the center of, and victim to, tragic U.S. foreign policy during the 1980s. The establishment and control of coffee, as the cash crop of the country, became the source empowering the oligarchy. Thus, a select few assumed the role of principal ruling force in El Salvador, prompting the oppressive economic and social issues that increased unceasingly. Adding to the distressing social order of a nation that held a population of less than five million inhabitants was the intensification of military dictatorship occasioning political instability. Such ingrained issues allow for the persistence of a politically repressive, economically and socially unjust Salvadorian rule. Bonner examines the extent to which U.S intervention in El Salvador further provoked turmoil throughout the nation. This writing complements Bonner’s previous book, Weakness and Deceit: U.S. Policy and El Salvador (Times Books, 1984), which provides an insight on the accounts of numerous massacres and repressive stories effected by the government. The discussion presented in his new book confronts and answers lingering questions as to how the U.S. used El Salvador as its proxy, to promote U.S. interests, which, in the long run, led to the fragmentation of Salvadoran institutions.

3 – “Clinton and the Neighborhood: Worse than Trump?” by COHA Research Fellow Peter Bolton

In COHA’s March 22, 2016 issue of the Washington Report on the Hemisphere (Vol. 36, No. 3), Research Associates Jessica Cruz, Melanie Landa and Mercedes Garcia discussed what implications a Donald Trump or Ted Cruz presidency would have for U.S. foreign policy toward Latin America and for Latin Americans living in the United States. With Cruz’s exit and Bernie Sanders’ campaign severely constricted on the delegate count in the Democratic Party primary election, it looks increasingly likely that Trump will compete against Hillary Clinton in the general election this November. It is time, then, to examine what a Clinton presidency might mean for the region and for the Latino population living in the United States.