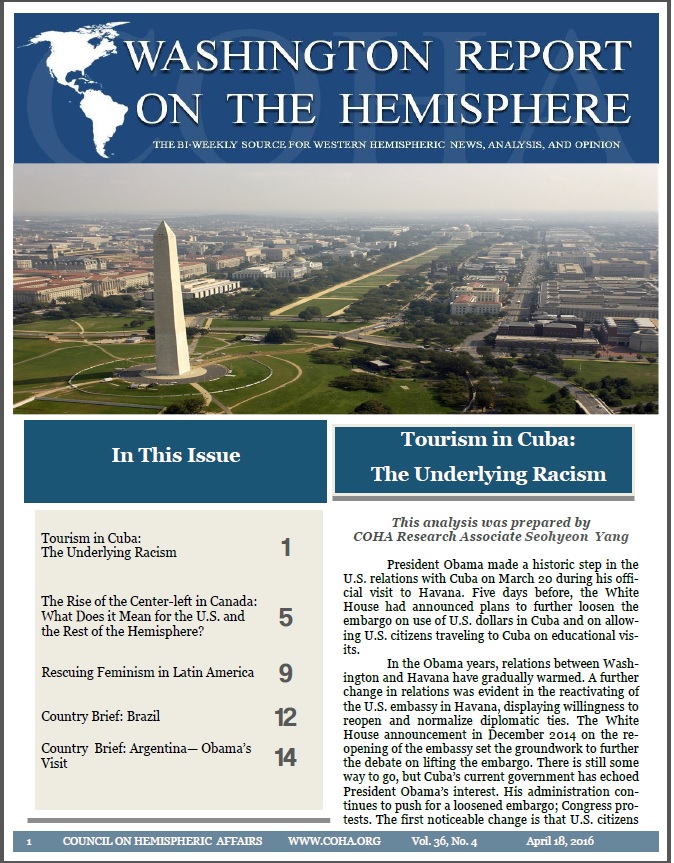 Along with progress in the political relationship between Washington and Havana, expectations are growing. Many scholars suggest that commercial interests will finally make the U.S. Congress lift the embargo. The Cuban government also adapted its interests to this new direction. Cuba is trying to bring hard currency into its economy by developing tourism and creating an environment friendlier to foreign investors, in order to help its struggling economy. Development in this sector will improve the economic situation of Cuba if there is GDP growth in a few years, but it will also widen the income gap between most of the Cuban people who work for the government and people working in the non-state sector led by the tourism industry. More serious, structural inaccessibility blocks blacks, mulattos and mestizos from getting jobs in tourism. The prejudice that white skin is a standard of beauty that whites are better educated creates racial discrimination in the tourism job market, which pursues “good looking” workers in order to present a better image of Cuba to foreign tourists. Staring at the tourist boom just around the corner, most Cubans are feeling excluded and alienated. China is a developing nation that has undergone this income polarization and social disunity, which may haunt it as its economy slows. Cuba’s government, like China’s, has not put a lot of effort into dealing with racial inequality in tourism. As tourism continues to increase Cuba’s GDP, the importance of social unity among different social groups, including race and income, must be brought to top of Cuba’s agenda, or most Cubans’ lives will not improve under the current government.

2 – “The Rise of the Center-left in Canada: What Does it Mean for the U.S. and the Rest of the Hemisphere?” by Research Associate Mercedes Garcia

Justin Trudeau’s ascension to power in Canada has brought hopes and doubts for liberals across the Americas. His progressive domestic policies and some of his foreign policies have been widely applauded. However, his lack of commitment to social justice in neighboring countries to the south has been equally criticized. Civil society organizations did not welcome Canada’s weak response to recent killings of indigenous human rights and environmental activists in Honduras, most notably the murder of Berta Cárceres on March 3. This raised concerns given that Ottawa would seem to be giving higher priority to its economic interests over human rights protection in the region. Trudeau has suggested that Canada’s engagement in the region will consist largely of North American trade-related issues and rely heavily on more collaboration with the United States, thus limiting its margins of independent action in the rest of the hemisphere and ignoring the humanitarian role it could play by pressing for human rights protections. The prime minister’s passive stance may indicate he has no intentions of revoking Harper’s lamentable legacy toward Latin America.  Trudeau’s government needs to stop focusing so much on Washington and expand its fresh and progressive domestic agenda to the entire hemisphere. Is it content to stand on the sidelines and let the U.S. take the lead despite Canada’s potential to project a progressive vision and contribute to positive change in the region?

Women’s movements in Latin America have been present since the beginning of the 20th century following World War I. Feminist reactions followed mobilizations headed by Paulina Luisi (1875-1949) in Uruguay and Bertha Lutz (1894-1972) in Brazil, primary figures in the Pan American feminist movements. Subordination and female discrimination were brought to light by middle-class women who followed initiatives by Luisi, Lutz and others. Main goals of their agenda were political representation, citizenship parity for women, and recognition of equality of the sexes. The campaign grew among women who referred to themselves as feminists and are noteworthy for fighting tirelessly for inclusion in a world ruled by men. Despite advances in women’s representation, 21st century-feminism seems fragmented. Feminism has faced a plethora of issues since its conception. Major obstacles today are the intrinsic conflicts and constant discrediting among feminists themselves. The need arisen for feminists to unmask the archaic idea that they are a single group, and to see themselves as a diverse movement whose origin was based in the battle for women’s equality. Feminism in Latin America needs rescuing both by and from the feminists.