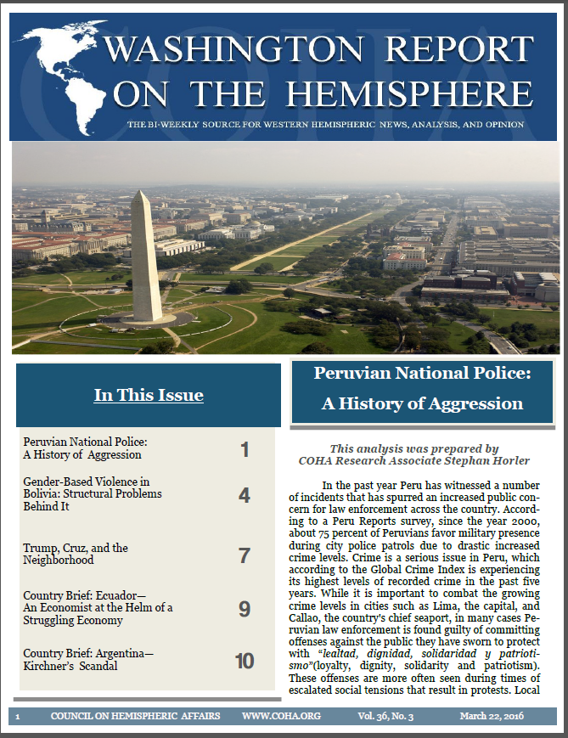 Police forces throughout the globe are implemented to combat crime and maintain civil society. Yet, in many cases such as of Peru, the same individuals tasked with establishing law and order are the found guilty of committing offenses against the public they have sworn to protect. Evidence shows that the PNP has not adopted modern policing practices “to provide the best protection possible” (as it has pledged), but rather has resorted to practices in many ways resembling the kind of actions once condoned against the insurgency of the Maoist guerrilla organization Sendero Luminoso (Shinning Path) in the 1980s and early 1990s. Decades later, though, the government’s negligence in addressing police abuse has resulted in impunity for PNP bellicosity and allowed the institution’s legacy of warlike aggression to continue.

2 – “Gender-Based Violence in Bolivia: Structural Problems Behind It” by Research Associate Misaki Ishibashi

Cultures of machismo, or male chauvinism, are famous in Latin America, but women and girls in Bolivia may suffer more grievously as a result of their gender than their sisters in any other country in the region. Two laws finally enacted to address this superlative national stain have been slow to have their effects felt. A survey conducted from 2003 to 2009 in 12 countries in Latin America indicated that Bolivia had, by far, the highest rates of violence against women within families — about 53 percent, compared with percentages in the other 11 countries surveyed ranging from 17 to 39.7 percent of women.  In the political sphere, more than 4,000 complaints of violence and harassment against female politicians were recorded between 2004 and 2012 by the Bolivian Association of Council Women (la Asociación de Concejalas de Bolivia, or ACOBOL), a nongovernmental organization. The two laws mandate that national and autonomous organizations and public institutions furnish services such as educational programming and shelters, and promote gender equality. In spite of progress on paper, major improvements have not been notably observed, for a number of reasons including structural problems in Bolivia.

The results of 2016 primaries held to date in the United States have set the stage for the rest of the presidential race. As most of the 17 Republican candidates have left the race, including, on March 15, Senator Marco Rubio of Florida, two have emerged as the most popular of the primary season. Front-runner Donald Trump has won 673 delegate votes, followed by Ted Cruz with 410 delegates, a tally that has raised concerns in the United States and throughout the world. For the most part, this year’s Republican primaries turned into let’s-see-who-moves-more-to-the-right contests. The two remaining leading candidates hold harsh conservative views. Especially troubling for Latin America are their enunciated positions on the region. These stances share an underlying similarity toward immigration and illegal immigrants of Hispanic descent in the United States. Although the two Republican candidates have some contrasting views in the realm of foreign policy, neither seems willing to continue a positive relationship with Latin America. So if either were to become president, their policies voiced to date indicate worrisome changes for U.S.-Latin American relations.

1 – Ecuador: An Economist at the Helm of a Struggling Economy by Research Associate Edwin Nieves