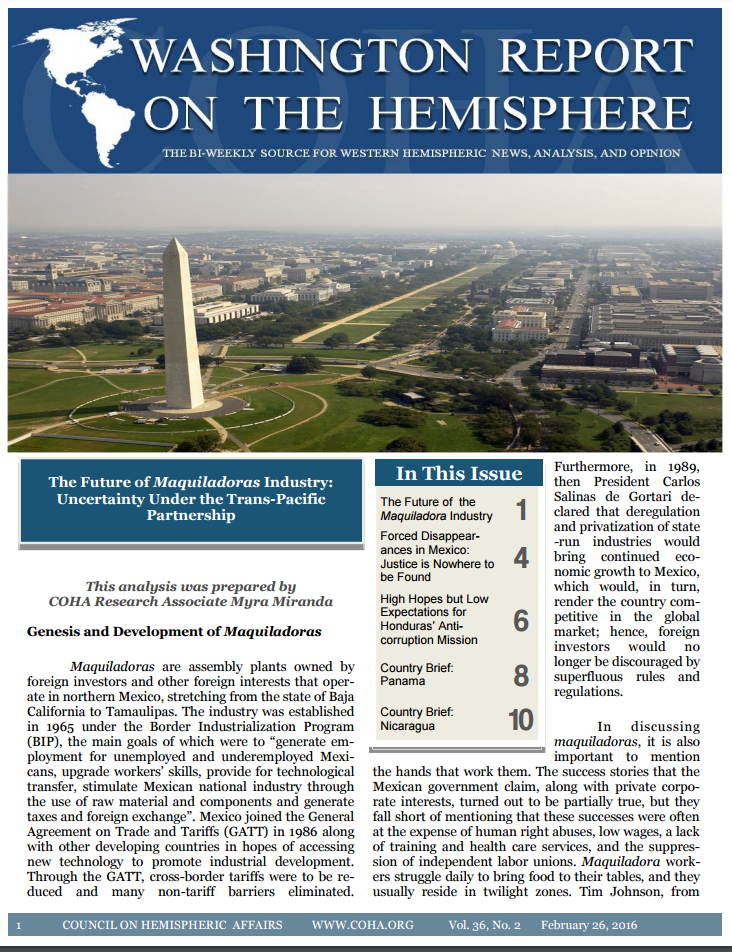 1 – “The Future of Maquiladoras Industry: Uncertainty Under the Trans-Pacific Partnership” by Research Associate Myra Miranda

After an unsuccessful North American Free Trade Agreement (NAFTA), Mexico is engaging in the largest trade agreement in history: the Trans-Pacific Partnership (TPP).  Critics point out that the TPP demands unfair rules amongst unequal economic partners, and that it will only benefit those countries with more stable economies. Maquiladoras, assembly plants located in the northern-Mexican border that skyrocketed after the implementation of NAFTA, are a clear example of the failures of free trade. Maquiladora workers struggle every day against mistreatment and discrimination in the workplace including low wages, unsafe working conditions and gender-based violence. This article will analyze the impact that the TPP will likely have in the Maquiladora sector once it is fully implemented and how it jeopardizes the jobs of hundreds of thousands of workers.

2 – “Forced disappearances in Mexico: Justice is Nowhere to be Found” by Research Associate Mercedes Garcia

The use of Forced Disappearance in Mexico has been a human right abuse crisis of endemic dimensions since the 1970´s, this came to light more than fifteen months ago when 43 students were forcibly disappeared in the state of Guerrero, this atrocity unleashed worldwide protests that until today continue to demand justice. Currently, more than 27,000 people are registered as missing, figures that prove that the government has not been able to address the issue adequately. Last December, as a response to public outcry, Mexican President Enrique Peña Nieto submitted a draft of a general law to prevent and punish the crime of forced disappearance to Congress. However, such bill still awaits their approval, which reflects the legislative branch’s lack of interest in making structural efforts to end the crisis of forced disappearances.Thus, this article provides an analysis of the practice of forced disappearances in Mexico, highlighting the structural weaknesses and lack of political will that have hindered the government’s ability to deal with the issue. The article also underlines the implications that forced disappearance have on the victims and their families while stressing the need to strengthen legislative mechanisms as a first step to bring about solutions to the nightmare of forced disappearance in the country.

Honduras has struggled with corruption and violence in the 21st century. The Honduran judicial system has made strides in reforming itself but the Honduran people are not satisfied yet. Inspired by neighboring Guatemala’s successful anti-corruption mission, Honduran protesters demanded their own international corruption mission. What President Hernandez and the OAS gave them was the Misión de Apoyo Contra la Corrupción y la Impunidad en Honduras (MACCIH). However, the MACCIH will face obstacles along the way to reforming Honduras’ justice system. This article will explore the grievances of the Honduran people and how President Hernandez has or has not addressed them. It will establish to strengths and limitations of MACCIH and how it might compare to Guatemala’s successful CICIG. Lastly, the article will explore Honduran’s reactions MACCIH’s and its potential to address the issues facing Honduras’ judicial system.