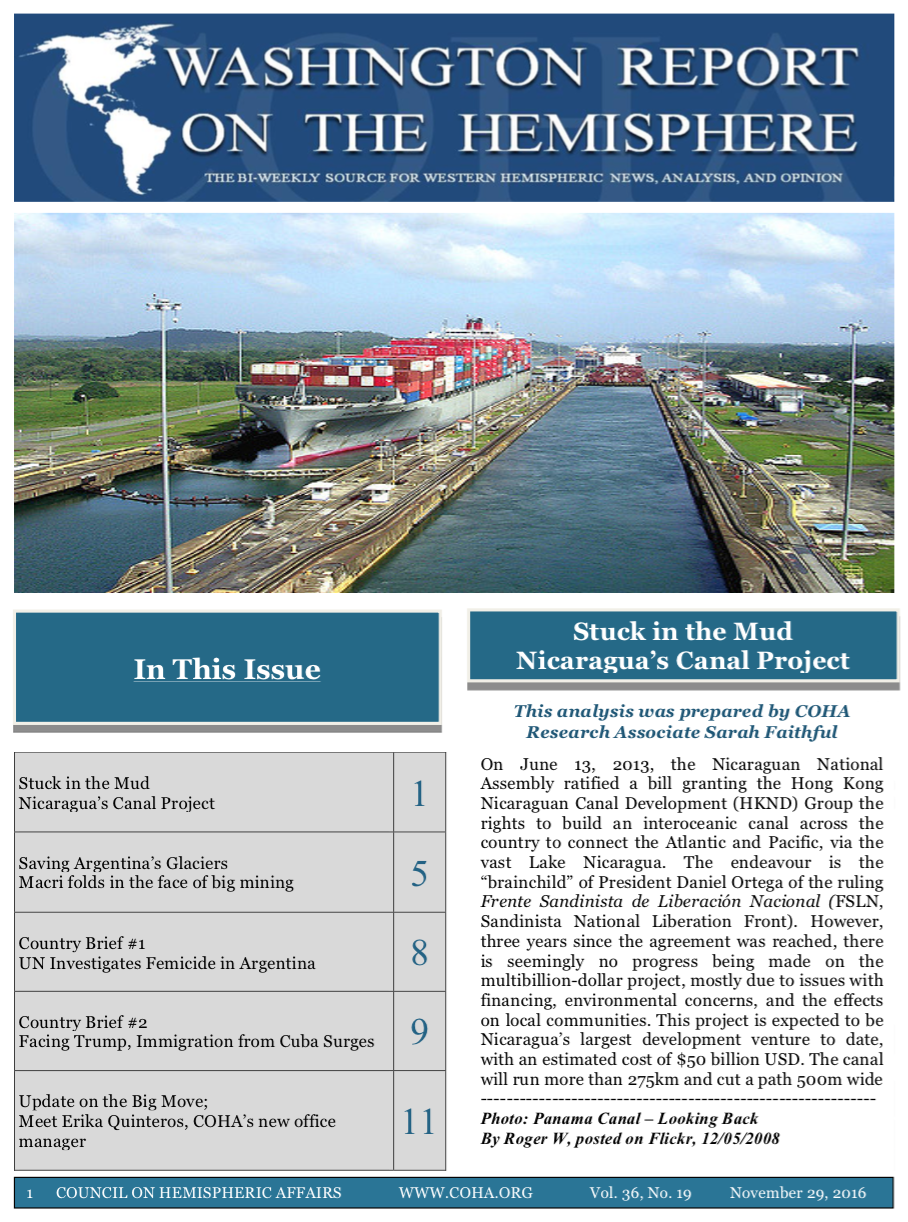 On June 13, 2013, the Nicaraguan National Assembly ratified a bill granting the Hong Kong Nicaraguan Canal Development (HKND) Group the rights to build an interoceanic canal across the country to connect the Atlantic and Pacific, via the vast Lake Nicaragua. The endeavour is the “brainchild” of President Daniel Ortega of the ruling Frente Sandinista de Liberación Nacional (FSLN, Sandinista National Liberation Front). However, three years since the agreement was reached, there is seemingly no progress being made on the multibillion-dollar project, mostly due to issues with financing, environmental concerns, and the effects on local communities. This project is expected to be Nicaragua’s largest development venture to date, with an estimated cost of $50 billion USD. The canal will run more than 275km and cut a path 500m wide and 25 meters deep, all to be completed within five years.

Route 7 in the province of Mendoza, Argentina is the road to the rooftop of South America. The two-lane highway winds upwards from the town of Uspallata, following the path of the Mendoza River between the snow-capped ridges of the Andes Mountains. It passes the ski slopes of Los Penitentes and Puente del Inca, a splendid rock bridge dyed orange, yellow, and green by mineral-rich waters. Further up the road are the remnants of the Trans-Andean railroad, in operation from 1910 to 1985, and, near the top, a clear view of La Aconcagua, the highest peak in the Western Hemisphere.

Although the rugged Andes may feel a world apart from Argentina’s vast flat interior, Las Pampas, or its sprawling capital of Buenos Aires, they are an integral part of country’s ecology and economy. Alpine streams, like the Mendoza, provide drinking water, hydroelectricity, and irrigation for local communities. They also form the headwaters of the Salado and Parana Rivers near which much of the country’s population resides. From Patagonia to Jujuy, the mountain range’s unique beauty attracts travelers from around the world. Meanwhile, the wine, olive oil, and fruit grown in the dry valleys below stock the nation’s cupboards. Beneath the peaks and glaciers lie vast reserves of natural resources—from oil and natural gas to copper and gold—whose extraction creates thousands of jobs and fills public coffers.

During the past year, Argentina has experienced a series of highly publicized incidents of femicide and other acts of violence against women, once more calling into question the nation’s human rights record. One of the most talked about cases, which has reached beyond major domestic news outlets, is that of of Lucía Pérez, a sixteen-year-old girl from Mar del Plata. In the middle of October, she was drugged, repeatedly raped, and killed by two men who then cleaned up her body, dropped it off at a hospital, and tried to pass off her death as the result of an overdose. When it was clear to authorities that her body was subjected to extreme sexual violence, Argentina once again saw the breakout of national protests, demanding the government take steps to address what has become to be seen as an epidemic. Their rallying cry of Ni Una Menos, “Not One Less,” is reflective of both the support for women’s empowerment and equal representation, as well as the simple demand that not one more woman is the victim of an act of violence perpetrated by a male.

Despite the progress made in reestablishing relations between Cuba and the United States over the past two years, there has been a surge of Cuban immigrants coming into the United States by sea. This correlation can appear illogical since travel restrictions have been relaxed and would-be refugees have enjoyed more freedom of mobility, but this trend is in fact quite logical.

Since 1995, the United States has a unique immigration policy towards Cuba called the “Wet Foot, Dry Foot” policy. “Dry foot” immigrants are Cuban nationals who have reached U.S. soil, mostly after crossing the short distance in between Cuba and Florida, by sea. Unlike immigrants coming from other countries, they are then put on the fast track towards U.S. citizenship. The “Wet Foot” designation, on the other hand, refers to Cuban migrants that have been stopped at sea who then must be returned to Cuba. This policy was negotiated as a result of the migrant crisis in 1994, during which several Cuban citizens died at sea, after then-President Fidel Castro decided to allow Cubans to “leave the island by whatever means,” in order to protect the lives of Cubans at sea and to limit the number of refugees entering the United States. There are major concerns that this policy actually encourages Cubans to risk sailing through the Caribbean Sea in homemade boats that are by no means durable enough for the trip. Aside from Cubans, Haitian refugees were victimized as a result of this strategy.