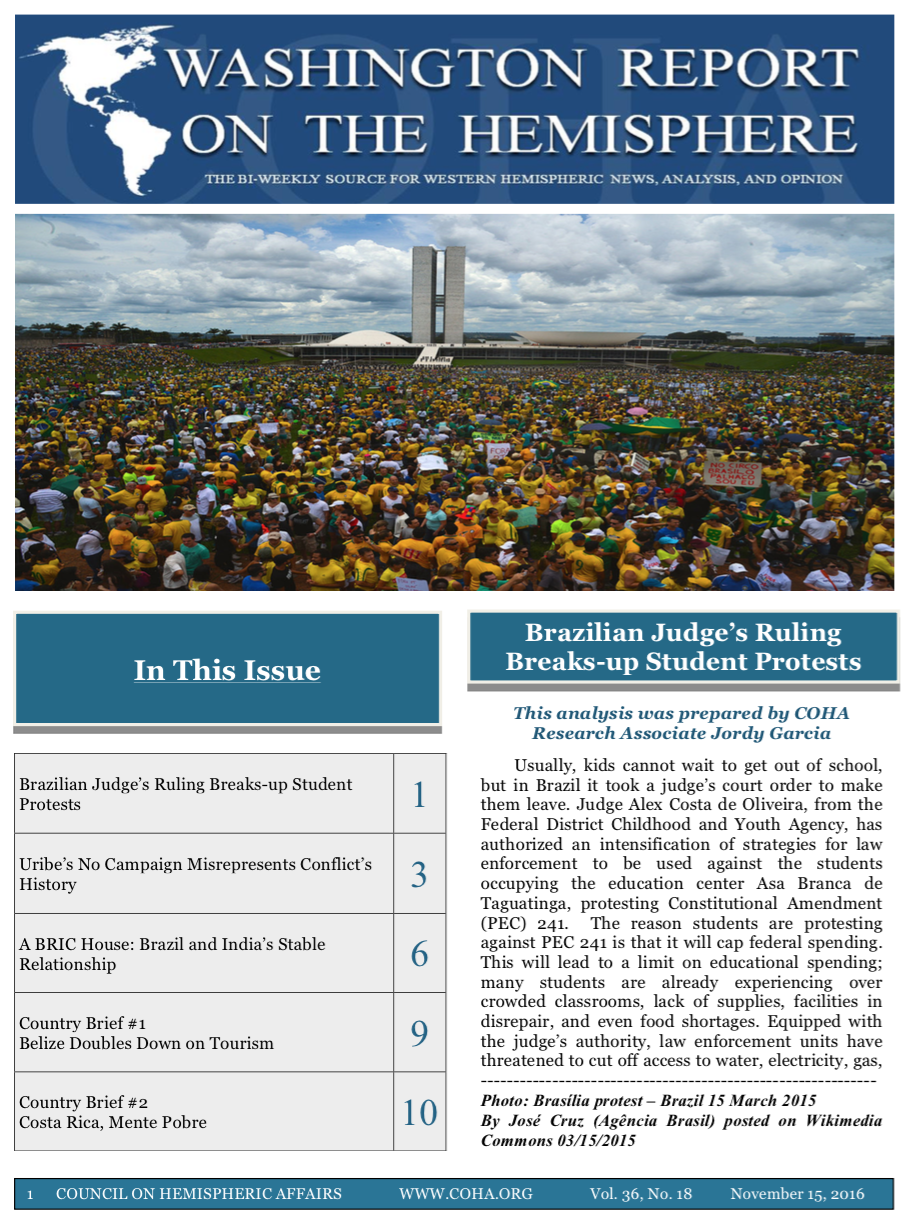 Usually, kids cannot wait to get out of school, but in Brazil it took a judge’s court order to make them leave. Judge Alex Costa de Oliveira, from the Federal District Childhood and Youth Agency, has authorized an intensification of strategies for law enforcement to be used against the students occupying the education center Asa Branca de Taguatinga, protesting Constitutional Amendment (PEC) 241. The reason students are protesting against PEC 241 is that it will cap federal spending. This will lead to a limit on educational spending; many students are already experiencing over crowded classrooms, lack of supplies, facilities in disrepair, and even food shortages. Equipped with the judge’s authority, law enforcement units have threatened to cut off access to water, electricity, gas, and food, block access to third parties, and use “sound instru-ments” with the apparent goal of “physical isolation and sleep depriva-tion.” Such tactics, specifically with the intent of sleep deprivation and isolation, have gained a significant amount of infamy in their connection to U.S. intelligence agencies, and their use of them to interrogate suspected terrorists. Such a history begs the question: if these tactics are usually reserved for high-risk issues such as terrorism, is it really acceptable to use these methods against children and students asking for better school conditions and resources?

Throughout of his tenure, former Colombian President Álvaro Uribe relentlessly pushed for direct military confrontation with guerrilla groups, leading to drastic losses among the Revolutionary Armed Forces of Colombia (Fuerzas Armadas Revolucionarias de Colombia, FARC). As a result of this surge, thousands lost their lives—not only combtants on both sides, but also civilians in alleged “false positive” killings. The term “false positive” refers to the alleged killings of hundreds of innocent civilians by military and paramilitary forces who then dressed up the bodies as FARC rebel fighters. Although Uribe’s connection to these killings still has not been definitively proven, it would be hard, however, to present a convincing argument that as president he was unaware of the actions of his military. If his alleged role is ever proven, he could be prosecuted for human rights violations. When put into context, this may explain the fierce position of the former president against Santos’ peace agreement. The opposition campaigned tirelessly to achieve their victory. During the referendum campaign, Uribe traveled to every corner of the country employing propaganda techniques to convince the people to back him. The use of scare tactics and misinformation played a pivotal role within the campaign. All of this begs the question: Why did Uribe want to halt the peace process so badly and what was it about Uribe’s role within the No Campaign that made it so successful?

Amidst a session of turmoil in Latin America, ranging from rioting miners in Bolivia, the Venezuelan economic crisis, to the political upheaval in Brazil, the worsening state of education has been overshadowed and atrociously neglected. Currently, there are 165 million youth under the age of 15 in Latin America, of which 13 percent of this demographic, approximately 22 million children, are annually vulnerable of either not consistently attending school or are expected to drop out altogether. In identifying and deconstructing the various factors that perpetuate the poor quality of Latin American education, central themes include issues of internal funding imbalances, the correlation between poverty and school incompletion rates, and the absence of international aid.

Tourism continues to be one of the most important sectors of Belize’s economy. Since 2007, the industry contributed over 25% of all jobs and made up over 15% of the country’s total GDP. A report by the Belize Tourism Board reveals that during the first quarter of 2016 tourist arrivals registered an all-time high, with a 16.9 percent increase in overnight tourist arrivals compared to 2015’s first quarter. These numbers are encouraging, indicates the Caribbean Journal, that claim Belize is having its “best year ever” in spite of the disquiet generated by the murder of ABC7 web news producer Anne Swaney on January 15. In a response to this homicide, ABC7, along with a couple other North American news sources, published articles casting doubt on the reliability of the Belize police, citing State Department studies that reveal alarming figures that indicate convictions in only three percent of all cases are solved.

The institutional infrastructure of Costa Rica’s mental health system is at a breaking point. Underfunding is exacerbated by unequal access, sharpening a crisis that is especially troubling for the nation’s youth. As evidence and studies corroborate the poor quality of the nation’s mental health system, it is of the utmost urgency that the federal government and President Luis Guillermo Solís address these issues as soon as possible.

For Alberto Morales, director of the National Children’s Hospital Adolescent Health Clinic, the worsening conditions are similar to “a pressure cooker whose top is about to blow.” In a survey conducted by Morales’ clinic in April of 2014 of over 3,000 high school students, 13 percent of them indicated that they had had suicidal thoughts, a figure comparable to that found among U.S. students. For adolescents who received services at the clinic, 30 percent had suicidal thoughts in the past year and ten percent had attempted suicide. Thus, at a time where services are most crucially needed, coupled by increased academic pressures and other stressors, the availability of such clinics for Costa Rican youth has been drastically reduced over the past two decades.