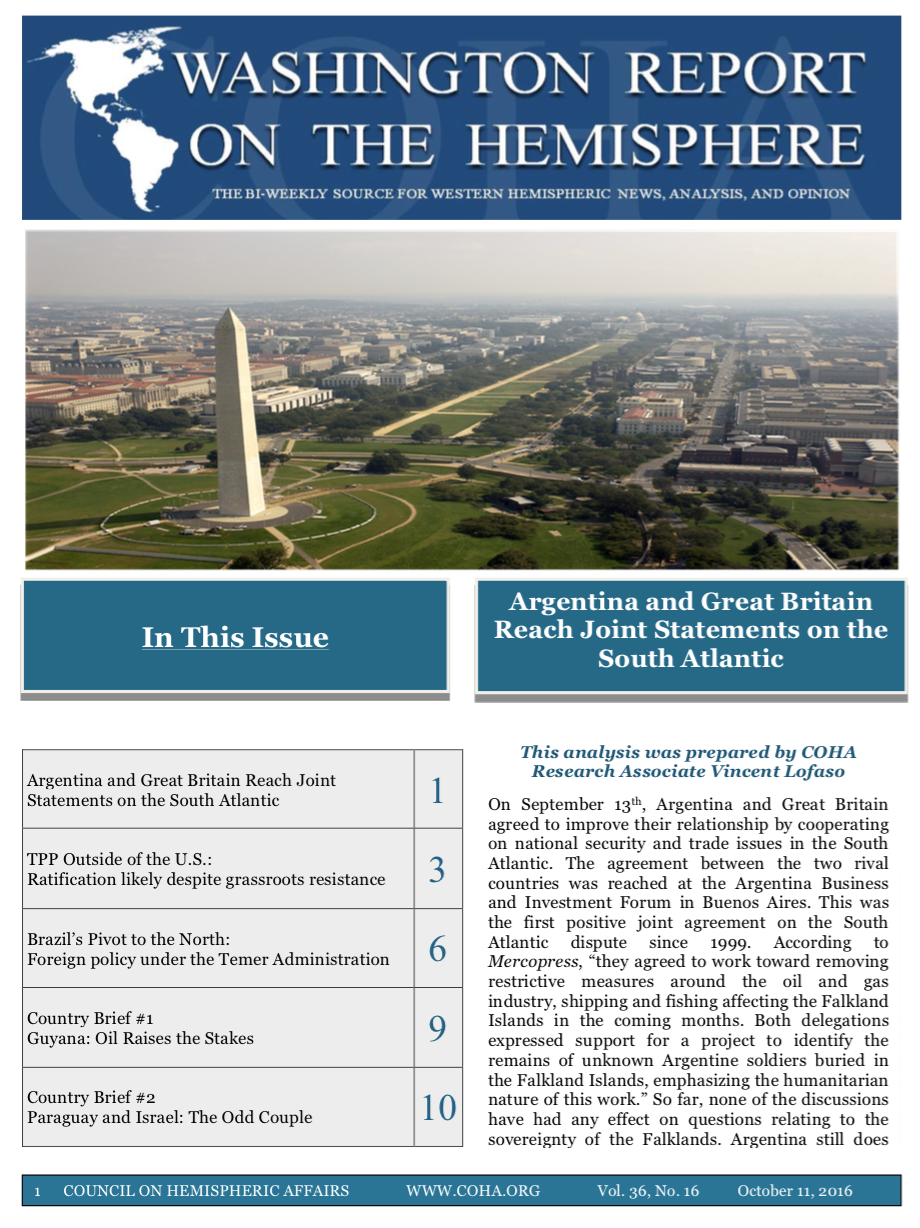 On September 13th, Argentina and Great Britain agreed to improve their relationship by cooperating on national security and trade issues in the South Atlantic. The agreement between the two rival countries was reached at the Argentina Business and Investment Forum in Buenos Aires. This was the first positive joint agreement on the South Atlantic dispute since 1999. According to Mercopress, “they agreed to work toward removing restrictive measures around the oil and gas industry, shipping and fishing affecting the Falkland Islands in the coming months. Both delegations expressed support for a project to identify the remains of unknown Argentine soldiers buried in the Falkland Islands, emphasizing the humanitarian nature of this work.” So far, none of the discussions have had any effect on questions relating to the sovereignty of the Falklands. Argentina still does not recognize the United Kingdom’s possession of the islands even though the Falkland Islanders, also known as Kelpers, overwhelmingly want to remain part of the UK. Great Britain still recognizes the Kelpers’ right to self-determination. The Argentine Government claims that the islands have always belonged to Argentina and it is their goal to maintain the Malvinas as sovereign territory.

2 – “TPP Outside of the U.S.: Ratification likely despite grassroots resistance” by Jordan Bazak

In this bizarre U.S. presidential election cycle, few issues have defied conventional wisdom quite like trade policy. The loss of manufacturing jobs, a growing trade deficit, and rising income inequality have led parties and individuals to reconsider their traditional stance on free trade.

The current debate focuses on the Trans-Pacific Partnership (TPP), a multilateral trade deal signed last February by 12 Pacific Rim countries. Before it can take effect, the agreement must navigate domestic ratification processes in each member state.

In the United States, TPP’s fiercest opponent is Donald Trump, the candidate of the historically pro-free trade Republican Party. Meanwhile, the Democratic Party’s nominee, Hillary Clinton, also rejects the agreement, reversing her previous stance as Secretary of State. Despite criticism from both major candidates, sitting President Barack Obama is leading a last ditch effort to push through the TPP before the end of his second term.

3 – “Brazil’s Pivot to the North: Foreign Policy under the Temer Administration” by Laura Sholtz

On August 31, Brazilian President Dilma Rousseff was impeached and removed from office by the Brazilian Senate. The impeachment capped a turbulent year of political uncertainty and popular protest in Brazil as the country weathered a difficult economic recession and countless allegations of corruption. The same day, former Vice President Michel Temer assumed the full role of president after three months of interim governance.

Although analysts have focused on proposed changes to domestic policy, the new administration’s shift in foreign priorities is equally notable. Temer appoint-ted former Senator José Serra as Foreign Minister during the first days of his interim government in May and wasted no time after President Rousseff’s impeachment before traveling to the G20 summit in China on September 2.

Before his term expires in 2018, Temer will manage Brazil’s regional alliances in Latin America and its behavior in multilateral institutions. He will also have to make important decisions about trade policy, foreign investment, and diplomacy as he tries to pull the Brazilian economy out of the current recession. While it is early to judge Temer’s geopolitical actions outside of his blockage of a Venezuelan Mercosur Presidency, indicators point to a period of cautious change in the economic paradigm of Brazilian foreign policy after 14 years of rule by Rousseff’s Workers’ Party (Partido dos Trabalhadores, PT).

On September 5, the Israeli embassy in Asunción, Paraguay held its official reopening ceremony after fourteen years of inactivity due to budget constraints. Symbolic in nature, the reemergence of the new embassy represents the ongoing counterterrorism partnership between the two countries. Although Paraguay is a seemingly unlikely ally of Israel in the global war on terrorism, because of its record of political instability, the landlocked South American country offers virtually unparalleled access to the Tri-Border Area (TBA), the junction of Brazil, Paraguay, and Argentina. Due to the region’s history of lawlessness and illicit smuggling, Israel, as well as the United States, has claimed various Islamic extremist groups have established a presence in the TBA, in particularly Hezbollah. Although these claims remain sketchy and unconfirmed, Paraguay is still geo-strategically important to the West, especially after the 1994 AMIA (Argentine Israelite Mutual Association) bombings in Buenos Aires, which resulting in the Argentinian government formally accusing the Iranian government of coordinating the deadly attack in 2006. From the Israeli perspective, the corrupt, obstructionist government of Paraguay is very appealing because it ensures little bureaucratic impedance to counterterrorism operations in the country. On the other hand, from the Paraguayan outlook, this alliance provides the country with an opportunity to redeem itself, following its troubling “constitutional coup” in 2012, in which former President Fernando Lugo was controversially impeached by the Congress of Paraguay.

The extraction, processing, and export of oil could have a significant impact on the Guyanese economy. Although Guyanese workers will not exclusively staff the oil operations, ExxonMobil has set a target that between 75 and 95 percent of workers on the oil rigs should be Guyanese. The Minister of State, Joseph Harmon, has also emphasized the need for job training programs to improve the skills and depth of involvement of Guyanese workers in post-extraction processing industries. Most importantly, the government of Guyana will retain approximately half of the estimated revenues from the sale of oil, which could provide a much-needed boost for this small and traditionally poor South American country.