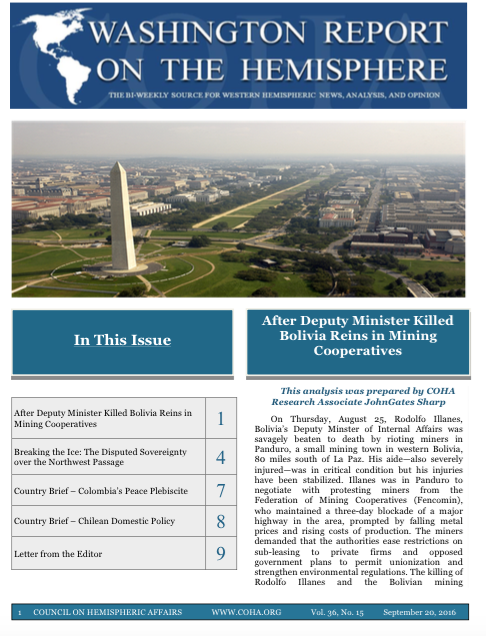 On Thursday, August 25, Rodolfo Illanes, Bolivia’s Deputy Minster of Internal Affairs was savagely beaten to death by rioting miners in Panduro, a small mining town in western Bolivia, 80 miles south of La Paz. His aide—also severely injured—was in critical condition but his injuries have been stabilized. Illanes was in Panduro to negotiate with protesting miners from the Federation of Mining Cooperatives (Fencomin), who maintained a three-day blockade of a major highway in the area, prompted by falling metal prices and rising costs of production. The miners demanded that the authorities ease restrictions on sub-leasing to private firms and opposed government plans to permit unionization and strengthen environmental regulations. The killing of Rodolfo Illanes and the Bolivian mining cooperatives’ protests force us to question whether they have strayed from their intended structure and purpose and thus should now be regulated like private corporations.

2– “Breaking the Ice: The Disputed Sovereignty over the Northwest Passage” by Research Associate Sarah Faithful

In August 2007, the Northwest Passage was declared ice-free for the first time since satellites starting observing the area in 1978. This observation has sparked interest around the world, opening the possibility for new trade routes, resource extraction, and tourism. It has also raised red flags throughout the environmental community, as significant ice cover reduction shows the critical nature of climate change in the north. For many companies, an open Northwest Passage would provide a faster route to Asian markets than the Panama Canal. For instance, in 2014, a vessel shipping nickel from the

Canadian Royalties mine in Northern Quebec to Bayuquan, China navigated the Passage cutting the distance by 40 percent and saving more that 1,300 tons of greenhouse gas emissions. Such ventures have caught the eye of many countries, including the United States and China, who want to use this new trade route for their own commercial benefit. However, Canada, the country through which most of the Northwest Passage flows, is aware of the possible environmental impact that could be caused by increased traffic through the area. This has resulted in the opportunity for Canada to reopen an age-old debate: who, if anyone, has sovereignty and jurisdiction over the Northwest Passage?

With the ink on the Colombian peace agreement now dry, the Government and Revolutionary Armed Forces of Colombia (FARC) leaders must now await the results of the people’s referendum. As the date of the vote is fast approaching both the ‘yes’ and ‘no’ campaigns are hard at work trying to secure a victory.

In recent years, Chile has been referred to as one of the most stable, prosperous countries in Latin America. With minimal perceived corruption, low levels of violence, and relative economic success, Chile has been able to focus on domestic developmental policies that its neighbors do not have the luxury to address. Since 2014, Chilean President Michelle Bachelet has campaigned for free public education. Two years later, however, only a third of students are receiving full tuition. Although affordable education is a major step toward the modernization of Chile’s workforce, the directive has faced significant opposition. Critics argue that having tuition covered by public handouts does not address the underlying economic reasons for overinflated tuition costs. For its supporters, however, the policy has not been implemented fast enough. Disempowered students have been rioting to draw attention to the slow expansion of free higher education. In May, after protests turned violent, University of Santiago’s student union leader, Marta Matamala, stated that, “‘[the students] are going to stay on the streets. From today onward, we expect that the protests will only intensify.’” Chilean students are determined to hold the government accountable for its promises.