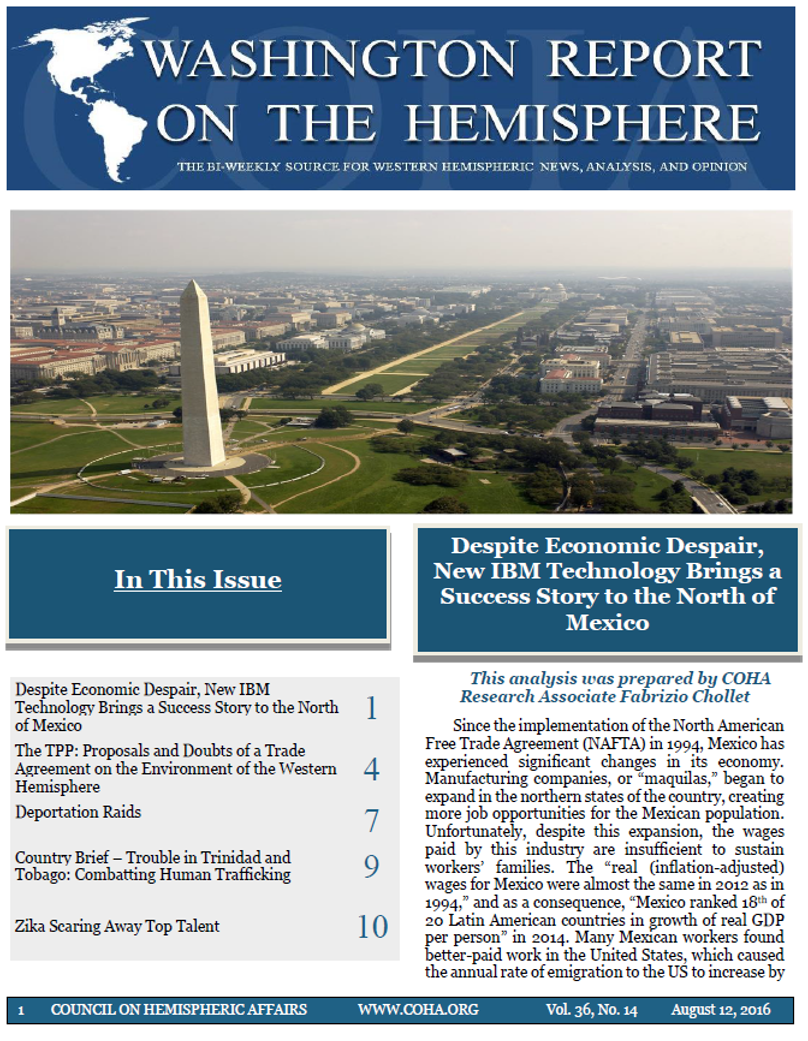 Since the implementation of the North American Free Trade Agreement (NAFTA) in 1994, Mexico has experienced significant changes in its economy. Manufacturing companies, or “maquilas,” began to expand in the northern states of the country, creating more job opportunities for the Mexican population. Unfortunately, despite this expansion, the wages paid by this industry are insufficient to sustain workers’ families. The “real (inflation-adjusted) wages for Mexico were almost the same in 2012 as in 1994,” and as a consequence, “Mexico ranked 18th of 20 Latin American countries in growth of real GDP per person” in 2014. Many Mexican workers found better-paid work in the United States, which caused the annual rate of emigration to the US to increase by 74 percent between the years of 1994 to 2000. Many recent college graduates in Mexico are similarly affected by this job crisis, often seeking jobs in the United States in order to support themselves. Thousands of workers cross the U.S.-Mexico International border every day to pay for Mexican living expenses with U.S. dollars. The commute from a home in Mexico to a job in the U.S. takes approximately 4 hours a day. However, some Mexican residents of the North can now avoid this commute thanks to the job opportunities that International Business Machines (IBM) created with their technological contributions to the enterprise Gasmart, a Mexican gas company. The adoption and development of new IBM technologies and the expansion of Gasmart in the Northwest of Mexico has contributed to an increment in job openings and higher wages. The new IBM technologies are advancements that the general public has never seen and have brought economic prosperity to Gasmart and to its workers.

2 – “The TPP: Proposals and Doubts of a Trade Agreement on the Environment of the Western Hemisphere” by COHA Research Fellow Rafael Perez and ResearchAssociate Pedro Izquierdo

While many people find trade agreements to be a useful tool to promote economic cooperation among countries, some see it as a double-edged sword as it can degrade the environment both directly and indirectly. The environmental effects of international trade between economically rich countries of the Global North and developing countries of the Global South are exacerbated by proposed free trade agreements that limit the South’s sovereignty and promote policies that guarantee the rights of northern firms. Free trade agreements incentivize the relocation of multinational corporations from the Global North to the Global South in order to reduce economic costs and increase profits. With the growth of transnational firms in the developing world, greenhouse gas emissions (GHG) increase in the Global South. Any decisions taken by countries with strong market power will affect not only their environments, but also those of multiple low-income countries with weaker economies.

According to the National Institute of Justice, human trafficking involves “the recruitment, transportation, transfer, harboring, or receipt of persons by improper means (such as force, abduction, fraud, or coercion) for an improper purpose including forced labor or sexual exploitation.” For many years and to this day, human trafficking has been plaguing the Latin American and Caribbean region. Specifically in Trinidad and Tobago, many adults and children find themselves victims to trafficking. A source, transfer point, and endpoint for this crime, Trinidad and Tobago has a government that demonstratively has failed to tackle this important human rights issue. For this reason, a number of lawmakers and officials in the Caribbean nation need to implement more effective policies to combat human trafficking and guarantee an appropriate legal process for its perpetrators.

After last appearing in the 1904 Olympic Games in Saint Louis, the sport of golf is finally scheduled to return to the world’s most famous sporting event this summer in Rio de Janeiro. The International Olympic Committee (IOC) decided in 2009 during its 121st session that golf would be reintroduced to the sporting spectacle. In addition, the IOC confirmed that rugby would also be making its return, while kitesurfing is set to debut as an Olympic sport. A brand new Olympic golf course was built for the event within the Marapendi Natural Reserve in the West Zone of Rio. However, what was planned as a glorious homecoming is now coming apart due to heightened concerns with Zika virus, causing many of the world’s top players to skip the Games.