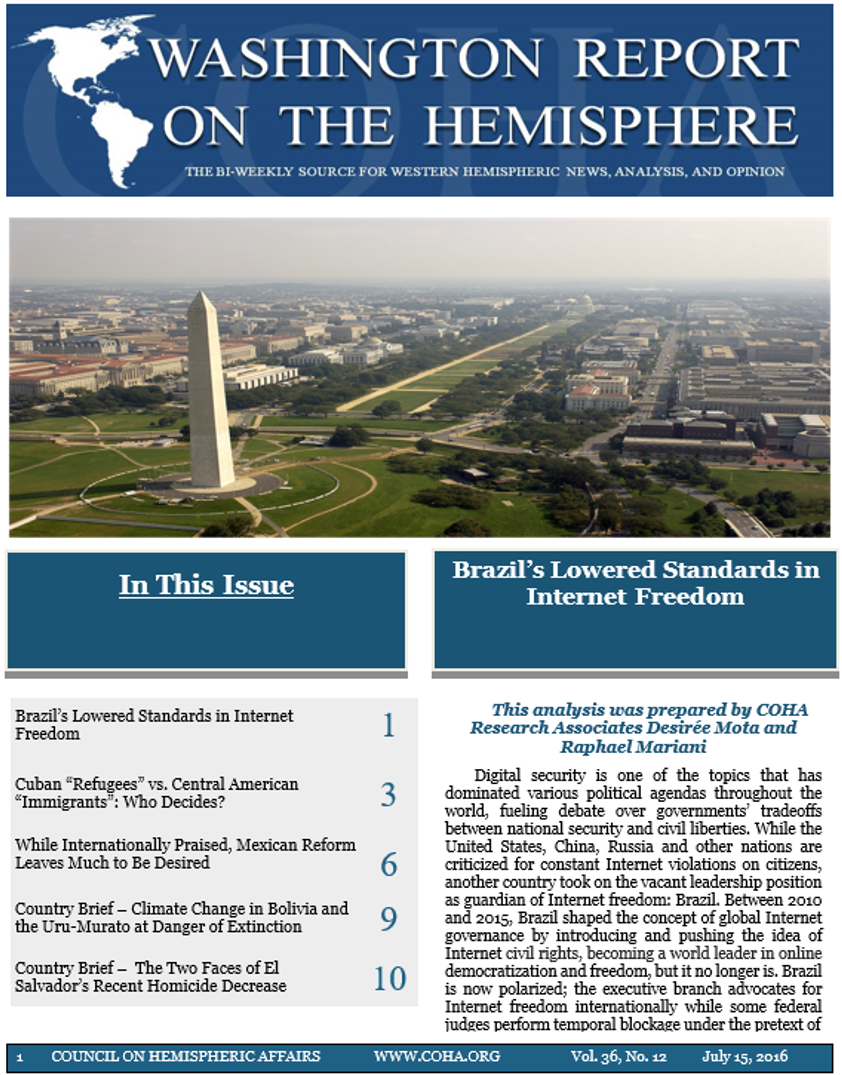 Refugee policy in the United States shifts according to foreign policy objectives and uses language as its facilitator, thereby exacerbating the immigration issue and denying asylum to millions of Latin American migrants. The Council on Hemispheric Affairs (COHA) is alarmed by the situation, given its mission to “encourage the formulation of rational and constructive U.S. policies towards Latin America.” Thus far, the policies in place have not reflected this goal. This trend has been apparent since the Reagan era, and continues in the Obama administration’s recent attempts at policy change. Some media sources and other organizations have touched on the hypocrisy of Cuban versus Central American refugee policy; however, it is imperative to recognize how U.S. immigration policy reduces the two groups to a binary classification of either “refugee” or “immigrant.” This categorization reflects historical U.S. foreign policy and is implicitly responsible for the rejection of would-be refugees from U.S. borders.

3 – “While Internationally Praised, Mexican Reform Leaves Much to be Desired” By COHA Research Associate Fabrizio Chollet

The international community has acclaimed Enrique Peña Nieto, president of Mexico and member of the Institutional Revolutionary Party (PRI), for his accomplishments as head of state. In 2014, Peña Nieto appeared on the front page of Time magazine, and the accompanying article dubbed him and his advisors, “The Committee to Save Mexico,” due to the implementation of new reforms, such as the lauded Reforma Energetica (Energy Reform) of 2013. Time journalist Michael Crowley, who also credited Peña Nieto for Mexico’s recent economic success, has commended Peña Nieto’s reforms as the “most ambitious reforms in memory.”

The devastating effects of worldwide climate change have had a particularly strong impact in Bolivia. It was reported in May 2016 that Lake Poopó in Llapallapani, the second largest in the country, has dried up completely. A series of El Niño droughts since 1985 resulted in the lack of rainfall that would have normally replenished the lake. According to NASA Earth Observatory, the original size of the lake was about 3700km, but a photo taken by the organization in January 2016 demonstrates that the lake has disappeared, save for a few remaining marshy areas. The lake was the home of the Uru-Murato, the oldest indigenous community in the region. Fishing at Lake Poopó was virtually the only means of living for the Uru-Murato people as well as an essential part of their identity. According to an interview by The New York Times, they consider the lake to be “[their] father and [their] mother,” and feel immense grief at its loss.

With just over 100 homicides per 100,000 inhabitants in 2015, El Salvador became the deadliest country in the world outside of a war zone. Throughout the past year, there have been monthly reports of homicide rates exceeding 400 per 100,000, and even August’s homicide rate broke the record with more than 900, becoming the country’s deadliest month since the civil war ended in 1992. Salvadoran authorities have stated that most of the casualties have been gang members killed by rival gangs on the streets, in prison, or in confrontations with security forces. However, in recent months, media outlets have reported that murder rates have dropped dramatically. In fact, the homicide rate dropped from 611 deaths in March, to 353 in April, to 351 in May, and to 331 in June. This last figure is just over half of the number recorded in June 2015, which was 677.