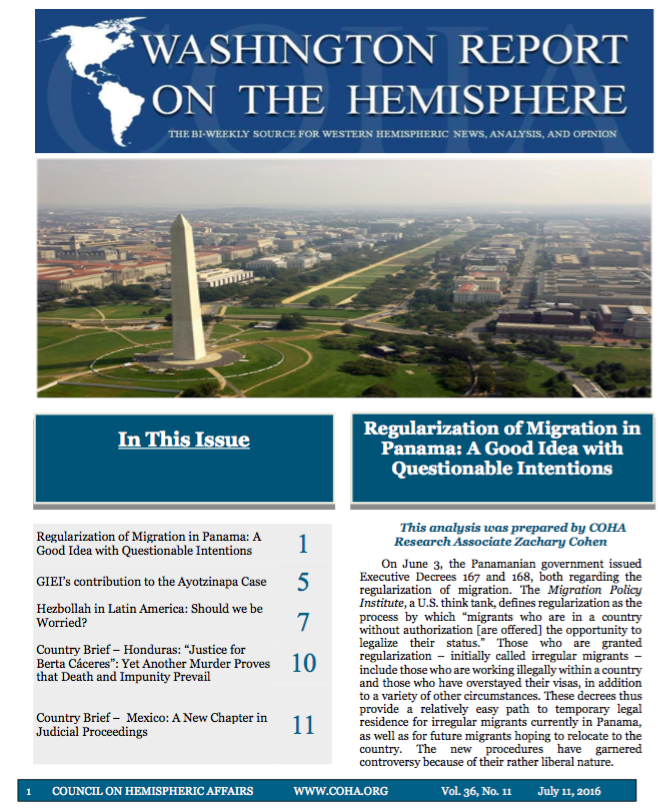 On June 3, the Panamanian government issued Executive Decrees 167 and 168, both regarding the regularization of migration. The Migration Policy Institute, a U.S. think tank, defines regularization as the process by which “migrants who are in a country without authorization [are offered] the opportunity to legalize their status.” Those who are granted regularization – initially called irregular migrants – include those who are working illegally within a country and those who have overstayed their visas, in addition to a variety of other circumstances. These decrees thus provide a relatively easy path to temporary legal residence for irregular migrants currently in Panama, as well as for future migrants hoping to relocate to the country. The new procedures have garnered controversy because of their rather liberal nature.

3 – “Hezbollah in Latin America: Should we Worried?” by COHA Research Associate Julian Palmer

1 – Honduras – “”Justice for  Berta Cáceres”: Yet Another Murder Proves that Death and Impunity Prevail” by COHA Research Associate Emma Tyrou

Four months after the heinous assassination of renowned Indigenous and environmental activist Berta Cáceres, impunity still prevails in Honduras. On July 6, yet another member of the Civic Council of Popular and Indigenous Organizations (COPINH, the organization Berta co-founded 23 years ago to defend indigenous and environmental rights) was murdered. Lesbia Yaneth Urquía had joined COPINH after the coup against the democratically elected President, Manuel Zelaya in 2009, and was a prominent figure in the fight against the hydroelectric dam Aurora I, in the municipality of San José, La Paz. The sham investigation carried out internally has so far spared the intellectual authorship behind Cáceres’ death. A similar scenario can be expected regarding the most recent crime, as the government remains deaf to the numerous calls for the investigation to be carried out by an independent group of experts. However, the wave of indignation spurred after the crimes has intensified international concern about the massive violations of human rights in Honduras and spurred calls for an end to U.S. military funding of the Hernandez administration.

June 2016 marks the deadline for the official and complete implementation of Mexico’s new judicial system aimed at improving judicial transparency and integrity. This transformation has been in the works since 2008 when Mexico’s congress approved a constitutional amendment that mandated judicial reform. The 2008 amendment emerged after a long push for a more trustworthy judicial system. This push toward a new judicial system began in the 1990s during a democratic movement sparked by the removal of the Institutional Revolutionary Party (PRI) party from power. Prior to being ousted in 2000, the PRI essentially single-handedly ruled Mexico and prevented meaningful change to Mexico’s institutions. The PRI’s removal from power in 2000 renewed Mexico’s move toward true democracy, and the 2008 judicial reform amendment marks a powerful extension of this movement.
To order this issue: