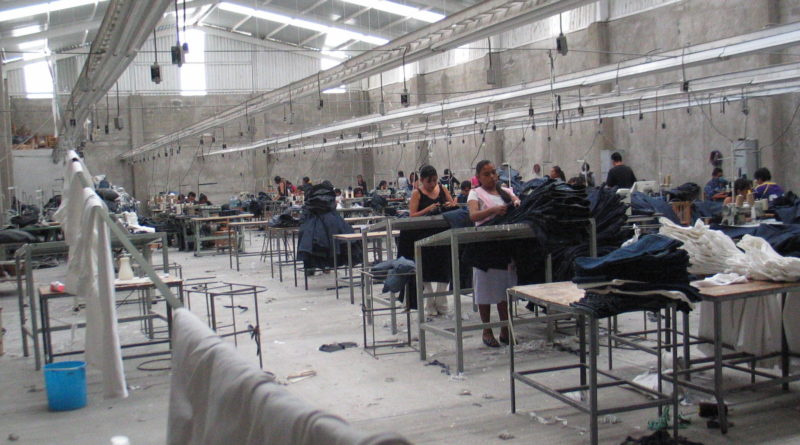 During the day, as merengue blares from a massive speaker and fans whir at full power to counter the stifling heat, Aracelis sits at a sewing machine, reflecting on her previous life. At age 15, she began working in a garment factory in a Free Trade Zone (FTZ) in the Dominican Republic, toiling long hours, almost always without pay. She worked in fear of sexual and verbal harassment from her supervisor. For years, she earned a meager $50 a week and struggled to afford food, medical care, and her children’s education fees. Today, however, due to mounting pressure from advocacy groups on the Dominican government and corporations, Aracelis is paid a living wage and will be able to send her four children to college.[i] Despite these successes, thousands of other individuals across the Western Hemisphere who work in FTZs face similar labor rights abuses.

Also called foreign trade zones or export processing zones (EPZs), FTZs are “special commercial and industrial area…where foreign and domestic merchandise may be brought in without being subject to payment of customs duties.”[ii] Social protection for labor is ensured by both national and international legislation in Latin America; nonetheless, economic globalization inhibits worker rights across the region, particularly for vulnerable populations such as women, who are employed in FTZs.[iii] The International Labor Organization (ILO) estimates that there are approximately 500 FTZs in Mexico, Central America, South America, and the Caribbean, employing over 6 million workers. Women constitute 70 percent, and in some cases 90 percent, of workers in FTZs, and often perform labor-intensive tasks in sub-standard work conditions.[iv] While economic globalization and free trade enterprises themselves are not to blame for such abuses, there is an urgent need for governments, multi-national corporations, and international institutions to guarantee to hold one another accountable for the gross violations of worker rights occurring.

FTZs: The Good, The Bad, and The Ugly

In FTZs, raw materials can be stored, sold, assembled, or packaged prior to re-export or entry into the national customs authorities. Within FTZs, international goods can be traded without barriers such as quotas and tariffs, exempting multinational corporations (MNCs) from duties. It has become commonplace for the governments of closed economies to experiment with open commerce by liberalizing special zones within their borders in order to attract foreign investment. In recent decades, liberalizing measures such as deregulation, the reduction of public spending, privatization, and the loosening of labor regulations have made a considerable impact on Latin American workers like Aracelis.[v]

At first glance, it appears that FTZs are beneficial for all parties involved. Individuals are offered jobs in factories where there were few prior employment options. Companies set up more production units, and the governments of developing countries reap the benefits of decreased taxes.[vi] However, despite their purported successes in stimulating local economies and encouraging less inhibited regional trade, they have granted multinational corporations unprecedented economic liberty and the ability to exploit not only markets but the individuals embedded within them. Consequently, a system in which labor rights abuses are tolerated and conveniently overlooked is perpetuated.[vii]

Transnational corporations and governments repeatedly argue that FTZs are economically beneficial for both countries and their citizens. These zones, however, are known to encourage corruption and allow for the relaxation of environmental and labor regulations, including prohibition and discouragement of labor organizing.[viii] Nonprofit organizations have accused some of the corporations that flock to FTZs of participating in a “race to the bottom” in terms of labor rights standards.[ix]  ILO conventions related to freedom of association and gender equality, including the 1948 Freedom of Association and Protection of the Right to Organize Convention and the 1951 Equal Remuneration Convention, require workers’ gender equality and protect their right to peacefully assemble. Despite these international protections, workers, particularly those in FTZs, face a number of limitations on unionization, collective bargaining, and the right to strike.

The Feminization of Employment

Some of the oldest Free Trade Zones (FTZs) are found in the Americas, but in the initial decades of the 20th century, FTZs became prominent features of the Latin American economic landscape, producing clothing, shoes, and toys in mass quantities. In Uruguay and Argentina, free trade regulations were endorsed around 1920, but during the 1950s and 1960s, there was a rapid surge in their development.[x] U.S.-based companies continue to be a major source of investment in FTZs throughout Latin America, and the United States is a major destination for goods produced.

The last few decades have seen the feminization of employment, and millions of women were incorporated into the workforce during the last third of the 20th century. This process was accelerated with globalization, and by 2008, some 1.2 billion (40%) of the world’s 3 billion workers were women. Women also make up the majority of the world’s working poor, a phenomenon that can be observed in FTZ factories.[xi]  Moreover, indigenous people and people of color are employed disproportionately in factories. Latin America is no anomaly, and labor rights abuses in FTZs are overlooked, particularly for women, as seen in case studies of Honduran and Mexican textile plants.

In Honduras, against a volatile political and economic backdrop, workers face a handful of challenges. Workplace violations involving health and safety standards are routinely overlooked. The Metropolitan University of Mexico found that 46 percent of Honduran textile workers, a predominately female sector, suffered from depression and that 62 have muscle disorders from repetitive motions and inadequate ergonomic accommodations.[xii]

In April 2017, hooded figures attacked union leader Moisés Sánchez and his brother Misael, who advocated for improved worker treatment of those working in the melon industry as the motivation for the incidents. Female workers make up 80 percent of this industry and suffer exposure to chemical products, illegal firings, and unpaid overtime work.[xiii] The Honduran government has done little to address poor working conditions or the violent crackdown on union activity. Multinational corporations exercise control over labor practices in Honduran FTZs, disproportionately harming women.[xiv]

Genesis Apparel, an FTZ factory located in the Zip Tex Industrial Park in Choloma, Cortes, has committed worker rights abuses consistent with widespread trends in the region. Unfortunately, the experiences of workers at Genesis are consistent with the experiences of many female workers in environments with lax labor regulations. Genesis, which employs over 1,800 workers, was found to violate a variety of standards. A worker stated, “The air conditioning system doesn’t cool the building. People are always sweating and I have seen at least six workers faint from the heat.”[xv] Workers frequently spend Fridays and Saturdays in factories, laboring 11 hours with 30 minutes of break time. According to the Honduran Labor Code, the standard work day should be 8 hours. The Labor Code, as well as ILO Recommendation 95, state that pregnant workers must not be assigned duties that endanger their health or the health of their children. Genesis has failed to meet this standard, instead creating a work environment characterized by poor air quality and unhygienic facilities, which further endanger all workers, but particularly pregnant women.[xvi]

A quintessential example of FTZs and labor rights abuses in factories is that of Mexican maquiladoras, foreign-run companies that export products abroad. U.S. corporations own 90 percent of Mexican maquiladoras. Many such maquiladoras are located in export processing zones, and they employ over 500,000 workers, over half of whom are women.[xvii] Prospective female employees were found to face invasive questions and mandatory urine sampling to screen out pregnant women, placing them at a disadvantage for hire. When hired, like Aracelis, women workers experience challenges including sexual assault, forced pregnancy tests, and unlawful dismissals when found to be pregnant. This violates Mexican federal law as well as international law related to gender equality and fair treatment in the workplace. [xviii]

As in many nations, in Mexico, workers face arbitrary dismissals and verbal abuse from superiors in the workplace. In December 2016, nine workers were fired from Lexmark factory on the grounds of “workplace disruption.” They were attempting to form an independent union and advocate for fairer wages. Blanca Estella Moya, one of the fired workers, made 112 pesos, or about six U.S. dollars, a day. She developed tendonitis from the repetitive movements of assembling metal parts for printer production. Her supervisor, “The Dog,” was given his nickname due to a record of sexual harassment.[xix] Across FTZs in Mexico, supervisors in maquiladoras have been found to condition overtime pay to women for sexual favors. [xx]

Despite the myriad challenges faced by factory workers, there have recently been advances in worker rights across Latin America that serve as models of effective administration of labor legislation. In the past decade, progressive Latin American governments such as Ecuador, Uruguay, Bolivia, and Brazil have increased and successfully enforced labor protections for workers.

Ecuador took an important step in 2016 with the approval of a union and government-backed labor reform law that includes provisions to protect women and other vulnerable groups. The law holds employers financially accountable for the illegal firing of workers and mandates the creation of the National Council for Work and Salaries, a consultative body focusing on wage policies. The same year, the International Trade Union Federation gave Uruguay a 1 on its scale from 1 to 5, indicating favorable conditions for worker treatment. The right to unionize is enshrined in the nation’s constitution and labor legislation includes provisions on child labor, protections for women, workday length, and minimum wage.[xxi]

Prudent labor policy is essential in tackling economic inequality, perhaps the most intractable problem. Bolivia has realized an increase of 104 percent in the real minimum wage since 2006, according to the ILO. These improvements, when coupled with measures to encourage gender equality and women’s empowerment in the workplace, strengthen not only Bolivia’s economy but its society as a whole. Moreover, labor legislation regarding retirement benefits, pensions, and paid leave has been pushed, strengthening the narrative that labor rights abuses will no longer be overlooked or tolerated.[xxii]

Governments must encourage better labor practices into their operations in FTZs to respect the dignity of workers like Aracelis. Although FTZs vary in terms of compliance with worker rights standards, a more robust, comprehensive system of third party monitoring and enforcement of such standards are sorely needed. Additionally, nations must adamantly condemn the mistreatment of FTZ workers and continue to support fair wages, freedom of assembly, and gender equity legislation in the interest of Latin American workers. More governments would be wise to adopt progressive pieces of legislation in pursuit of these goals. To complement national legislation, the inclusion of labor provisions in both national legislation and international trade agreements is vital. Current language in trade agreements does not wholly comply with ILO conventions and best serves the interest of large corporations; therefore, further incentives for labor protection must be included within trade agreements in order to both allow for increased market access for Latin American goods and enforce worker rights.

Back in the factory in the Dominican Republic, Aracelis feels the pulse of merengue as the sewing machine runs uniform trails of stitching down the rough patch of fabric in front of her. Though she vividly recalls a time when she was unfairly treated in the workplace, now, thanks to a coordinated effort to respect worker dignity, at the end of the day, she will return home with fair wages in her pocket and a smile on her face to greet her children.

[xii] “Textile workers in Honduras organize to defend their rights together.” UN Women | Americas and the Caribbean. Accessed June 05, 2017. http://lac.unwomen.org/en/noticias-y-eventos/articulos/2017/03/trabajadoras-textiles-de-honduras.