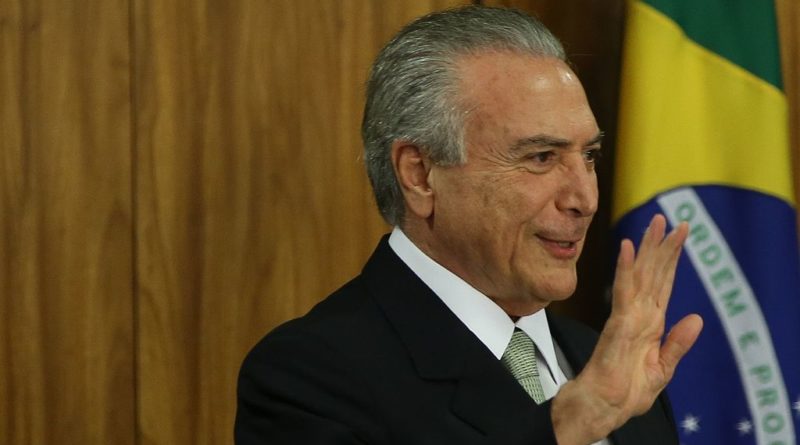 On May 13, groundbreaking news was released about interim president of Brazil Michel Temer. WikiLeaks, the website both praised and infamous for its disclosing of secretive government documents worldwide, announced that interim president Temer was a former embassy informant for U.S. intelligence.[1] Although Wikileaks technically revealed this information four years ago in the form of documents, the intel had remained widely ignored due to interim president Temer’s relative lack of public attention as vice-president.[2] Now that Mr. Temer has ascended to an interim position in the Brazilian presidency following the soft coup of Ms. Dilma Rousseff, the situation has changed.

On May 12, elected President Dilma Rousseff was removed from office to stand in a lengthy and controversial impeachment trial.[3] The general reason for the trial has been a dishonest attempt to link President Rousseff to the massive Petrobras scandal, a political incident spanning across all of Brazilian government and affecting some of the most important people in the political process.[4] Ms. Rousseff was charged with alleged administrative misconduct, disregarding the federal budget, and accounting certain public bank assets in the federal budget— something that was not illegal, and that the government practiced regularly.[5] Whether or not these accusations are valid, it is shocking to see vice-president Michel Temer and his party, the Brazilian Democratic Movement Party (a former parliamentary ally of Rousseff’s Workers’ Party), take over after Ms. Rousseff’s impeachment, even though Mr. Temer and many members of his cabinet were accused of charges in the scandal.[6] Furthermore, of the 65 members of the impeachment commission, 37 faced charges of corruption or other crimes, according to the Los Angeles Times.[7] Later on, phone conversation recordings proved the fact that elected President Rousseff has been impeached in order to control the corruption investigations.[8] Despite his involvement in the corruption scandal, to which he is—unlike Ms. Rousseff—directly linked, Mr. Temer is still being allowed to act as interim president of Brazil.[9] Thus, such allegations have suggested that Mr. Temer was involved in the plot to oust Ms. Rousseff. President Rousseff’s comments that Mr. Temer is a “traitor” to her administration have also increased the tension surrounding his case.[10][11]

The information provided by WikiLeaks makes this pull of the curtains even more shocking, and highlights the potential involvement of the U.S. government in President Rousseff’s impeachment. Mr. Temer’s connections to the United States strongly imply U.S. involvement in Ms. Rousseff’s overthrow— a tactic similar to past U.S. action in Central and South American countries to impeach left-wing parties. Examples include the coup orchestrated by former Secretary of State Hillary Clinton to oust the elected President of Honduras Mr. Manuel Zelaya, the tentative removal of elected Venezuelan President Hugo Chavez in 2002, the removal of elected President Jean-Bertrand Aristide in Haiti a decade ago, or the actions associated with Operation Condor in the twentieth century— we are not lacking in examples.[12] The United States has a strong interest in helping enact this coup. Elected President Rousseff is a member of the left-leaning Worker’s Party, which has carried out many progressive policies like the nationalization of oil suppliers.[13] The United States government, even when its President claims to be a progressive, has unmistakably pursued an imperialist international policy.[14] The pink-tide countries in Latin America have not been viewed kindly, and attempted coups and so-called “constitutional coups” have often been initiated to rupture governments conflictive to U.S. imperialism in a more “delicate” fashion than those promoted during the Cold War.

Ultimately, it may be possible that elected President Rousseff’s impeachment was not planned by the United States, and that the U.S. has decided to take advantage of it by maneuvering Mr. Temer forward. In any case, eyes must be kept open as we continue to see where Mr. Temer’s policies bring Brazil, and whether they fall in line with U.S. rhetoric.