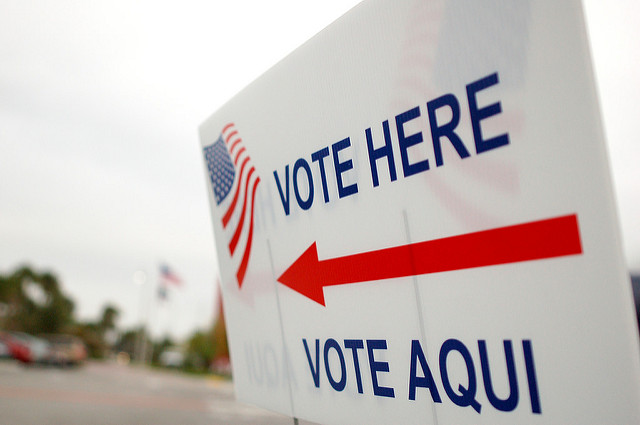 Republican nominee Donald Trump walked away at 3 o’clock in the morning as President-Elect. Secretary of State Hillary Clinton won the popular vote by a slim margin, however she unexpectedly lost the electoral college vote 289 to 218.[i]

Clinton was depending on a heavy Latino voter turnout in Florida and Arizona, which could have sung the election 39 points in her favor and bring the election within a 2-point electoral college margin 259 to 257 with Clinton trailing. She had worked hard to carter to the Latino vote, and that of other minority groups. With Tim Kaine as her Vice-President, she reached out to Latino community Kaine has a very strong, positive reputation among Latinos in his home state. He has lived in various Latin American countries and speaks Spanish. Although he is not Latino himself, he has respected their identity for decades and has always had their best interest at heart.

On the other hand, Trump campaigned aggressively against Latinos. Referring to them as rapists and claiming they bring drugs and crime to our nation, Trump has been an advocate of building a wall to keep them out. The two have very different policies. One of radiates inclusion and protection, while the other promotes xenophobia and racism.

This year, a record number of 27.3 Latinos were registered to vote, up 4 million since 2012.[ii] Many of these registrations were inspired to vote against Trump, rather than for Clinton. Trump’s immigration policy and xenophobic stance really was a driving factor towards this increase in voter registration. Not only were Latinos registering to vote, but many immigrants applied and received their citizenship so they would be able to vote in this election.[iii] Sixty-five percent of the Latino vote supported Clinton compared to the 71 percent that supported President Obama in 2012.[iv] This was enough to swing Nevada blue, but it did not compensate for the success Trump saw in other significant states like Florida and Arizona.

Latinos at – or not at – the polls

Historically, Latinos are members of the democratic party. Pre-election polls confirmed that they were siding with the democrats once again. They play a major role in Florida, Nevada, and Arizona and have the power to influence the final outcome of the election. In fact, early voter turnout in Florida, Georgia, and North Carolina among Latino voters was higher than normal.

Major problems arose throughout this election. Historically, Latinos have strikingly lower representation at polls so although the number of registered Latino voters increased dramatically, it is constantly a battle to actually get them to vote.[v] Even though the early voters looked promising for Clinton, this did not last. She had too little support among Latinos and too little turnout to make her Madame President.

Further, it is extremely difficult to be a voter that does not speak or has a limited understanding of the English language. There are limitations ranging from English-only registration forms, absentee ballots, and polling places. Colorado only has 3 counties that provide voters with bilingual ballots.[vi] One can register to vote in Spanish, but not actually vote in Spanish.[vii] In Wisconsin, there are 20 polling places across that state that can accommodate the Spanish speaking population.[viii] In Florida, organizations such as ProEnglish, does not support bilingual ballots as an option for voters.[ix] This is a major hindrance to Hispanic voters and could make the voter turnout drastically more inclusive if bilingual ballots are available. This community would be less marginalized and more capable to be heard and understood.

Strength in Numbers and Location

Although a minority, Latinos have immense strength and influence in the U.S. presidential elections due to dense populations in key states. Their concerns and policy preferences should seriously be taken into consideration into the policy of both candidates, but especially the winner. A Latino citizen has the same right as any white, Christian, elite, male citizen and should be given the same opportunity to vote. The marginalization of this community is a shame to the United States since Latinos contribute so positively to the culture of our society. Next election, more emphasis should be given to Latino voters by making voting stations accessible to the Spanish-Speaking population.