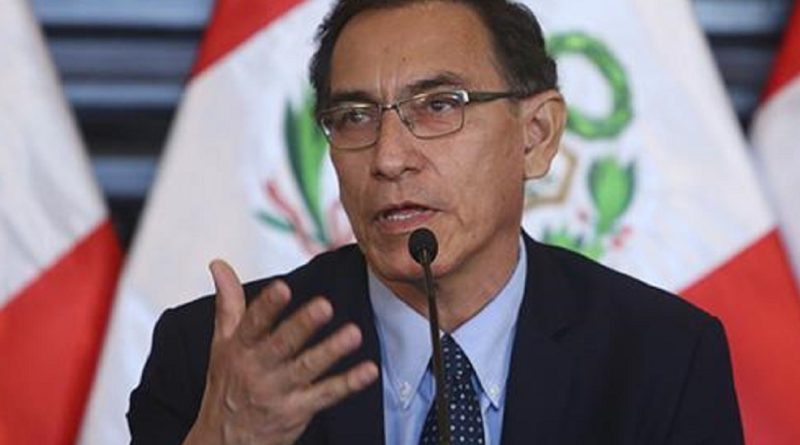 The legacy of one of Peru’s cruelest presidents, Alberto Fujimori, has continued to afflict the political careers of succeeding Peruvian presidents and even his own children: Keiko and Kenji. Although it is naive to assert that Fujimori’s legacy and downfall have directly contributed to the environment of malfeasance in Peru’s legislature and executive office, his actions exacerbate the corruption nightmare that has plagued the Peruvian people for too long.

On March 21, 2018, former Peruvian president Pedro Pablo Kuczynski (PPK) resigned from office, just four months shy of his two-year anniversary as president. With the current Peruvian constitution imposing five-year term limits for its presidents, PPK is the first Peruvian president in the 21st century to fall short of that five-year benchmark. Even so, all elected Peruvian presidents since Alberto Fujimori have been investigated for corruption, with many being indicted. [i] What are the implications of this corruption streak? During the 1992 auto-coup Fujimori dissolved the former bicameral congress, and then in his subsequent rule, he replaced it with a unicameral Congress. Excluding former president Alan Garcia (2006-2011), each president since 1990 — Fujimori (1990-2000), Alejandro Toledo (2001-2006), and Ollanta Humala (2011-2016) — has been convicted, jailed, or forced to resign mostly because of corruption scandals. Be that as it may, five years before his second presidential term, Garcia narrowly escaped conviction for money laundering, solely due to the statute of limitations running out. [ii] In March of 2018, Peruvians saw what has become a tragic recurring theme in the highest levels of their government, corrupt practices and vying for power.

In the last few months of his presidency, PPK was caught in a whirlwind of corruption allegations and obstructions from a Congress that consisted mostly of his opposition. Kuczynski found himself in the persisting headlines of a scandal involving Odebrecht — a Brazilian firm —, which has precipitated the crisis of Latin American corruption scandals in previous years.

In December 2017, spearheaded by two major Peruvian political parties — right-wing Fuerza Popular [Popular Force] and left-wing Frente Amplio [Broad Front]—, the Peruvian Congress sought to impeach Kuczynski for accepting, as BBC stated, “illegal payments” from Odebrecht. [iii] According to the congregistas in question, his company — Westfield Capital Ltd — had received suspicious “advisory fees” from Odebrecht. [iv] While Kuczynski may not have guided any of those illicit interactions, at the very least he had a conflict of interest in this arrangement, which resulted in threats of impeachment from Peruvian congressman. The impeachment proposal only needed 87 members out of 130 voting in its favor to pass. With support from both Popular Force and Broad Front, which would have led to 93 votes between the two, PPK’s impeachment was a very real possibility. The grave reality that the impeachment could pass through Peru’s Congress prompted PPK to seek out a last-ditch deal with the devil to save his political career.

Even though Kenji Fujimori was a prominent figure in Popular Force, a rival party to Kuczynski’s Peruanos Por el Kambio [Peruvians for Change], Kuczynski made a bargain with Kenji. Kenji’s bloc would vote against the impeachment, and in return, Kuczynski would pardon Alberto Fujimori for corruption and major human rights violations. Upholding his end of the bargain, Kenji, with a handful of stalwart members from Congress, splintered off from the Popular Force in an errant fashion, subsequently voting against the impeachment of Kuczynski. [v]

Narrowly surviving December’s impeachment proceedings, PPK’s presidency finally met its demise in March when he reluctantly resigned in the face of renewed congressional impeachment threats. These threats occurred after fresh accusations of wrongdoing and a video of Kenji Fujimori trying to bribe a legislator to vote against the December impeachment. Peruvian media outlets coined this clandestine interaction Kenjivideos or Fujivideos. In the Kenjivideos, possibly taking a page out of the sunk-cost fallacy, Kenji put the nail in his coffin when he exhorted to a legislator: “¿Qué es lo que tú quieres: ¿obras para tu región, desarrollo, progreso?” (What is it that you want: projects for your region, development, progress?). [vi] The Japanese-Peruvian fire drill tactic could not save PPK’s presidential career this time. With Kenji’s resignation from the Popular Force and the negative publicity surrounding the Kenjivideos, PPK seemed to understand that he was backed into a corner; and with that, he formally resigned. [vii]

Sinking their Claws into Peruvian Politics: The Fujimori Family

The Fujimori family has been at the center of the Kuczynski corruption scandals. Keiko and Kenji Fujimori have either directly participated in or indirectly contributed to the environment of the uncovered corruption that encircled Kuczynski’s last four months of presidency. The siblings were both prominent figures in Popular Force (with Keiko as its leader since 2011), until Kenji’s resignation in March 2018 due to a rift with his sister vis-à-vis contentions over their father’s fate, among some policy differences. Popular Force has dominated the Peruvian legislature, acting as a seemingly unmovable force to other political parties. While he was in office, Kuczynski’s Peruvians for Change proved a formidable opponent to Keiko’s  Popular Force. However, following Kuczynski’s resignation, and with the president Martín Vizcarra unaffiliated with any political party, Keiko and her Popular Force have consolidated power. Keiko’s motivations extend beyond simple ideological differences. Her Game of Thrones approach is evidence of her aspiration to a higher office, and in that aspiration remains secrets that Keiko would prefer to hide from the public eye.

The corruption allegations against Keiko are abundant, and consist of: suspect revenue flows intended to fund her presidential campaign in 2011, a swift rise to a powerful congressional position despite her lack of experience in public administration, and peppering her political team with individuals formerly or later convicted of corruption. [viii] In February 2018, Jorge Barata, an ex-representative of Odebrecht, disclosed key information from illicit meetings between Odebrecht and multiple high-level Peruvian officials, including Toledo, Garcia, Humala, PPK, and… Keiko Fujimori. [ix] According to Barata, each of these five high-ranking officials received illegal campaign finances from Odebrecht. If the accusations against the former presidents are considered credible, then who is not to say that Keiko is indeed culpable of this campaign finance? While Keiko has managed to escape indictment and jail time so far, her political career is rife with controversy and loyalties to shady characters. In light of her career and allegiances, is it a reach to presume that she is everything that Kuczynski and Kenji claim her to be?

Conflict within the powerful political clan has contributed to the degradation of honest, transparent governance in Peru. Pedro Pablo Kuczynski played an integral role in this degradation; as this miscreant was no puppet on a string for the Fujimoris. He proved his autonomous decision-making in the Fujivideos and with the questionable history between Westfield Capital and Odebrecht. At the very least, Kuczynski is guilty of a conflict of interest concerning the advisory fees that Odebrecht paid to Westfield, but he is likely guilty of even more. Nonetheless, the Fujimori family has muddied their hands in corruption scandals, some of which have involved Kuczynski. Although this is not solely a Fujimori family issue, they have apparent ties to the corruption epidemic. With little room for ambiguities, Kenji has done much to justify his recent suspension from Congress in the eyes of many congresistas. Also, in the words of Peruvian journalist Enrique Castillo, Kenji faces an uphill battle with winning the favor of the Peruvian people due to the Kenjivideos, a lack of support from his own political party, and a series of unwise political decisions that have marred his reputation thus far. [x]

As of June 6, 2018, the Peruvian legislature has suspended Kenji Fujimori from his congressional seat. In the proclamation of his defense, Kenji stated: “We have been victims of a parliamentary dictatorship. We have been victims of Fuerza Popular’s overwhelming majority.” [xi] There is some verisimilitude in Kenji’s address to Congress, considering that Popular Force holds an unwavering majority. Nonetheless, video evidence is ample proof to suspend, and even eject, Kenji from Congress, unless the video was edited as Kuczynski declared on national television. [xii] Even if Kuczynski ’s accusations are true, after more than ten years of dealing with unscrupulous government leaders, the Peruvian people are exhausted and preconditioned to believe accusations of corruption. Recalling the inherent limitations of a unicameral legislature, as shown from the Popular Force’s virtual domination of the legislature, there is some credibility to the claims of Kenji, Kuczynski, and their sympathizers. If Keiko had assumed the presidential office instead of PPK, Popular Force would have complete hegemony over the executive and legislative office, leaving little room for effective protest and no checks and balances at all.

After such a turbulent year in Peruvian politics, President Martín Vizcarra must assert his policy goals and demonstrate a high moral capacity so that he can bolster the democratic institutions of the Peruvian presidential office. Vizcarra does not fit the archetype of former presidents; he is an engineer and former governor from the Moquegua region, and never aspired to hold this office. While serving as Ambassador to Canada, Vizcarra even went as far as to say that “his [former] role as first vice president was ‘more about protocol than about executive action.’” [xiii] In addition to his maverick outlook on elitist politics, Vizcarra is currently serving as president without any party affiliation. This peculiarity has three possible outcomes: either Vizcarra’s reluctance to affiliate himself with a party will overcome the looming Popular Force and Keiko; the Popular Force will bully Vizcarra into submitting to the will of their party and policies; or, more likely, Vizcarra will merely encounter roadblock after roadblock in Congress, such as in the case of PPK.

Kenji’s suspension from Congress makes him unlikely to be meddlesome in the new presidency; however, that will be subject to change in the future. According to Peruvian analyst Fernando Tuesta, “The drive to ban Fujimori from politics was in fact aimed at keeping him out of that presidential race.”  [xiv] It is possible that Kenji’s resignation from the Popular Force in March was caused by his intention to run against Keiko in the upcoming 2021 presidential election. Taking into account Kenji’s history of political tricks, he could try to finagle the 2021 presidency, either directly or indirectly, through Vizcarra.

Vizcarra presents an opportunity for the Peruvian government to atone for the sins of some of its former members, and potentially promote a more capable, honest, and transparent government. Vizcarra’s presidency is perhaps the final chance for Keiko to save face for having obstructed government, engaging in reportedly illegal activities, and simply having family connections to suspect characters. Fujimori involvement in politics was make or break for Kuczynski being that Keiko controlled the dominant political party and Kenji was playing political games. Likewise, for Vizcarra, the Fujimoris are likely to influence the direction of Vizcarra’s presidency.  If Keiko can put her petty politics aside and stand behind Vizcarra to promote effective government, then his presidency is all the more likely to succeed. It seems likely, however, that the ouster of her opposition — i.e., Kuczynski and Kenji —, and the subsequent consolidation of her party’s power in the legislature was for a specific political end. That is to say, this end consists of Keiko increasing her odds of winning the 2021 presidency and shielding herself from any future efforts from the Peruvian Congress to impeach her on account of corruption. Keiko is running a house of cards, and if she continues, then not only will she fall but also the democratic institutions of the Peruvian government. The future of more honest democratic governance in Peru, unfortunately, rests a great deal on the relationship and actions of Keiko, Vizcarra, and potentially Kenji.