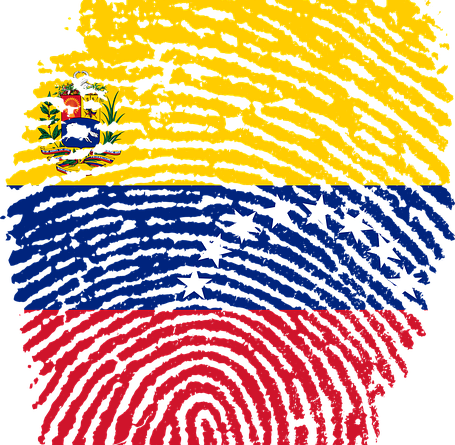 The current political and economic turmoil in Venezuela has prompted those who oppose the government to pursue a recall referendum process. A recall referendum is the use of a popular vote to remove a public official before the end of his or her term.[i] The process typically requires an initial petition demonstrating popular demand followed by a vote to determine whether the functionary will continue in office. In Venezuela, the ongoing recall efforts are directed at sitting President Nicólas Maduro.

In recent months, the recall supporters’ largest complaint has been the timeline established by the National Electoral Council (CNE). On May 2, the opposition party, Mesa de la Unidad Democrática (United Democratic Roundtable – MUD), submitted over 2 million names to the CNE as part of their application to initiate the formal process. Early this August, after a difficult validation effort in which many signatures could not be authenticated, the CNE announced that it had confirmed enough names[1] to proceed to the next step: a second petition, which must be signed by 20 percent of registered voters. [ii] [iii] On September 1, hundreds of thousands of Venezuelans took to the streets of Caracas to protest the decision to schedule this petition in late October.[iv] At the current pace, should the petition pass, the recall referendum itself would not take place until next year, at which point it would be too late to hold new elections, ensuring a Chavista presidency through 2018.

While frustrating for the opposition, COHA’s Erika Sato has pointed out that the CNE has the right, and even the responsibility, to set a timeline that ensures a fairly contested and well-administrated referendum.[v] Of larger concern should be potential violations of Article 72 of the 1999 Constitution, which clearly lays out the conditions necessary for a recall. It is vital that the Maduro administration, opposition, and CNE abide by these rules over the coming months. First, the CNE should faithfully interpret “20 percent” as the proportion of all national voters. Second, the opposition must accept defeat should they carry the majority at the referendum but fail to win more votes than Maduro won in 2013.

Recalls in Venezuela and Around the World

Five Western Hemisphere countries have provisions for recall elections at the local and state levels. In Argentina, Cuba, and Peru, citizens can initiate and approve a recall process to remove local and municipal officials, while in Colombia and in 18 U.S. states, governors are also fair game. Only 11 countries in the world have full recall elections—ones that are both initiated and voted on popularly—for national positions and in just two can such processes be used to remove the chief executive: Ecuador and Venezuela.[vi]

The ability to recall all elected officials is a core principle of Venezuela’s democracy. Examples of the recall process in practice include the 2004 failed referendum against Hugo Chavez and 10 recalls against municipal officials in 2007. [vii] The removal process is outlined in Article 72 of the 1999 Constitution, which begins, “All popularly elected positions are revocable.”[viii] The article goes on to specify four necessary conditions for a recall.  Following sections analyze each condition with respect to current proceedings.

Half of the official’s term must have transpired[ix]

To respect the rights of the original voters, public officials can only be removed during the second half of their term. Hence the President, who serves a term of six years, can only be recalled after completing three years in office. President Maduro became interim president on March 5, 2013—after the death of Hugo Chavez— then won a special election on April 14, and is serving out Chavez’s term that began on January 10. It is not clear whether Maduro’s halfway point came this past January, March, or April, but either way he is now eligible for recall.

To initiate the recall vote, at least 20 percent of registered voters must petition for the referendum. In light of the tumultuous 2004 presidential recall, in which the opposition collected the signatures itself, the CNE will organize the petition this year.[xi] The collection has been scheduled for three consecutive days at the end of October.[xii] Some details, however, remain undetermined. One is whether the petition must get 20 percent in each state as well as nationally. Under a national interpretation the petition would need 3.9 million signatures. A state-by-state interpretation would raise the bar much higher.

At the recall referendum itself, the opposition must secure at least 7,505,338 votes, the number of ballots that Maduro won in 2013.[xiv] In the 2015 parliamentary elections, 71 percent of Venezuelan’s cast valid votes, a turnout comparable to that of the 2004 presidential recall referendum (69 percent). [xv] [xvi] If participation is similar this time around, the recall campaign would need to get 55 percent of the vote, a target they are on track to hit as recent polls show that two-thirds of Venezuelans are in favor of the recall.[xvii] Meeting this condition, however, could become more difficult if turnout is lower than expected.

Venezuela has about 19 million registered voters. This means at least 4.75 million Venezuelans must participate in the recall referendum. In light of recent election turnouts, this figure is likely to be reached.

The Fight over 20 Percent

The next hurdle for the recall campaign is securing the signatures of 20 percent of registered voters on the October petition. Using the national interpretation, the petition would need around 3.9 million signatures to pass.

Given statements made by two rectors of the CNE, however, there is a chance that a state-by-state requirement will also be applied. For the MUD’s application, the CNE demanded signatures from one percent of voters in each of Venezuela’s 24 states. Rectors Socorro Hernandez and Tania D’Amelio recently suggested that the same rules should govern the 20 percent petition.[xix] On August 27, Vice-President of the CNE, Sandra Oblitas, confirmed that, “whether the 20 percent corresponds to the state or national level is on the discussion table.”[xx] Meanwhile, the MUD’s representative to the CNE, Vicente Bello, completely rejected this possibility stating,  “for a governor [the corresponding district] is the state; a mayor, the municipality; and for the President, the entire country.”[xxi] CNE President Tibisay Lucena has remained silent on the issue.

Venezuela’s 1999 Constitution supports Bello’s interpretation.  First, the use of a state-by-state requirement for the application was permissible because rules for this stage are governed by CNE resolutions[2] and not provided for in the Constitution.[xxii] However, Article 72 unequivocally states that the 20 percent petition pertains to registered voters in the “corresponding district,” which, by the CNE’s 2004 interpretation, would be the entire nation. Even the 2007 CNE resolution, which currently governs all current recalls, reiterates the precise language of “corresponding district” found in the Constitution. [xxiii] [xxiv]

Given the 2015 parliamentary election results, a state-by-state interpretation would make things difficult for the recall petition scheduled for October. For instance, in 2015, just 23 percent of registered voters in the poor coastal state of Delta Amacuro cast valid ballots for the MUD (see table below). The MUD also won votes from less than a third of registered voters in Apure, Portuguesa, Sucre, Amazonas, and Guárico. In these states, compiling signatures against Maduro from 20 percent of registered voters will be no easy task. Already some observers are suggesting that the recall campaign concentrate efforts in such places to prepare for the possibility of a state-by-state requirement.[xxv]

Reviewing the constitutional conditions for a recall, there is a possibility that the opposition could win over 50 percent of the vote in the recall election but not more than the 7.5 million ballots that Maduro received in 2013. This becomes more likely the lower the turnout.

One cause of low turnout could a late referendum. According to Article 223 of the 1999 Constitution, if a President is removed within the last 2 year of his or her term, the Vice-President assumes office until the next election cycle.[xxvi] Removal before then sparks a special election to determine who will serve out the term. Since Maduro’s term ends on January 10, 2019, he must be recalled before that date next year to prompt new elections.[xxvii] If held later, opposition turnout may be low, as even a successful recall would only result in current Vice-President Aristóbulo Istúriz taking office.

Another source of low turnout could be an improved economic and political climate at the time of the referendum. Should the government successfully deal with Venezuela’s current malaise by early next year, the recall effort would lose steam.

If turnout is low but the recall campaign still carries a majority, it is conceivable that both sides would claim victory. Nevertheless, the Constitution clearly maintains that Maduro would stay in office.

The CNE is bound by the Constitution when setting the rules for the recall process. With regards to the presidency, the “corresponding district” is arguably intended to mean the entire nation of Venezuela. It was interpreted thusly in the 2004 referendum and there does not appear to be a sound argument for modifying this precedent. Likewise, should a referendum be held in which the opposition carries a majority but falls short of 7.5 million votes, they must humbly concede defeat. In either case, upholding the rules outlined in the Constitution should take precedence over determining who will govern Venezuela for the next two years. 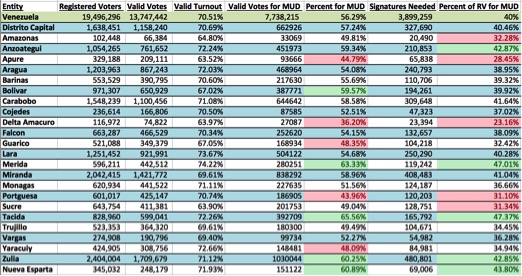 [1] One percent of registered voters in each state.