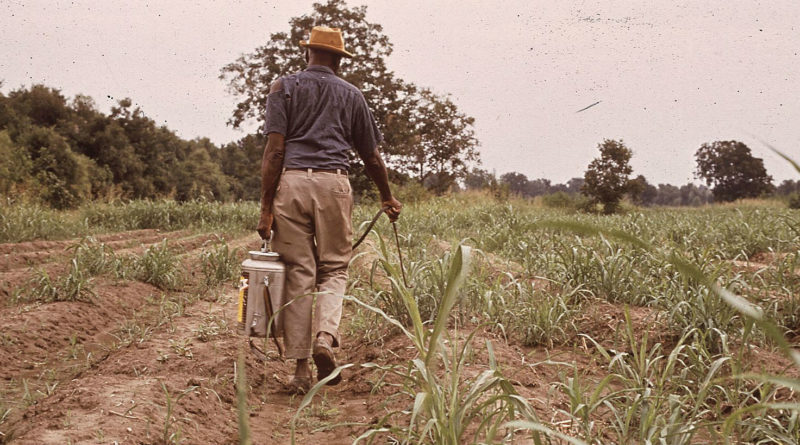 By: Wren Greaney, Research Associate at the Council on Hemispheric Affairs

Failures of past Panamanian governments to effectively regulate farming and to consider the broad, and often deleterious, effects of chemicals being used in agriculture have significantly impaired water quality in rural regions of Panama. Poor management and minimal regulation of pesticides and herbicides can profoundly contribute to water pollution from agricultural runoff. Because Panama’s policies have not effectively addressed the problem of agricultural runoff, the nation is facing public health issues tied to persistent water pollution.

In Panama, toxic pesticides often enter and pollute bodies of water used for drinking, cooking and other domestic tasks. For example, residents of the rural town of Vallecito obtain some of their water from springs that are exposed to “runoff contamination by animal feces, fertilizer and pesticides.” They also use water from private land where the owner “plans to use pesticides in the near future.”[1] These current and hazardous exposures are an example of the pervasive struggles that rural residents face in obtaining clean water where there is not sufficient infrastructure to prevent such contamination.

The historic absence of political support for elevated rural water quality has led to creating financial and land management challenges that have resulted in obstructing infrastructure development. However, the national food industry continues to drive agricultural production without pause to address water quality side effects. Rural agriculture is responsible for 55.2 percent of the organic water pollutants generated by the Panamanian food industry.[2] Thus, the national economy has had a strong hand in creating unintended water conditions that negatively affect rural residents and indigenous communities. Rural water pollution is a result of the country’s national politics and economics as communities struggle to gain access to clean water due to an absence of forceful enough policies capable of funding the implementation of pollution-limiting infrastructure.

This type of water pollution is certainly not isolated to Panama. In fact, the United States faces similar water pollution challenges, even though more data regarding United States pesticide usage is available than for Panama. A 2000 Environmental Protection Agency report concluded that agricultural nonpoint source pollution is the “leading source of water quality impacts on surveyed rivers and lakes…and a major contributor to contamination of…ground water.” Similar to the story of Panama’s pollution situation, the U.S. Environmental Protection Agency says the U.S. water pollution is due to “poorly located or managed animal feeding operations…and improper, excessive, or poorly timed application of pesticides…and fertilizer.” Just as in Panama, farming operations infiltrate public waters in the United States, challenging the health of surrounding communities and lands.

Water pollutants in rural Panama have significant negative health effects. One group of toxic pesticides frequently used in Panama is that of organophosphates.[3] According to a 2009 Newsroom Panama article “organophosphates are associated with respiratory problems, memory disorders, dermatologic conditions, cancer, depression, miscarriages, and birth defects,” which makes these chemicals unsafe to public water supply.[4] Frequent use of this chemical group paired with regular agricultural runoff creates a worrisome link between water pollution and public health in Panama. The chemicals’ health effects demonstrate that chemical water pollution directly threatens human wellbeing. It disproportionately threatens the health of the nation’s rural populations due to the nature of the country’s center of agriculture.

Although a simple solution to the problem could be to limit pesticide use, it is not yet clear how much support President Varela is prepared to extend to rural Panamanians in this way. Pesticides provide benefits that can be difficult to counter politically and economically. The obvious motivation for using pesticides is to reduce insects and other animals that harm crops. Pesticides help to increase profits and, as certain pesticides become popular, more farmers are forced to use them to remain competitive. The trade in these chemicals already is well established and farmers are accustomed to using them, even overusing them. Pesticides are often imported from several East Asian nations where they are produced.[5] The government’s interest in continuing to participate in such trade with these nations may be an incentive for maintaining pesticide imports. As Panama continues to increase its role in global trade with the current expansion of the Panama Canal, it is prioritizing participation in global economics at a very fast pace. This priority is likely to stimulate a steady flow of imports in agricultural pesticides as a way to continue high-speed agriculture.

Panama’s National Environment Authority (ANAM) was created in 1998. It did not avail itself of strongly addressing agricultural runoff, as the department dealt mainly with environmental regulations for actions of large-scale industries and there appeared to be no ANAM regulations specific to water quality in relation to rural agriculture and pesticides. Under former President Martinelli’s government, which had a dismissive attitude regarding environmental health, Law No. 30 of 2010 eliminated a requirement for environmental impact assessments for “government-sponsored development projects,” among other increases in government exemption.[6] In July 2010, the Council on Hemispheric Affairs criticized this exploitive law that was repealed on October 11, 2010 after widespread protest.[7] The restrictive policy carried out by Martinelli’s government extended to environmental harm affecting water quality and residents’ health.

The United States has a distinctly stronger record of mitigating the effects of chemical water pollution with several regulations. The Clean Water Act directs funds to “control nonpoint source pollution from working farms and ranches.” The Department of Agriculture also funds programs to promote farms’ pollution management and to help “local organizations and individuals…create regional support networks” for safe water quality practices. [8] Although established limits can be violated, water quality protection is much more enforceable within such limits. Regulations in the United States establish guidelines and provide funding to limit pesticides in the water supply.

There is some evidence of a shift in the Panamanian government’s attitude in regards to protecting rural water resources, potentially toward a more comprehensive system similar to that of the United States. In February, Panama’s National Assembly created the Ministry of the Environment, with the new president, Juan Varela, signing it into law. The head of the new ministry, Mirei Endara, claimed in March that increasing rural access to clean water was a priority.[9] This claim is an indication that the Varela government will focus more government resources on rural water supplies. Endara’s and President Varela’s actions in coming months regarding water pollution will be revealing of whether this commitment will withstand political and economic detractors within the capitol.

International efforts have worked in favor of creating more environmentally sound practices in Panama. The Environmental Cooperation Agreement was signed by the United States and Panama in 2012 to “protect the environment and promote sustainable development” with regards to trade relations between the two countries.[10] At the very least, this agreement represents acknowledgement of a responsibility to support environmental safety measures. It also led to the joining of representatives from the United States and Panama in the Environmental Cooperation Commission, which met in January 2014 to agree on environmental goals through 2017.[11] The agreement also reinforced ideas of free trade, indicating that the U.S. and Martinelli governments employed a claim of environmental conscience to strengthen economic relationships and specific trade notions. As of now, despite this representative international environmental support, the lack of an explicit water quality system within rural Panama indicates continued risk of pesticides being introduced in the surrounding waters.

Several non-governmental organizations work on water quality and pesticide mismanagement in Panama. The organization Centro del Agua del Trópico Húmedo para America Latina y el Caribe (The Humid Tropics Center for Latin America and the Caribbean) promotes sustainable development such as “technology transfer on water resources,” the Peace Corps works on sustainable agriculture and environmental health, and various local organizations work to raise awareness about environmental issues.[12] This non-governmental support implies a desire on the part of environmentalists and community members to address water supply problems. Because there is not a well-established structure for ensuring water quality, these organizations do not work as supplements, but rather work to piece together what the government lacks in water quality support mechanisms. Future progress in creating higher standards for water quality may come about chiefly from the labors of non-government groups.

Human and environmental health will continue to be at stake unless systems to limit the effects of pesticides in agriculture are achieved. One of the most direct ways to combat the issue would be to limit pesticide use in rural areas. This requires both economic empowerment in order to reduce Panama’s participation in the toxic pesticides trade and provision of infrastructure to divert pollution from water sources. Rural Panamanians may seek such changes from the Varela administration as well as from the new Ministry of the Environment.

By: Wren Greaney, Research Associate at the Council on Hemispheric Affairs