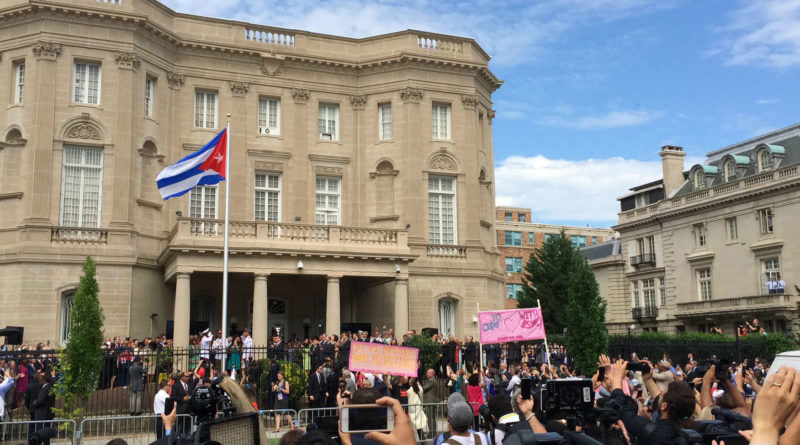 Amidst cheers of “Cuba sí, bloqueo no” (Cuba yes, embargo no), hundreds gathered on Washington, D.C.’s busy 16th Street to bear witness to the symbolic close to one of the more misguided chapters of American foreign policy. Trumpeting fanfare sounded as Cuban honor guard soldiers raised their country’s flag above what is now Cuba’s embassy in the United States.

“It’s a new beginning, it’s a new opportunity for the people of Cuba,” said Karla Ramos, one of the spectators, in an interview with COHA, mirroring the sentiments of many others there to celebrate this momentous occasion 54 years in the making.

Ramos, who is from El Salvador, added that this new relationship between the Cold War rivals is not significant just for the Cuban people, “but also for the people of the United States and for us, the Latin American countries, [so] we all can be one continent united.”

Despite the jubilation of the event, there was still a shadow cast by the remnants of the embargo. Michael Beer, a demonstrator for CodePink, a grassroots organization supporting peace and human rights initiatives, emphasized the remaining roadblocks in an interview with COHA when saying that this event “brings a mixture of happiness, but we need more.”[2]

“We need to rapidly reconcile here,” Beer said. In order for this to come to fruition, Congress must decide to remove the legal labyrinth that still prohibits completely normalized relations. Further impediments include travel restrictions and Guantanamo Bay. “We have to give Guantanamo Bay back to the Cuban people,” Beer opined.

The embassy opening is the most recent step in a series of initiatives lead by President Obama, following his December 17 announcement to reestablish formal ties. In the diplomatic spirit of the day, the U.S. embassy in Cuba opened in Havana shortly after. Secretary of State John Kerry plans to visit the island later this summer to officially inaugurate the new American embassy.[3]

Though there was undeniably an atmosphere of change, not everyone present was supportive of renewed relations with the Castro regime.

Orlando Luis Pardo Lazo, a Cuban writer who left the island, was a protestor advocating for multi-party representative democracy in Cuba.

As the flag rose, Pardo Lazo interrupted a marked silence by yelling out, “¡Cuba sin Castro!” (Cuba without Castro!). His sentiments reflect a diminishing but vocal undertone of opposition to the new foreign policy.

While some champions of normalization stress that the United States can have an impact on Cuban politics, there is much that the United States can learn from Cuba. The country maintains an exceedingly advanced healthcare system and free education and boasts one of the highest literacy rates in the world. Ramos agreed that Americans should focus on “what Cuba has done for Cubans and for the rest of the world.”

Parading several fuchsia parasols with one letter per umbrella, together spelling out “Cuba sí,” CodePink’s demonstrators helped to symbolize a future unity between the two states. Certainly, the opening of the embassy and the reinstatement of diplomatic relations bring Cuba and the United States one step closer.