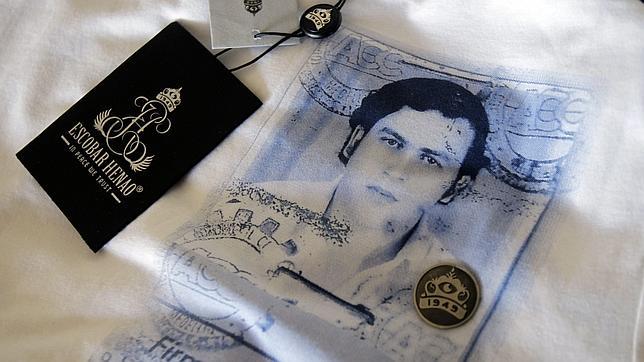 Pablo Escobar gained notoriety throughout the 1980s as the most powerful leader of the Medellin Cartel in Colombia.1 His influence and brutality can be effectively contrasted with today’s infamous Mexican outlaw, Joaquin “El Chapo” Guzman, the leader of the Sinaloa Cartel. The Colombian drug lord’s reign came to a violent end in 1993 when he was shot to death during a police raid.  Today, almost 20 years after his death, Escobar’s son, Juan Pablo (who has now changed his name to Sebastian Marroquin), has launched a clothing line that includes t-shirts with photomontages of his infamous father. The son’s decision to make a profit out of his father’s violent and extravagant life has to be placed in a wider context of how Latin American society remembers the region’s violent period and the drug-generated celebrities of the 1960s to the mid 1990s that soaked the land with their blood. Such a discussion would necessarily have to include an inventory of the iconic characters that illuminated the period and gave it such infamy.

At its most garish moments, clothing lines that immortalize individuals from Latin America’s tawdry epoch (such as the Argentine revolutionary Ernesto “Che” Guevara to the aforementioned Escobar) are one of the ways the region remembers how to celebrate its most notorious figures, and can profit from an unremittingly and profitable past. Other venues, through which the criminal, but glamorous, lives from that period are addressed, include the production of movies and soap operas.  The proper way to remember the period’s operatic past becomes a contemporary issue as new generations of Latin Americans grow up thrilled by these famous names but without having experienced the atrocities that made their ancestors household names. This is all the more reason why a properly balanced education makes this controversial history so necessary and compelling.

Clothes with pictures of iconic Latin American figures have become commonplace today. Perhaps the best-known example invokes the image of Ernesto Guevara, the Argentine revolutionary and a critical figure of the Latin American Cold War era that had his visage stamped on t-shirts and billboards (astride his motorcycle, on his way to some rendezvous with his fellow revolutionaries) for decades. Ironically, while the Argentine folk hero struggled to fight capitalism throughout the hemisphere for years (he spent some time fighting in the Congo as well) capitalist entrepreneurs have been quick to profit from his image and his fiercely anti-capitalist persona. For example, the Che Guevara online Store (www.thechestore.com), has vended dozens of items with Guevara’s haunting face (ranging from t-shirts, headwear, personal bags to even Guevara bobble heads). Furthermore, his life, leading up to the advancement of the revolution, was portrayed in the major 2004 motion picture called Diarios de Motocicleta.2 Guevara also evolved into being a prolific writer as he wrote numerous essays where he explained his ideology. Arguably contributing to his notoriety is the 1998 book Guerrilla Warfare, represents a compilation of some of his major communiqués.3

A more recent example of “violent threads,” is the aforementioned launch, by the son of Pablo Escobar, of a clothing line designed to honor his father, called Poder Poder (Power Power).4 The clothes that are being manufactured today include t-shirts with Escobar’s birth certificate and credit cards, along with photos depicting various stages of his life. One of the t-shirts even has the image of Escobar’s arrest warrant. The clothes are already available for purchase in several countries, including Spain and Guatemala.

It is worth mentioning that the Mexican drug cartels have yet to find occasion to jumpstart any self-promoting clothing lines. On the other hand, it has become increasingly usual for the members of cartels to place their organization’s logos onto different types of clothing and accessories. The El Paso Intelligence Center, which publishes unclassified reports of information recollected from a variety of security agencies such as the DEA and the Department of Homeland Security, published on January 2011 a report entitled, “Language of the Cartels: Narco Terminology, Identifiers, and Clothing Style,” that increasingly addresses the growing popularity and usage of the cartels’ logos.5 For example, regarding the infamous Zetas cartel, the report explains that:

[The] Zetas logo indicated their previous alliance to the Gulf Cartel; however, the Zetas are now currently using the Ferrari logo, as well. These symbols are not only seen on their vehicles, but also on their key chains, and on their clothing, as these logos are being placed on leather jackets and jewelry. In the wing of the “Hecho En Tamaulipas” logo, there will be a “Z” for Zetas.6

How Latin American governments cope with their violent past, while simultaneously teaching new generations about these legacies, is an issue that is sure to grow in importance in the coming years. Whether it is past discussions regarding the ideological war between Washington and Moscow that generates proxy wars across the Western Hemisphere or expanding upon the legacies of a controversial individual like Pablo Escobar (who made a personal fortune and created an aura around himself thanks to his involvement in drug trafficking) the question will be: how will the region remember its recent and characteristically brutal history?  As previously mentioned, the Argentine insurgent leader Che Guevara has become a world icon and has become immortalized on t-shirts as well as wall paintings around the world. His popularity has been cemented on walls at home and abroad, as well as by his numerous public manifestations.7

Therefore another question that must be asked regarding the fate of the Colombian drug lord is whether he will be remembered in a dramatically similar way to how Guevara has been so heroically remembered. Factors that would aid this unwanted development include the Poder Poder clothing line and the controversial initiatives the Colombian drug lord carried out in poor communities in his native region of Antioquia. These projects included the construction of roads, as well as sports facilities, due to their connection with his hometown, in order to promote a positive image of himself while he was alive.

Nevertheless, it is critical to remember that “El Doctor,” as Escobar was also known, became infamous for the violent actions he took against his opponents as well as against innocent bystanders. While he wanted to portray himself to the public as some kind of Colombian Robin Hood or Emiliano Zapata, he instilled a reign of terror throughout the country in the 1980s. The question can be asked: should people really be wearing the clothes that will financially reward his son and immortalize his father, arguably in a positive way?  The crimes resulting from Escobar’s orders have been well documented and are universally known throughout Latin America. For example, the author of this commentary has been interviewed for an upcoming documentary entitled Uncensored, which discusses the violence that Colombian journalists chronically faced throughout the 1980s at the hands of criminal organizations, such as Escobar’s Medellin Cartel.8

However, new generations of Colombians are presently growing up without having suffered the milieu of Escobar-authored terrorist car bombs or reading about the assassination of politicians, police officers and journalists that occurred as a result of his orders. In regards to the generally positive image that the t-shirts have generated in respect to Guevara, it is debatable to what extent the Escobar legacy will be affected in the coming years as this apparel is circulated. Upon announcing the creation of the Escobar clothing line, his son explained that the clothes are “an auto criticism of my father’s history, and an invitation for the youth to be conscious of the dangers of entering the drug and drug trafficking world.”9

As previously mentioned, it is important to highlight that besides the recently introduced clothing lines and movies, there is a new popular way of portraying the narco/criminal life via exciting telenovelas (soap operas). For example, several Colombian novelas deal with the drug life, including “El Capo,” “Las Muñecas de la Mafia” and “Sin Tetas No Hay Paraiso.” Such productions have also come under scrutiny as they humanize – even glamorize – the narco life under a light of glamour that might make the violent organization appealing to young viewers.  Interestingly, the Latin TV station Telemundo has launched a soap opera entitled, “Pablo Escobar: El Patron del Mal” (Pablo Escobar: The Lord of Evil), which portrays the Colombian drug lord’s life.10

While freedom of expression should be supported and protected, it is a tragic development that a systematic murderer and assassin like Escobar has the potential to be immortalized, or remembered in any positive way, considering the loathsome actions he carried out throughout his life.  It is this kind of educational and social dilemma that several regional countries have generated and will likely continue to do so for decades to come.

How the average citizen of Latin America remembers the region’s violent past will become an increasingly important point of examination in the coming years. In regards to clothing lines, carrying the likes of the emblematic garbs of Che Guevara and Pablo Escobar throughout trade shops in the hemisphere, it is debatable to what extent these businesses, besides making a prodigious profit, are also promoting a positive image of the individuals they portray. In Guevara’s case, the combination of the publication of his memoirs, the 2004 biopic, and his camisetas have immortalized him as a positive, yet perhaps overrated, towering figure of the Cold War. According to some Latin American experts, Guevara is an irrelevant, romantic and colorful, if misguided, figure of the Cold War, whose commitment to the revolution has been based on geopolitical farrago and advancing pathological causes via extreme violence. Nevertheless, decades after his death in the Bolivian jungle, he remains a positive symbol for new generations.  It is still too early to tell if a similar development will occur with Pablo Escobar, which makes it even more important for the Colombian government to educate its youth regarding the country’s recent history, including the plethora of bloody deeds carried out by Escobar and his Medellín Cartel.

Despite ongoing elevated levels of violence in Mexico with the drug cartels, the Mara gangs in Central America and narco-terrorism in Peru and Colombia, an optimist could say that, hopefully, the region has managed to slowly turn a page regarding its violent past. Hopefully, we won’t see any more dirty wars, military dictatorships, or massacres, though this may just be wishful thinking. In any case, after having survived a particularly dark chapter of its history, Latin America can today better deal with addressing its often shameful past and how the region’s youth should be educated, including comprehending the significance of wearing a Guevara or Escobar t-shirt in some steamy last-chance hotel.

Mexico’s Drug War: Not Another Colombia