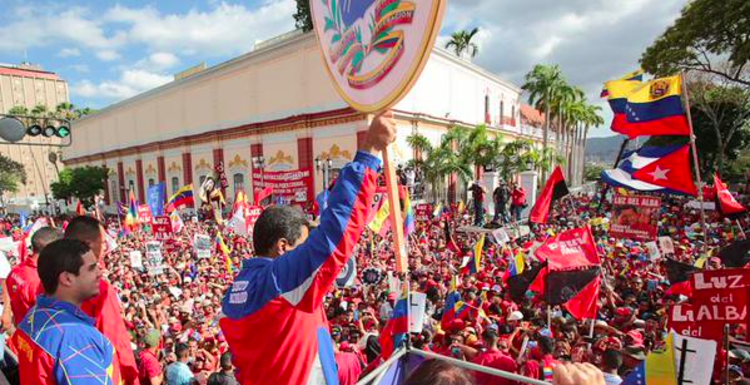 The democratically-elected government of President Nicolás Maduro, nearly two years into a six year-term, has managed to face down a formidable U.S.-backed right wing opposition, elements of which have been relentlessly trying to bring about regime change by any means. Since being elected president in April 2013, Maduro has faced an economic war directed against an already ailing economy, an anti-government media campaign, and four months of guarimbas (improvised violence at the anti-government barricades) during the first quarter of 2014. Most recently, the government has reported and provided mounting evidence of a thwarted coup just last month. So it has certainly been a challenging year for an incoming administration by any reasonable measure.

Despite these political and economic challenges, Chavistas and allied parties managed to pull off a stunning electoral victory in the municipal elections of December 2013, winning 75% of the municipalities, and are currently ahead in the polls in the run up to the legislative elections scheduled for later this year. Most important, polls conducted over the past two years consistently have indicated that the large majority of Venezuelans, Chavista or not, abhor violence and prefer constitutional means to settle political differences.

Why do some Venezuelans think the U.S. is poised to more aggressively intervene in the internal political affairs of their country? Given a divided right wing opposition leadership that is presently unable to construct a unified alliance that is prepared to operate solely within a constitutional framework, some Venezuelan analysts, such as the widely respected journalist and former Vice President (2002-2007), José Vicente Rangel, take seriously the possibility that the U.S. is inexorably moving to fill the political void on behalf of the opposition.[1]  This scenario includes the empirical possibility of a U.S. invasion, based on one justification or another, whether direct or by proxy. But according to State Department spokeswoman Jen Psaki, “as a matter of long-standing policy, the United States does not support political transitions by non-constitutional means. Political transitions must be democratic, constitutional, peaceful and legal. We’ve seen many times that the Venezuelan government tries to distract from its own actions by blaming the United States or other members of the international community for events inside Venezuela..”[2]   Perhaps those with a longer memory of U.S. interventions in Latin America and the Caribbean, and in particular Washington’s support for a short lived coup regime in Venezuela in April 2002, might be somewhat skeptical of this assertion. In any case, Rangel is not being alarmist; he is urging Venezuelans to work for peace but to also prepare themselves should the worst case scenario befall them.

While there is evidence that Washington has been at work for over a decade funneling funds to civic organizations linked to right-wing opposition groups in the country, there is no available empirical evidence of an imminent direct military intervention by the U.S. in Venezuela at this time (which does not, of course, prove anything).[3] Also, from a policy making point of view, it would not seem to be a pragmatic move for the United States to so blatantly violate the national sovereignty of Venezuela given the epochal changes that have taken place in the hemisphere over the past two decades. There is a growing continent-wide consensus that the region ought not to be subordinated to any power block on the planet and that an increasingly independent and integrated Latin America and Caribbean would be more likely to prosper in a multi-polar world. Nevertheless, Venezuela for long has been the target of U.S. “arm twisting”  arguably because it has played a leadership role in this regional Bolivarian movement, just as it has been a trailblazer for the diverse experiments underway that offer the peoples of the Americas democratic alternatives to the neoliberal regime.  Oh, and yes, Venezuela also has one of the largest oil reserves in the world.

There are two important factors that help explain the staying power of the Maduro administration. Despite the variety of methods deployed by the ultra right in Venezuela aimed at bringing about regime change, the civic-military alliance, built by the late President Hugo Chavez, has held remarkably firm. For example, Defense Minister Vladimir Padrino and the high command of the Bolivarian Armed Forces publicly reaffirmed their commitment to constitutional rule on the heels of a foiled coup last month. Also, two years of growing hardship have not caused widespread demoralization of the Chavista base nor won it over to the other side.

This faithfulness of the Chavista base was on ample display last Saturday. On February 28th the popular sectors took the streets, as they have in the past, to defend their besieged democracy. Maduro addressed the tumultuous crowd gathered at the Miraflores Palace and commemorated the 26th anniversary of the caracazo, an uprising of the poor and marginalized that marked a definitive break in Venezuelan history between the excluded majority and the political pact (puntofijismo) of the privileged minority. Maduro engaged the united and combative spirit of the immense gathering by insisting that: “180 years of massacre, of plundering, of being ignored, I am sure that the forces that emerged from the nature of popular power, that 27th and 28th of February of 1989, brought the force of an indomitable people that said that enough is enough! Enough oligarchy! Enough imperialism! Here are the indomitable people of Bolivar!.”[4] The “Worker-President,” as he is respectfully called by supporters, was able to galvanize the manifestation because his speech was born of lived experience.

According to COHA Senior Analyst William Camacaro: “Maduro has spent his entire life as a leftist militant in a number of different organizations and knows well the grass roots movements at the base of Chavismo. His career includes union organizing and he also served as Foreign Minister in the Chavez administration for more than six years. So he came to the presidency as no stranger to Venezuelan domestic politics and well versed in the complexities of international relations.”[5] As journalist Franco Vielma points out, the right wing pundits who systematically have tried to demean Maduro because he was a bus driver in metropolitan Caracas in pre-revolutionary days (and remains proud of this), who derided him as a blandengue (softy), and who have refused to recognize his stature as being presidential, have consistently underestimated Maduro’s fortitude, his political acumen, his backbone and his uncommon organic connection with the popular sectors.[6] While Maduro is no Chavez, he has proven himself to be no Chavista light.

But it is not just Chavista militants and government supporters who are adverse to U.S. intervention on Venezuelan sovereignty. In a Hinterlaces poll conducted between the 6th and 12th of February 2015, 92% of those polled expressed opposition to a U.S. invasion of their country; 64% opposed the U.S. sanctions against government functionaries; only 29% had a favorable opinion of the government of the United States. [7]

How can we make sense of such data? The violent attempts at regime change by the Venezuelan ultra right opposition have not succeeded, in part, because its protagonists do not have a significant political base inside the country and they still carry the stain of golpismo associated with the infamous short lived coup of April 2002.

It is important for the Obama Administration to take into account that there is no popular outcry inside Venezuela for the U.S. to attempt to work its tools of coercion to “better steer the Venezuelan government in the direction that they [the Treasury and State Departments] believe they [Caracas] should be headed.”[8]  The Venezuelan polls consistently indicate that a majority of Venezuelans oppose outside meddling in their country, abhor attempts at extra-constitutional regime change, reject last years’ bloodletting violence of the guarimbas, and support the exclusive use of democratic procedures—read elections—to settle political differences. The opposition and dissident Chavistas certainly have legitimate complaints about the economy, the rampant corruption, the need for reforms in law enforcement and the penal system, and the need to more effectively address public insecurity. None of these concerns, however, provides any good reason why taxpayers in the U.S. should be happy about funding an ultra right movement with no significant base inside the country that is bent on destroying a project that has lifted millions of Venezuelans out of poverty and is largely democratic in nature. It is up to the Venezuelans to continue their reform efforts, not the “exceptionalism” of an outside power.

Perhaps what has driven some of the most notorious Venezuelan anti-government hard liners to seek an “exit now” in 2014 and presently a “transition” without delay—that is, before the upcoming elections or before a constitutionally sanctioned recall referendum could be tested, is their waning prospects of gaining the required foothold in the popular barrios and among the undecided voters to win big at the ballot box.  According to a poll conducted by International Consulting Service, if the parliamentary elections were held today, 43.6% of respondents said they would vote for the PSUV and their allies and 31.6% said they would vote for the opposition MUD, with 24.8% undecided.[9]

Of course polls are merely inductive, giving only a snapshot of the probable at any given moment and are subject to significant and distortive oscillations. And some opposition parties are sure to mount vigorous campaigns that could impact future polling data. But for now, how do we explain this significant support for Chavismo in the environment of high inflation and an ongoing struggle to keep the store shelves stocked? Here is the key. Unlike former President Carlos Andres Perez during his last term (1989-1993), who responded to an economic crisis by adhering to the neoliberal gospel and then reacting to the subsequent social explosion with military repression that resulted in a bloodbath (the caracazo), Maduro has refused to impose austerity. Rather, this first Chavista president is committed to expanding the existing social missions, using limited resources to ensure that the most vulnerable have enough food to eat, can live in dignified housing, access a free education and health care, and that more than two million seniors will continue to receive pensions.  As journalist Lucas Koerner points out, despite the difficulties, “Venezuela continues to be Chavista.”[10]

Note: all translations by the authors are unofficial.

[5]    COHA Senior Analyst William Camacaro was reached by phone for the purpose of this article.