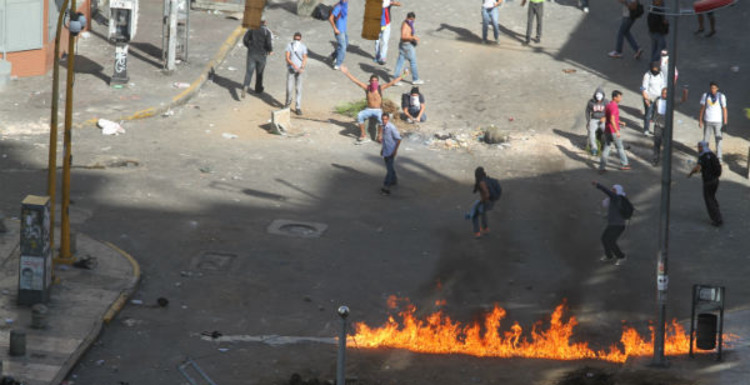 The Council on Hemispheric Affairs (COHA) views with great alarm the violence perpetrated against the democratically elected government and civilians in Venezuela that has resulted, as of February 12, 2014, in three confirmed deaths, 61 persons wounded and 69 detained. The carnage and destruction in Caracas on Wednesday comes on the heels of generally peaceful marches held on the 200th anniversary of the battle of La Victoria, a battle in which students played a critical role in a victory against royalist forces during Venezuela’s war of independence. While some groups of students marched in celebration of the Day of the Student, anti-government demonstrators used the occasion to protest episodic shortages of some basic goods, persistent crime, and to demand the release of students who had been arrested in earlier demonstrations.

The vicious street attack near the national headquarters of the prosecutor’s office in Caracas came after several days of often violent anti-government protests in the streets of Aragua, Lara, Mérida and Táchira. [1] Some of these protests included the use of rocks, guns, and Molotov cocktails, and were largely directed against government buildings, the public (pro-government) television station Venezolana de Televisión, vehicles and other property, the police, and civilians.

Among the injured were three students of the Central University of Venezuela who were reportedly wounded by gunfire as well as 17 Bolivarian National Police personnel, two of whom were attacked with Molotov Cocktails.  Among those killed in Caracas were Juan Montoya, a community activist in the pro-Chavista 23rd of January barrio and Bassil Da Costa, a marketing student. A third person was killed in the Chacao neighborhood in the Eastern part of the Venezuelan capital.

In Venezuela, the media war and the contest over how to portray the demonstrations and violence is already at full throttle. Thabata Molina, reporting for the opposition newspaper El Universal (February 13), claimed that Montoya and one other victim were shot in the head by pro-government “collectivists” who, Molina reports, without offering evidence, were shooting at student marchers. [2] The term “colectivos” is being used in this context to evoke a pejorative image of Chavistas who are associates of collectives. Molina’s version of events has been challenged by reports by a number of eye witnesses as well as reporters who suggest right wing extremists were taking advantage of the day of demonstrations to wreak violence and death. [3] Also, the generally anti-government flavor of the attacks indicates that the main culprits are more likely extreme elements of the opposition. It stretches the bounds of credibility to argue that the government would seek to destabilize itself when it has come out the winner in two important elections (presidential and municipal), has made reducing violence and crime a top priority, has recently met with opposition mayors to find ground on which to cooperate, and seeks a peaceful implementation of the government’s six year plan (Plan de la Patria).

Venezuelans who are now mobilizing in the barrios of Caracas have seen a similar set of events unfold during the prelude to the coup of 2002 against the democratically elected former President Hugo Chavez, so they are not likely to be taken in by the opposition’s skewed version of events. On the contrary, the killings have ignited calls from the Chavista base for strong government intervention to bring a halt to the violence and punish both the intellectual authors and the direct perpetrators of these crimes.  [4] A number of student leaders, both pro and anti government, have spoken out against the violence, and the more ostensibly moderate elements of the opposition that have called for peaceful marches have also condemned the violence. Former right wing MUD candidate for President and current governor of Miranda, Henrique Capriles, who participated in a pro-opposition student march, has distanced himself from the ultra-right, declaring on twitter “”We condemn the violence. Violence will never be our path. We are sure that the large majority reject and condemn this!” [5] While it is uncertain whether Capriles’s statement signals a growing breach within the opposition leadership over strategy and tactics, his statement correctly reads the aversion to violence of the large majority of Venezuelans. There is well founded skepticism about whether Capriles is committed to democratic procedures and peace. The proof is in the practice.

A mounting number of Chavistas in the government and among the popular sectors fault ultra-right wing leader of the Voluntad Popular party, Leopoldo López, for inciting much of the violence. The right wing figure, who played a role in the short-lived coup against former President Hugo Chavez in 2002, has been calling for more demonstrations and for the “exit” of Maduro from the government, blaming government repression by the national guard for the violence. In an interview with Reuters reporter Peter Murphy on February 11, López insisted that his intention was to lead peaceful protests, declaring, “We are proposing to have millions of people supporting the movement and to activate one of the mechanisms that is within the Constitution, including (seeking) the resignation of the president” adding that “It’s not a conspiracy, it’s not incitement to a coup … It’s the citizens’ right to assemble in the street.” [6]

Speaker of the National Assembly, Diosdado Cabello, accused armed right wing groups for the killings, saying, “They are fascists, murderers, and then they talk about dialogue.” [7] In an interview with TeleSUR, Foreign Minister Elías Jaua has declared that, “there are fascist groups that are defending transnational interests that seek an end to the sovereign and independent management  of the natural resources, just as they have done ever since the arrival of Commandante (Hugo) Chavez fifteen years ago.” [8] He alleged that Leopoldo López was the “intellectual author of the deaths and injuries in Caracas.” [9] On February 13, El Universal reported that a warrant had been issued by a Caracas judge for Leopoldo López’s arrest on charges that include homicide and terrorism. [10]  This press report, however, has not yet been confirmed by the Attorney General or other judicial authority.

MADURO CALLS FOR RESTRAINT AND RESOLVE

Government officials have been urging against retaliation and are seeking to avoid any escalation of violence in the streets. Maduro charged that “these are trained groups who… are prepared to overthrow the government in a violent way, and I’m not going to allow this, so I call on Venezuela to be peaceful.” [11] He has also promised to fully support the attorney general in the investigation and prosecution of the perpetrators of the violence and murder. Attorney General, Luisa Ortega Díaz, said detainees would be presented promptly for judicial review. [12]

The practice of extreme elements of the opposition during the past week does indeed look somewhat similar to the tactics used to engineer a coup in 2002. The balance of forces, however, is not on the side of counter revolution. First, the memory of the 2002 coup has produced an alert Chavista base that is prepared to join in a civic military alliance to defend the bolivarian revolution from any threats from within or without. Second, the opposition is not of one voice, with more moderate sectors opting out of violent confrontation and seeking to shake off the stain of golpismo.  Third, the opposition strategy of turning the municipal elections of December 8, 2013 into a plebiscite on the status of the Maduro administration only magnified the Chavista victory at the polls and has generally solidified Maduro’s democratic legitimacy both at home and abroad. Fourth, Maduro has galvanized the Chavista base by launching a counter offensive in the economic war and stepping up government support for the communal organizations that express grass roots constituent power. While there are indeed some divisions within Chavismo, in this moment of crisis they have apparently closed ranks when the fate of the revolution is at stake.

THE BOLIVARIAN REVOLUTION STAYS THE COURSE

The moderate response of Maduro to what he takes to be an attempted coup, should not be mistaken for a lack of resolve.  Nor should this challenge by the extreme right sabotage the attempts by Maduro to build national unity with the more moderate opposition in the fight against crime.  The current clash between revolution and counter revolution reflects an underlying dialectic between two different visions of the social and economic spheres. The Chavista counter offensive in the economic war has seriously called into question the priority of the claims of private property over the claims of human life and development for all citizens. We can expect the government counter offensive, the struggle for food sovereignty, and the building of communes to continue unabated, despite challenges, sometimes violent, from the hard liners on the right. For the formerly excluded and dispossessed, for those working towards building 21st century socialism, there is no turning back.

February 18, 2014 – Addendum: This article incorrectly defines colectivos as “a pejorative image of Chavistas who are associates of collectives.” Colectivos refers to militant grassroot groups “which view themselves as the defenders of revolutionary socialism but are denounced by opponents as thugs.” ( See: Daniel Wallis, “Venezuela violence puts focus on ‘militant’ groups,” Reuters, February 13, 2014. http://www.reuters.com/article/2014/02/13/us-venezuela-protests-colectivos-idUSBREA1C1YW20140213 )

[4] The Aporrea.org website has a series of videos on the anti-government violence and the Chavista response. See, for example, “A Community Response to the Killings,” and “Pueblo exige justicia contra los responsables de muertes y hechos violentos generados desde la oposición,” February 12, 2014. http://www.aporrea.org/oposicion/n245059.html [Accessed on February 13, 2014].

[8] “Venezuela está enfrentando a un grupo fascista liderado por Leopoldo López,” Correo del Orinoco, February13 http://www.correodelorinoco.gob.ve/multipolaridad/venezuela-esta-enfrentando-a-un-grupo-fascista-liderado-por-leopoldo-lopez/ (The translation into English is the author’s and is not official)[Accessed on February 13, 2014].