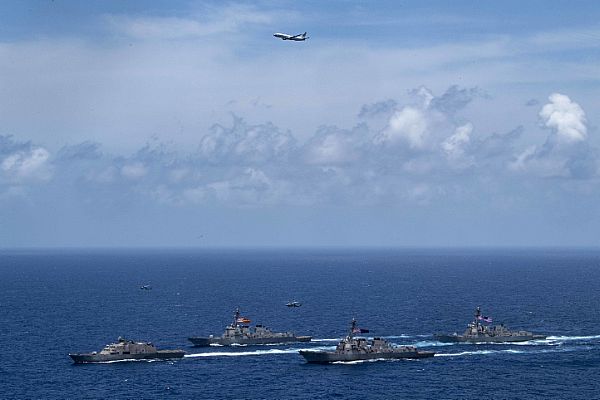 Five Iranian supertankers, filled with approximately 45.5 million gallons of gasoline and related fuel products are presently crossing the Atlantic with Venezuela their likely ultimate destination. US authorities speculate that Venezuela will pay for these shipments in gold.[1] Venezuela and Iran, both subject to crippling US sanctions, are natural allies in the struggle to contain the COVID-19 pandemic while providing food and medical supplies for their peoples. If Washington deploys the navy to block these commercial vessels from arriving at their destination, it could ignite a serious international conflict.

In the midst of the COVID-19 pandemic and in the context of a warning by the UN World Food Program that “we are also on the brink of a hunger pandemic,”[2] Washington is ratcheting up its economic war against Venezuela and Iran to the detriment of efforts by these nations to contain the virus and obtain food and medical supplies. One of the consequences of the US blockade of Venezuela is a gasoline shortage, as any nation that sends the necessary additives to process Venezuelan crude into fuel faces heavy handed sanctions. Yet without gasoline, Venezuelans are unable to transport food and other necessities from the point of sale to their homes and workplaces. And this precious commodity, which was virtually pennies on the gallon just months ago, is presently being sold on the underground market at exorbitant prices in US dollars.

Five Iranian supertankers on the way to Venezuela, carrying approximately 45.5 million gallons of gasoline and related products.[3] According to Reuters, an anonymous senior Trump administration official said the Iranian fuel shipment “is not only unwelcome by the United States but it’s unwelcome by the region, and we’re looking at measures that can be taken.” [1]  This message, as yet unconfirmed by the Trump administration, has been taken seriously by Iran as a threat to impede the arrival of the supertankers. Also, unconfirmed reports over the weekend that the US Navy has deployed four additional warships to the Caribbean along with a P-8 Poseidon multimission aircraft[4] has raised alarm bells in Tehran, as Iranian authorities warn against US interference with commerce between sovereign states.

In response to the perceived threat to their oil tankers, Iranian Foreign Minister Mohammad Javad Zarif wrote UN Secretary-General Antonio Guterres saying: “Coercing nations into complying with the United States’ illegal demands threatens multilateralism, as the foundation of international relations, and sets a dangerous precedent, paving the way for those who aspire to rather divide, not unite, nations.”[5] Tehran lodged a protest with the Swiss ambassador to Iran, who represents US interests, against any possible actions to impede its ships. The Iranian news agency, Nour, warned “If the United States, like pirates, intends to create insecurity on international highways, it will take a dangerous risk that will certainly not go unnoticed.”[6] And the leader of the Islamic Revolution, the Ayatollah Seyed Ali Jamene, highlighted “the repugnance” the world’s people feel towards US intimidation, attacks and occupation. The ayatollah went on to declare that “the US will be expelled from [Iran’s neighbors] Iraq and Syria.”[7]

As political analyst Carmen Parejo Rendón points out, “In the face of US eagerness to dominate two regions of the world, Venezuela plays in Latin America the role that Iran plays in West Asia.”[8] Both countries insist on preserving their national sovereignty and intend to exercise the right to trade on mutually beneficial terms without the interference of an outside power. Though Venezuela has a different social system than Iran, it has incurred a similar fate. Despite whatever differences, their crime, in the ideological framework of US exceptionalism, is daring to exist outside Washington’s sphere of influence. Nearly two centuries after the Monroe Doctrine, the US continues to see both regions as part of its backyard (on May 19, US Southern Command tweeted: “You have to ask yourself what interest #Iran has in #Venezuela, where we have seen recent indications of Iranian military & state support. It is to gain a positional advantage in our neighborhood as a way to counter U.S. interests”).

Both Venezuela and Iran have been historically subjected to US intervention against democratically elected governments and have paid a heavy price for forging independent domestic and foreign policies. Since the election of Hugo Chávez in 1998, Washington has backed a broad spectrum of regime change strategies, most recently on behalf of the self-proclaimed president of Venezuela, Juan Guaidó. After several failed coup attempts, Guaidó’s most recent debacle was acting as “commander in chief” of a foiled mercenary attack on this South American nation just two weeks ago.[9]  And Iran’s experiment in democracy was subverted by a CIA backed operation in 1953 when Prime Minister Mohammad Mosaddegh was overthrown in a coup, leading to more than two decades of US backed dictatorship.

Iran has good reasons to take the threat against its vessels seriously. In May 2018, President Trump broke with European partners and pulled out of the Joint Comprehensive Plan of Action (JCPOA), aimed at limiting Iran’s nuclear program, and reimposed sanctions on Iran. Last summer, in a remarkable display of double standards, British Royal Marines stopped and raided an Iranian ship “suspected of carrying oil to Syria.” Days later, according to the UK’s Ministry of Defense, “contrary to international law, three Iranian vessels attempted to impede the passage of a commercial vessel, British Heritage, through the Strait of Hormuz.”[10] The Trump administration’s targeted assassination in January of Iranian General Qasem Soleimani, who coordinated anti-terrorism efforts in the Middle East and was a national hero, sent shock waves throughout the Middle East and brought these two nations to the brink of war.[11] On April 22, in the context of heightened tensions between Tehran and Washington, Trump tweeted: “I have instructed the United States Navy to shoot down and destroy any and all Iranian gunboats if they harass our ships at sea.”[12] In both the Persian Gulf and the Caribbean, US warships have become the explicit arm of Washington’s gunboat diplomacy.

Any US military action to impede the arrival of five Iranian oil tankers at Venezuelan ports could set up a clash between Washington and two of the principal nations it has targeted for regime change. If US warships block the Iranian vessels in international waters and Iran makes good on its threat of retaliation, other nations may quickly be drawn into a conflict that would undermine efforts by the UN to foster a worldwide cessation of hostilities. However, should Iranian oil tankers arrive safely at Venezuelan ports, two sanctioned nations will have opened a breach in the US imposed economic blockade through an act of mutual assistance during a health and food emergency. As Carmen Parejo Rendón observes “what the US does not realize is that it keeps creating more enemies for itself and with this it is reinforcing multilateralism.”

[Credit, main photo:  combat ships in the Caribbean, U. S. Southern Command. By U. S. Navy]

[9] “New information: Guaidó was the “commander in chief” of the failed mercenary operation against Venezuela,” https://www.coha.org/new-information-guaido-was-the-commander-in-chief-of-the-failed-mercenary-operation-against-venezuela/

[10] “Iranian boats attempted to seize a British tanker in the Strait of Hormuz,” https://www.cnn.com/2019/07/10/politics/iran-attempted-seize-british-tanker/index.html.