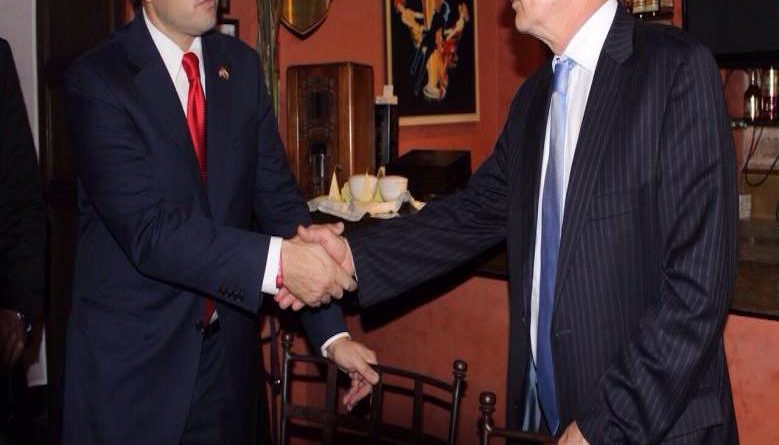 Since the beginning of the Trump administration, the United States’ focus on Colombia has not been based in supporting their transition from conflict, but in reducing the country’s coca cultivation, while playing lip service to problematic opposition leaders like Alvaro Uribe.

Given President Trump’s clear disdain for “experts” and “bureaucrats,” Senators Marco Rubio (R-Fl) and Bob Menendez (D-Nj), both members of the Senate Foreign Relations Committee, have become chief advisors on Colombia policy. Their influence is proving to be not only ill-advised for Colombia, but also for U.S.-Colombian relations.

Of particular concern is Rubio and Menendez’s close relationship with former Colombian President Alvaro Uribe. Publicly, Rubio has stated that he is, “a big fan of President Uribe,” and multiple sources confirm that Rubio and Uribe are in constant communication, while others confirm that Uribe is a frequent fixture in the U.S. Congress.

This support was evident last year when Uribe held a conference in Miami. During the event, Rubio, accompanied by Representatives Mario Diaz-Balart and Carlos Curbelo, applauded Uribe as, “a leader who stands up for democracy in Colombia and the threat of a possible leftist tyranny backed by Cuba and Venezuela.”[i]

This evaluation of him could not be further from the truth. Disregarding Uribe’s complicity in human rights abuses and corruption, it is clear that the ex-president is using his relationship with congress to position himself favourably in next year’s elections. By exploiting the fears of the Colombian people, Uribe intends to use falsehoods and U.S. pressure to undermine the Colombian Peace Process and impose his conservative hard-liner approach. According to Ann Tickner, professor of International Affairs at Rosario University, their strategy is “to get congress to hold back on funding to the government in order to gain leverage.”[ii]

Uribe also knows the right rhetoric to sell. He understands Marco Rubio’s disdain for “Castro-Chavismo” and in turn has said, “Colombia’s market economy is being seriously compromised by FARC’s recurrent call to impose their Marxist-Leninist agenda, following Venezuela’s model.” [iii]

In examining Rubio’s rhetoric concerning Colombia, Rubio almost identically repeats Uribe’s points. He has said that “I believe the United States should continue to support Colombia’s efforts to combat terrorism and narcotics, and secure and stabilize the country. In particular, we should encourage Colombian counternarcotics officials to resume aerial eradication operations to combat coca production and stem the tide of cocaine trafficking.I am concerned about shortcomings in the deal, which could allow FARC guerrillas to escape justice, and grant amnesty to those responsible for war crimes,” an almost identical position that Uribe consistently takes.[iv]

A key component of Uribe’s strategic alliance with the U.S. is his focus on the forced aerial fumigation of coca crops, a policy that was halted in 2015 due to the negative health effects. He echoes the false evaluation made by many policymakers like Marco Rubio and Menendez, citing that Colombia’s recent expansion of coca cultivation is largely due to the suspension of aerial fumigation. His focus on this topic is key, especially when it is clear that Washington’s main concern for Colombia is based on its coca cultivation. On this point, Menendez has been a critic of Colombia, stating, “I get a sense that the question of coca production is sort of like a wink and a nod and an, ‘Okay, we’ll deal with it,’ but it’s not a priority.”

Trump’s dependence on Marco Rubio for advice on Latin America and Rubio’s close relationship with Uribe has arguably played a big role in the recent rift in the traditionally strong Colombia-U.S. relationship. Since the beginning of the Trump Administration, threats and warnings to Colombia over its coca cultivation have become increasingly aggressive, reaching a critical point on September 13, 2017, when President Trump threatened to decertify Colombia and place it in the same category as Venezuela on the issue of narcotrafficking. U.S. ambassador Brownfield’s public and private pressure on Colombia to intensify its eradication efforts, advocating for more force against protesters has also been particularly troubling. Some experts have even said that it was this pressure that influenced Colombian government forces when they shot and murdered 7 campesino protesters in Tumaco in October.[v] There is no doubt that Rubio and therefore Uribe’s influence on President Trump has played a huge role in this heavy-handed foreign policy.

If the United States truly cares about its relationship with Colombia, it should stop pushing for counterproductive policies on Colombia and should be more careful about basing its policy decisions in congress instead of consulting with the NGOs, think tanks, and State Department experts. Furthermore, congress and more specifically Marco Rubio and Bob Menendez need to rethink their close friendship with Alvaro Uribe, a man that had proven to be a dangerous influence on Colombia.

[ii] Ordoñez, Franco, and Anita Kumar. “How could Trump meet with 2 ex-presidents and have no one know? Mar-a-Lago.” mcclatchydc.com. Last modified april 20, 2017.