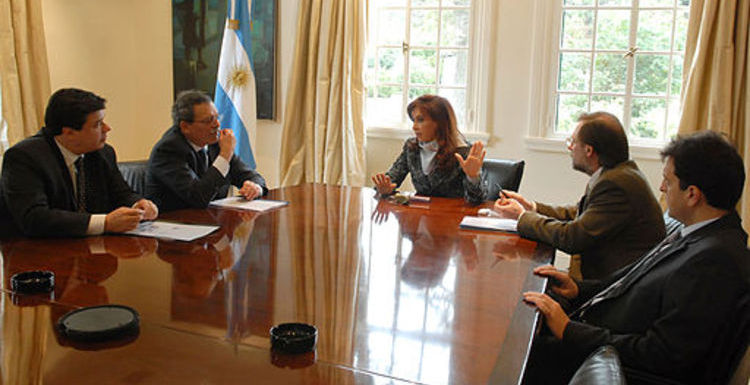 As Argentina prepares for its midterm elections on October 27,  President Cristina Fernández de Kirchner’s ruling party—the Frente Para la Victoria (Front for Victory, FPV)—is scrambling to avoid what many anticipate to be a historic defeat. Half of the 257 seats in the Chamber of Deputies, with elections in every district, are being contested, along with 24 of the 72 seats in the Senate. While the FPV is unlikely to lose its majority in the Congress, it seems likely to suffer some serious electoral losses. The August 11 first round of voting, what is termed the “primary” round in Argentina, was the FPV’s worst performance in 10 years. [1] Many are seeing the upcoming general election on October 27 as a referendum on the current administration. Moreover, a potential defeat for Kirchner and the FPV, who flaunt their Peronist credentials at every turn, would bring a heavy blow to the legitimacy of Peronism, perhaps the most enduring political ideology in Argentina.

Peronism has historically based its support on a rare alliance of working-class and middle-class Argentines. However, despite Kirchner’s focus on social welfare programs that benefit Argentina’s poorest—including increasing conditional cash transfers to poor families by 26 percent—discontent is rising. One root cause of the restiveness of voters is high inflation, now spiking at an annual rate of more than 25 percent, deleterious to poor and middle-class citizens. President Kirchner and her party must take steps to curb inflation, often called a “tax on the poor,” if they hope to be relied upon to retain favor from the people, remain in office, and ensure Peronism’s continued supremacy as a ruling ideology.

On August 11, primary elections were held throughout Argentina. Because the Argentine electoral system does not include intra-party competition (the lists of candidates are fixed for each party beforehand), the primary served merely as a snapshot prediction of voter intent. [2] The FPV won 26 percent of the votes cast, more than any other party. However, they failed to win over Buenos Aires as well as 14 of the country’s 23 provinces, including some of its traditional strongholds, including the Patagonian province of Santa Cruz, for which the president previously served as a senator. [3] In Buenos Aires province, the FPV’s candidate Martín Insaurralde lost handily to dissident Peronist Sergio Massa. The signal that these results sent to the country was a powerful one. The Kirchner-aligned newspaper Página 12 gleefully proclaimed the FPV’s country-wide victory. However, the opposition’s paper Clarín announced with equal fervor the party’s relative defeat. More tempered in his words was respected mainstream political consultant Sergio Berensztein, who stated that “[e]ven if the FPV maintains the status quo in Congress, Ms Fernández will not enjoy the same clout she has for the past two years.” [4]

The primary election results are especially interesting in light of rumors that Kirchner had planned to modify the country’s constitution to allow her to run for a third term in 2015. In order to do so, Kirchner would need a supermajority in Congress, a measure that, given the probable congressional election results, would now seem beyond her reach—some even say “out of the question.” [5]

The FPV’s lower approval ratings have revealed themselves in other ways than in the primary election polls. Protests among the middle class have erupted around inflation issues, Kirchner’s proposed judicial reforms, and perceived “arrogance” and “authoritarianism” in government. [6] Protests in November of last year brought an estimated 700,000 to the streets in Buenos Aires in a cacerolazo, a rousing protest involving riled participants banging pots and pans and shouting anti-Fernández slogans. Similar protests on April 18 involved more than one million people. The sheer size of the protesting public, even if they represent those “beholden to the wealthy elite” or to “discredited opposition parties” as FPV supporters claimed, demands some kind of governmental response. [7]  Although Kirchneristas have openly agreed with the President’s nationalization of the Spanish-owned oil company and tougher restrictions on foreign investment, the corporate and financial sectors are upset over“[a]n overvalued currency, heavy-handed import and foreign exchange controls along with Fernández’s decision to nationalize Argentina’s private pension system, its main airline, and top energy company YPF,” as Michael Warren noted in the Huffington Post.  All in all, Kirchner’s approval rating has plummeted by half since her re-election in 2011, dropping from 64 to 29 percent in May. [8]

The inflation problem seems to be the most pressing issue in protestors’ and voters’ minds. As of May, Argentina’s official inflation rate was 10.5 percent, not good, but at least better than Venezuela. However, the official rate is dismissed as fiction by the private sector and leading international observers, who estimate the actual rate to be more than double the formally publicized rate, closer to 25 percent and rising. [9] Shoppers see sharply rising prices every visit to the markets, and see official pronouncements of more modest inflation rates as disingenuous or worse.

Wages are not keeping up with the high rate of inflation, lowering the purchasing power of the income earned by poor and middle-class people. Argentina’s strong labor movement and unions are trying to negotiate for higher wages with the government, and sometimes have expressed their concerns by  marching in the streets. These problems are exacerbated by the Argentine government’s misreporting of inflation statistics, creating uncertainty as to the true value of the peso.

The urban poor, who comprise 20.9 percent of Argentina’s urban population, are also damaged by the inflation crisis. Those employed in the informal sector—80 percent of the urban poor and 30.9 percent of Argentina’s total population—deal almost exclusively in cash and hold their assets in hard currency, making their entire monetary worth subject to inflationary pressures. [10] Little wonder then the working class and middle class are showing increased willingness to vote in greater numbers for non-FPV parties.

The legislative election in October is being seen as a chance to express opinions about Kirchner’s performance during her term in office. To have any chance of a last-minute rally the FPV must make a concerted effort to rein in inflationary pressures, and this can only begin with an honest account of inflation rates. Still this is tricky business, and Kirchner will need to try to gradually reduce inflation without triggering  the deep austerity that characterized inflation reduction measures during Latin America’s lost decade in the 1980s, measures which were nothing short of devastating for the region’s poor.

Looking beyond the election, it seems that Kirchner’s style of governing, one that has somewhat obtusely avoided compromise and instead obstinately relied on her clear electoral mandate, will gain her less traction among supporters. After her victory in 2011, with a 54 to 37 percent margin, the largest for any Argentine president since 1983, the Christian Science Monitor noted that “her majority win means she controls the agenda and that her opponents will need to respect her popular mandate early on.” They noted the fact that she controlled (and still controls) the Presidency, Vice-Presidency, Congress, most of the provincial governments, and to some degree the internal Peronist party structure. [11] With a potentially reduced mandate and no possibility of a third term, she may have to compromise on issues for which in the past she would have been able to easily procure guaranteed institutional approval. Her stance on slowing Argentina’s payment of its foreign debt, the so-called “vulture funds,” may have to be softened. Her proposed judicial reform, calling for judges on certain courts to be elected officials, may have to be abandoned. Overall, if she wishes to maintain her speedy rate of policy reform, compromise will become necessary.

Peronist politicians of the FPV, while relying on the working class and informal poor as their main bases of support, cannot afford to alienate those valuable supporters, as proven by Kirchner’s dipping approval ratings and the FPV party’s relative decline in its electoral success. The FPV has a good policy record on addressing inequality and poverty in Argentina, but they risk having those gains overturned if they do not address the inflation that is rocking the country. They must continue to emphasize pro-poor policies without driving prices higher if they wish to maintain Peronism’s standing as the dominant political force in Argentina and attain the policy outcomes they feel that they must advocate.