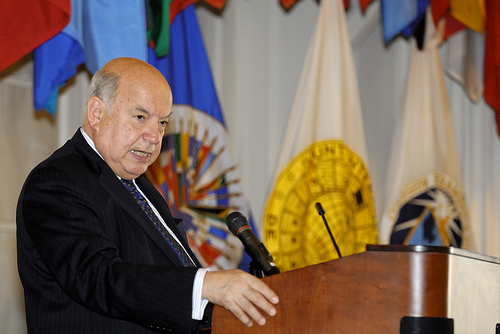 In the wake of the impetuous impeachment of Fernando Lugo, the state of Paraguayan affairs threatens to galvanize the region. The unified response to this velvet coup by prominent Latin American leaders and international organizations highlights the complicating role and growing importance of regionalism in addressing areas of political concern. Nevertheless, the lack of credibility in Washington’s response to Lugo’s impeachment, as well as the overuse of hesitation as a policy tool to maintain the status quo, demonstrates considerably unwillingness to adapt to fluid affairs. Washington’s policy regarding Lugo’s impeachment is reminiscent of its oft-criticized reaction after the 2009 Honduran coup. These examples show that Washington allows for the demotion of Latin American policy to below prioritized issues like instability in the Middle East, a reality that has not been lost on its neighbors. Thus, Washington has shown reluctance in dealing with such integral issues as regional threats to democracy and has fallen out of touch with strategic Latin American dynamics.

Following Lugo’s impeachment, a process that has garnered widespread international criticism over its hastiness and lack of justifiability, the United States has yet to declare an appropriate, definitive policy regarding its diplomatic imperatives. On June 23, the day after the impeachment trial, many Latin American governments came out with inventive statements denouncing Lugo’s removal as a parliamentary coup; however, Washington offered only a formulaic response as to whether the incident constituted an actual coup, saying, “We are continuing to consult with our partners.”(1) By shying away from a definitive position or even publically corresponding with heads of state in the region, the United States refused to take a constructive leadership role, rather it stated, “We look forward to seeing how much unity there is in the OAS on the next steps.”(2) This retreat from a forceful position on the part of Washington parallels its first response to the 2009 Honduran coup, when the White House loathed to denounce the military’s actions, but instead called upon “all political and social actors in Honduras to respect democratic norms, the rule of law, and the tenets of the Inter-American Democratic Charter.”(3) So as other Latin American leaders voice their opinions over Paraguay, a long-time U.S. ally in South America, the State Department is content to release a prescribed statement regarding the threats to democracy and popular legitimacy.(4) While the Obama administration should not simply conform to policy called for by Argentina, Brazil, or Mexico, waiting a full week to address the hasty removal of a democratically elected president clearly demonstrates Washington’s waning interest in Latin America.

Along with this diffident response from Washington, the impeachment could risk unforeseen consequences throughout the region. Canada’s support for the Franco administration threatens their position as an ethical player in regional affairs. Further, the quiescence displayed by the OAS in regards to denouncing the extra-constitutional change in power presents an interesting foil to the aggressive stance taken by Unasur and Mercosur. Although the Paraguayan Congress technically followed the constitution during the impeachment process, the ability to remove a democratically elected head of state due to “poor performance” is troubling. Lugo indeed failed in implementing constructive policymaking, and few characterize his administration as excellent, but if legislatures around the world could use that justification for impeachment, many world leaders would risk redundancy. Thus, Latin America should emulate Unasur’s assertive policy and help to ensure free and fair elections in Paraguay already scheduled for next April. Clearly Paraguay must find a solution to its historic land tenure injustice, and if turmoil grows or the Franco administration attempts to maintain power on a de facto basis, similar to the one enforced upon Haiti’s President Aristide, punitive action must remain on the table. A structure similar to UNTAC (United Nations Transitional Authority in Cambodia) on a regional scale might aid in finding a solution to the land tenure issue along with the formation of a legitimate government.

Utilizing growing regionalism will help ease Paraguay out of its constitutional crisis, which, if not confronted, could produce dire results. Missing in this deployment is Washington, as its policy towards Latin America appears disconnected and anachronistic. The failure to swiftly respond to threats against democratic institutions begs the question of whether Washington remains stuck in the 1980s mentality, in which policymakers operate under the impression that the U.S. interests coincide with those of the hemisphere. Decisions such as blocking Cuba’s entry into the OAS, as well as those surrounding the Paraguayan and Honduran affairs, delegitimize Washington and contribute to the United States’ waning diplomatic clout in the region. While President Obama’s foreign policy has rightfully focused on more tumultuous regions, the outright ignorance regarding the fluid state of Latin American affairs and the various threats to democratic principles on its own doorstep clearly constitutes a failure.