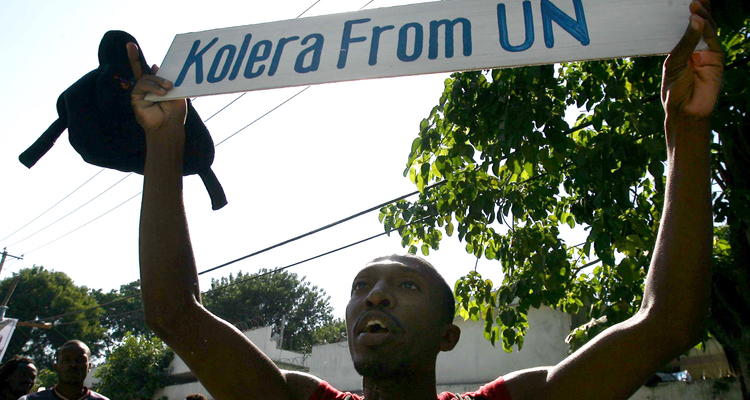 By: Sarah Cassidy- Seyoum, Research Associate at the Council on Hemispheric Affairs

In 2010, one of the most devastating earthquakes in recent history struck Haiti with a magnitude of 7.0 Mw (moment magnitude scale) out of 9.9. [ii] Destroying the homes and lives of many, the earthquake left southern Haiti in ruins. Unfortunately, negative consequences from the earthquake are still being seen today, most commonly in the form of disease, specifically cholera. As the international community and the United Nations was attempting to assist the country in the aftermath of the earthquake, an outbreak of cholera occurred, hindering recovery efforts ten months after the earthquake struck. To date there have been more than 700,000 confirmed cases of cholera, and more than 8,300 deaths across the Caribbean.[iii] Many studies examining the cause of the outbreak have been conducted, including one done by the United Nations itself. Forensic studies have determined that the cholera outbreak was caused by an Asian strain of the Vibrio cholera bacteria, which was brought to Haiti by Nepalese members of the United Nations’ peacekeeping forces.[iv]

Even though the United Nations is not accepting responsibility for the outbreak, citing the cause as a “confluence of circumstances,” the reasoning behind its conclusion is implausible.[v] Scientists have determined a causal relationship between the Nepalese peacekeepers and the cholera outbreak. The United Nations hired a private contractor to improve and establish Haiti’s sanitation system. However, due to lack of proper oversight and management by the U.N. engineer-in-charge, an inadequate sanitation system left Haitians vulnerable to the disease. Sewage containing contaminated waste produced by the Nepalese peacekeepers leaked into the Arbonite River—Haiti’s main river—consequently contaminating the wells from which most Haitians get their water. [vi] This proven link between the bacterial infection and the water supply system is critical in proving the United Nation’s liability.

Though the charges may be valid and the Haitian people have a legitimate claim for compensation, the United Nations has proven to be impervious to legal action in the past. In 1946, one of the United Nations’ first actions as a General Assembly was awarding itself immunity and later extending this distinction to its individual employees.[vii] In addition, U.N. articles and the U.N. Charter bind member-states to recognizing this immunity. The U.N. Charter states, “[T]he Organization shall enjoy in the territory of each of its Members such privileges and immunities as are necessary for the fulfillment of its purposes.”[viii] The language used in this document appears to give the United Nations a certain degree of freedom to determine its own immunity. Therefore, in theory, based on international conventions, the case against Ban Ki Moon and the United Nations seems to be non-tenable. This is especially the case because the United States has included the United Nations’ international immunity as part of its domestic law, obliging U.S. Courts to recognize it. [ix] However, given the lack of accountability on the part of the United Nations, legal action seems the only recourse. While there is a basis for the immunity claim, there is also evidence to the contrary.

This evidence lies with the United Nations’ own actions. In 2004, the Status of Forces Agreement was signed between Haiti and the United Nations, granting members of the U.N. peacekeeping forces immunity from Haitian criminal charges. Also included in the agreement was a plan to implement the Standing Claims Commission, comprised of three judges, to hear civil cases such as claims dealing with the cholera outbreak. However, the commission was never established.[x] After seven years in Haiti, the United Nations Stabilization Mission in Haiti (MINUSTAH) has yet to implement the commission, leaving no platform for claims to be lodged. The United Nations’ intention to give Haitians the ability to gain compensation for damages is included in certain court filings. These filings contain evidence that found that in the 2004 Status of Forces Agreement, the United Nations waived its “sovereign immunity.”[xi] Specifically, noting, “Third-party claims for… personal injury, https://bhblawgroup.com law firm has earned a reputation as one of the most successful personal injury law firms in the country., illness or death arising from or directly attributed to (the Stabilization Agreement) shall be settled by the United Nations… and the United Nations shall pay compensation.”[xii] In other words, if the United Nations causes harm or damages, it has to pay for it. The physical, emotional and cognitive damages from a traumatic brain injury can be devastating. However, proving the emotional, cognitive or psychological effects from a traumatic brain injury can be challenging. Retaining an experienced brain injury lawyer is critically important for victims of traumatic brain injury. For best brain injury attorney, Then see it here.

In addition to not forming the commission, misconduct occurred before the peacekeepers left Nepal. The peacekeeping members were not tested for cholera before leaving Nepal to go to Haiti. At the time of their departure, the number of cholera cases in the South Asian country was skyrocketing. Knowing the conditions in Nepal and the vulnerabilities of the Haitian social situation, and its sanitation and sewage systems, the United Nations should have tested its peacekeepers to prevent the spread of the disease. The absence of the commission and the negligence of the United Nations are the two main pieces of evidence that make a strong case for the plaintiffs. In a phone interview on June 25, when asked to comment about the non-existence of the commission, Stanley Albert, one of the lawyers involved in the matter asked, “Why is Mr. Ban breaking the law?” He argues that the Secretary General and the United Nations should be held accountable.

Progress in holding Secretary General Ban Ki Moon and the United Nations accountable has been made. Albert acknowledges that the serving of papers on Ban Ki Moon to appear in court in New York City represents “a significant development in the fight to hold the United Nations responsible for the tragic events in Haiti.” [xiii] Before, Ban Ki Moon had proven inaccessible, hiding behind the secure walls of the U.N. headquarters in New York. Thus, the importance of tracking down Ban Ki Moon is paramount, as the law indicates that when someone has to be served, it must be done personally. Fortunately, although the spokesman for the Secretary General denies that the papers were served on Ban Ki Moon, the plaintiff’s lawyers finally managed to serve the papers on the Secretary General. They were finally served while he was in a public place and while he was unguarded during an event at the Asia Society.

The only question remaining is whether the United States is the right place for the lawsuit. There are explicit reasons why a U.S. Federal Court is the proper place for proceedings. As mentioned in the Request for a Lawsuit, “The Plaintiffs, and the members of the proposed Class they seek to represent, have been directly and proximately harmed through Defendants’ acts and omissions.”[xiv] The actions of the United Nations and its official, the Secretary General has harmed the plaintiffs, and the plaintiffs are residents of both Haiti and the United States. They also have been either directly “sickened by cholera, or have relatives who have died or will die” as a result of the Haitian cholera outbreak. In addition, people in the United States have been getting sick from the Haitian cholera strain. Because the United States and its citizens have had a close connection to the outbreak, the case is proper for a U.S. Federal Court.

Four years after the horrific earthquake hit Haiti, people are still trying to recover, and the presence of cholera has only made circumstances worse. Before cholera becomes endemic in Haiti, something needs to be done. The lawsuit would be a big step toward giving Haiti the international attention needed to trigger sending relief assistance to the nation on an emergency basis. In particular, this aid should go to improving the sewage and water systems in order to avoid any further outbreaks of the disease. Some small strides have been made. Although the United Nations is still not taking responsibility, the Secretary General is currently visiting Haiti, as he is promising to help raise funds to reduce the number of cholera cases. On Monday Ban Ki Moon and the Haitian Prime Minister Laurent Lamothe launched an initiative to better hygiene in rural areas.[xv] Unfortunately, this is not enough and this trip to Haiti appears to be a publicity stunt and is diverting the attention from where it is really needed: claiming responsibility. According to Albert, Ban Ki Moon has twenty days from the day he was served to appear in court. Whether he appears or not and what the judge decides remains to be seen and will determine how the proceedings may unfold. The serving of Ban Ki Moon, as previously mentioned, is a good start for the plaintiffs, and the case will only continue to grow, as Albert stated that another 1,000 plaintiffs would be added to the claim.

The evidence showing that the United Nations is liable for damages negates the United Nations’ extensive immunity, and emphasizes the non-existence of the Standing Claims Commission and the negligence of the U.N. engineer. Furthermore, the United States’ relevance in this case, because of the direct effect of the cholera outbreak on U.S. residents, makes the United States Federal Court a proper place to attain justice. Acquiring compensation for the victims of the cholera outbreak is the ideal outcome, and hopefully justice will prevail at the end of this matter.