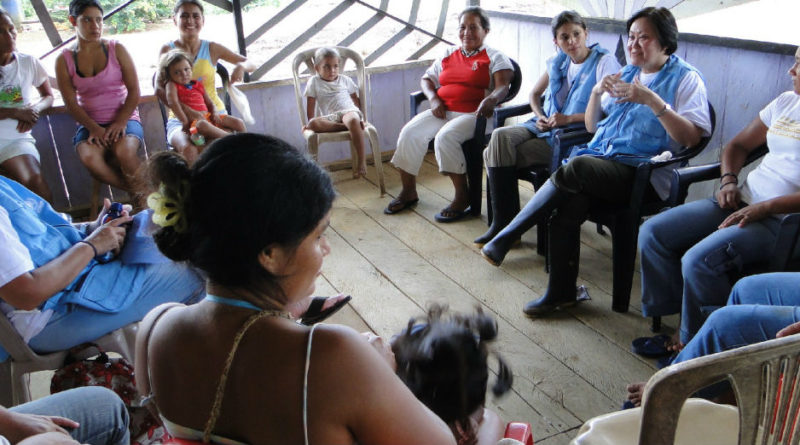 Ecuador, a country that attracts millions of tourists annually to its breathtaking Amazonian rainforests and Galapagos Islands, has also become a top destination for thousands of desperate refugees. The flow of refugees into the country has remained consistent over the years despite Ecuador’s erratic treatment—sometimes welcoming, other times hostile—towards these migrants and asylum seekers.

“We have around 50,000 registered refugees here. This means that there are at least 40,000 who will stay here in the country,” noted Santiago Troya of the government socioeconomic development agency Fundación Ambiente y Sociedad to teleSUR English in February.[1] According to studies by the Ecuadorian Environment and Society Foundation, about 80 percent of all refugees within the country hope to become permanent residents.[2] Colombian refugees make up the biggest percentage of migrants that arrive in Ecuador. Colombia continues to top the UN High Commission of Refugees report of displaced people, exceeded only by Syria.[3] Ecuadorian authorities have reported 176,000 applications for refugee status for persons from Colombia from 1999 to June 2014; but the government has officially granted refugee status to only 60,500 of the asylum-seekers.[4]

Colombia’s long-running internal conflict, a triangulated war among guerrillas, paramilitaries, and government forces since the 1960s, has produced millions of internally displaced persons and refugees.[5] The ongoing violence is still a key generator of the high number of Colombians fleeing today, causing significant loss of labor and human capital from Colombia and a significant gain for Ecuador. The continuous violence and unrest sparked by guerillas, paramilitaries, and drug lords has driven many to flee not only to Ecuador but also to other neighboring countries, such as Venezuela and Peru.

The refugee flow into Ecuador is not a recent phenomenon; the country has been a central destination for a wide range of refugees and hopeful immigrants for much of the last century. Beginning with the rise of Nazism and the Holocaust in the 1930s and 1940s, Ecuador experienced a steady Jewish mass immigration. The low quotas set in the United States by Immigration Act of 1924 forced Jews to seek out destinations elsewhere than in the United States. From 1933 to 1943 about 2,700 Jews arrived, and by 1945 there were almost 3,000 new Jewish immigrants. Jewish immigration numbers in Ecuador markedly rose when Ecuador granted entry permits to Jewish refugees from Germany aboard the ship “Koenigstein” in 1939, while several South American countries refused them.[6]

Despite the relatively small Jewish population in Ecuador, these immigrants have achieved prominence in various fields including academics, industry, and science. Benno Wieser was an active Ecuadorian journalist and served as a diplomat in various Latin American countries. Jewish schools in Quito such as the Colegio Experimental Alberto Einstein and organizations for religious and cultural affairs such as the Asociación de Beneficencia Israelita have been established since the mid-1900s, cultivating a Jewish community for both younger and older generations. Easily able to sympathize with Colombian refugees and their difficult journey, the Hebrew Immigrant Aid Society (HIAS) has offered a helping hand. HIAS offers direct services to Colombian refugees in Ecuador and Venezuela to promote “self-sufficiency and integration” as well as resettlement services. In the first ten months of 2010, HIAS assisted nearly 45,000 Colombian, Venezuelan, Panamanian, and Argentinian refugees.[7]

What Makes Ecuador Such A Popular Refugee Destination?

For Colombian refugees in particular, Ecuador’s close proximity makes it especially attractive. Most come from the Colombian provinces of Putumayo, Nariño, Huila, Valle del Cauca, and Cundinamarca.[8] In addition to the convenience of a shared border with Colombia, Ecuador has recently made substantial efforts to provide adequate protection for those seeking refugee status. In February, Ecuador signed an agreement with the U.N. High Commissioner for Refugees to provide greater protection to transitory people.[9] Under 2008 reforms to Ecuador’s constitution, refugees have access to all the rights and responsibilities afforded to Ecuadorian citizens, including access to free health care, education, and other vital services aimed at improving their lives. After three years in the country, registered refugees may apply for citizenship. Since April 2009, the northern provinces of Ecuador have begun a new process for asylum seekers called registros ampliados, which has sped up the visa review process from taking months to just one day.[10]

These improvements came about with the substantial help from national and international organizations working with refugees, including the Norwegian Refugee Council. In spite of these attempts to improve refugee policies, however, there have been instances of the Ecuadorian government hardening its disposition towards refugees. President Rafael Correa’s Presidential Decree 1182, issued on May 30, 2012, regulated asylum procedures in Ecuador and required refugees to register with the authorities within 15 days of arrival in the country; this created backlash, especially from the aforementioned organizations. Perhaps partially in response to the advocacy of immigrant rights organizations, the Constitutional Court ruled that Decree 1182 violated the principle of equality enshrined in Ecuador’s Constitution. As a result, beginning last year, an amended decree extended time for registration from 15 days to three months. It also expanded the refugee definition to reflect the Cartagena Declaration, the overarching regional human rights instrument, to include “persons who have fled their country because their lives, safety or freedom have been threatened by generalized violence, foreign aggression, internal conflicts, massive violations of human rights or other circumstances which have seriously disturbed public order.”[11]

A survey conducted by the Journal of Immigrant and Minority Health of refugees and asylum seekers in 2014 reported that 92.2 percent (404 out of 438 respondents) did not intend to move back to Colombia. Some 9 percent intended to migrate to another destination in Ecuador. Another 12 percent had notions of migrating at some point to a third country, mostly the United States; Almost no one had a specific short-term plan.[12] [13] Their lack of interest in relocating again may stem from a desire to remain close to sources of assistance, as well as jobs and schools.

Colombian refugees may have escaped from life-threatening circumstances, but unfortunately, that is only half the journey. Upon arrival in Ecuador, they face another set of hardships, including assimilation, securing asylum status, and sometimes, enduring discrimination. A 2012 national survey by Beatriz Zepeda and Luis Verdesoto from the Facultad Latinoamericana de Ciencias Sociales (FLACSO) showed that about 64 percent of Ecuadorians said their opinions of Colombians living in Ecuador ranged from bad to very bad.[14] Other surveys of the host country’s people show that Colombians are the most negatively perceived nationality group in Ecuador, often associated with criminality, prostitution, and violence.[15]

The situation for women refugees in Ecuador is especially dire. According to the Women’s Federation of Sucumbios, sexual and gender-based violence is rampant and trafficking is commonplace in the border county of Lago Agrio.[16] Here, prostitution is a major legal industry and the town is full of brothels and prostitution bars, in which half the women who work there are Colombian.[17] Efforts to improve the terrible circumstances for women in Lago Agrio have mostly failed. A newly appointed female superintendent of police was assassinated when she tried to close several brothels that were [delete] engaging in the prostitution of minors. Another sad reality is that refugee and host community women experiencing gender-based violence, trafficking, and domestic violence have limited resources to recover or escape given the small number of women’s shelters. Lago Agrio is just one of many places in Ecuador that require more support and cooperation between the justice system and local government in order to achieve more hopeful conditions for vulnerable refugee women.

To discourage discrimination and promote equality and respect for refugees, the government conducts training workshops in both public and private institutions – National Police, Armed Forces, judicial authorities, ministries, media, and civil society groups, among others.[18] These efforts may have had some positive effect, but discrimination against Colombian refugees continues, as it often does for many refugees trying to assimilate in a host country.

Colombia’s Attempt to Win Back its Citizens

As Ecuador’s policies towards refugees have evolved, Colombia has made efforts to encourage its refugees to come back home. In 2011 and 2012, Colombian president Juan Manuel Santos initiated several programs for refugees to return, including the Colombian Victims and Land Restitution Law, which promises monetary compensation and land restoration for four million displaced Colombians.

This effort, however, has not enticed many Colombian refugees to return: according to a survey released by FLASCO in 2013, 84 percent reported no desire to do so.[19]

“I am not going to return to Colombia,” declared Rosa Gonzalez, a Colombian refugee, “especially not now while my children are young.”[20] She and her husband, Javier, continue to question whether Colombia is more interested in promoting a rosy image to the rest of the world rather than protecting its citizens.

Consistency In Both Theory and Practice

The issue of “crossing borders” usually draws attention to the U.S.-Mexico border, but equally important is the migration that takes place within Latin America. Ecuador has become a popular destination for refugees and internally displaced people not only from neighboring countries such as Colombia but also internationally, as seen with its relatively small but flourishing Jewish population.

Although Ecuador accepts more refugees than any other country in Latin America, the country at times backtracks on its traditionally generous immigration policy. The country has an obligation to sustain its 50,000 refugees with adequate attention, protection, services, healthcare, and education. If Ecuador is to open its arms to refugees, it ought to do so completely, not only through governmental procedures, but also as a society that seeks to eliminate discrimination and allocate more resources for these desperate persons.