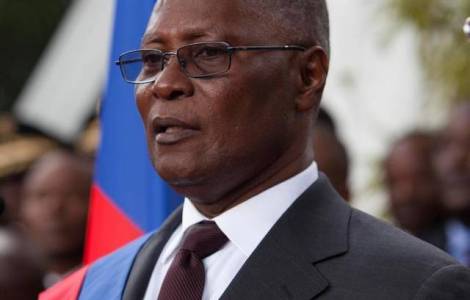 Haitian Interim President Jocelerme Privert’s 120-day mandate expired on June 14, as a result of Congress’ failure to decide on the potential extension of Privert’s term. The interim president was appointed earlier this year for a provisional mandate when former President Michel Martelly stepped down with no successor.[1] In October 2015, the first round of presidential elections declared Jovenel Moise, Martelly’s candidate, the winner; however, this round of elections was marred by unmanageable protests and violence due to mounting allegations of fraud by other candidates against the winner.[2] The elections were consequently declared null, and the Haitian Congress appointed Privert as a temporary mandate with the goal of assuring that new elections would be held. A second round of elections was scheduled to take place on April 24, and Haiti’s new president would be announced in May, but Privert’s administration failed to organize it due to lack of political will.[3] At present, the termination of Privert’s mandate introduces further challenges to Haiti’s current and future leadership status. The third round of elections, which are planned to take place along with Senate elections on October 9, are not likely to respect the deadline due to the lack of organization.

This failure of both Haiti’s Lower House and Senate to reach an agreement has left the country in a political limbo, as Haiti endures a difficult political crisis without a clear constitutional President able to form a consensus in the country. As of now, Privert, who is constitutionally required to organize new elections, has declared that he will not vacate the office until congressional representatives from both the Lower and the Higher houses meet again to reconsider extending his mandate. The unconstitutional Interim President officially stated that his main duty is to assure new election rounds on October 9, while unconstitutionally maintaining his interim presidency until that date.[4] While Privert’s allies agree to his extension and the arrangement of new elections, Privert’s opponents do not—as reflected in Haiti’s divided Congress.

The extensive process that has characterized the appointment of the head of the executive branch further reveals the failure of the international community to support Haiti’s electoral system, despite millions of dollars of foreign aid. Mrs. Sophie de Caen, Senior Country Director of United Nations Development Program (UNDP) in Haiti, and his Excellency Mr. Katsuyoshi Tamura, the Ambassador of Japan to Haiti, have signed two funding agreements worth a total of $8.4 million USD to support Haiti.[5] $4.5 million USD was contributed to reinforce an election fund already established by Haiti, the European Union, the United States, Canada, and Brazil. $3.9 million USD of aid “will go towards boosting the resilience of vulnerable groups through a UNDP-led risk and disaster management project that works at the national and local levels.”[6] U.S. institutions were also avid contributors, mainly the United States Agency for International Development (USAID) and the State Department, who donated more than $33 million USD. However, the funding failed to impact the electoral system as planned, due to a lack of oversight, poor allocation, and inefficient targeting of aid. This everlasting electoral turmoil raises doubts about the allocation of previous funds to support the Haitian electoral system, putting the effectiveness of international assistance to Haiti in question.

The current political environment in Haiti has not only brought about concerns within the country but also among its donor countries and international organizations, which may have ulterior motives for their concerns.[7] Recently, United Nations Secretary General Ban Ki-moon revealed his concern for the current uncertainty in Haiti. Similarly, the Secretary General of the Organization of American States (OAS), Luis Almagro, revealed his concern when he urged Haitian parliamentarians to fully assume their responsibilities by convening a National Assembly to decide on how best to guarantee institutional stability and the continuation of the elective process.[8] Like many leaders, they are fearful that the various political and socio-economic challenges facing the Caribbean country will amass into a much greater problem. This could prompt other nations to intervene in Haiti’s internal affairs.

In light of the recent occurrences, U.S. Ambassador to Haiti Peter Mulrean clarified the U.S. government’s stance on Haiti’s leadership, stating, “We need a full-time partner in the government of Haiti, and that means both a president and a parliament who we can work with to deal with immediate crises and get development off the ground again.”[9] Ambassador Mulrean’s statement echoes past U.S. interests in the region. Uncertainty in Haitian politics could mean uncertainty for U.S.-Haitian relations because of Haiti’s lack of clear leadership, which is potentially damaging to U.S. interests in the country. As the hegemon of the Western Hemisphere, the United States prioritizes focusing interests on influencing the governments in the region. If the U.S. government finds difficulty in defining Haiti’s leadership, relations with the Caribbean nation could be at risk.

The uncertainty that permeates Haiti’s political atmosphere undoubtedly transgresses its borders. Both in Haiti and abroad, many are left to question Haiti’s leadership status. While the U.S. government still recognizes Privert as the unconstitutional interim president, it is crucial to Haiti’s stability to have an agreed upon leader. Unfortunately, for the time being, the issue remains debatable and the unclear leadership in Haiti leaves the nation vulnerable to the possibility of intervention.