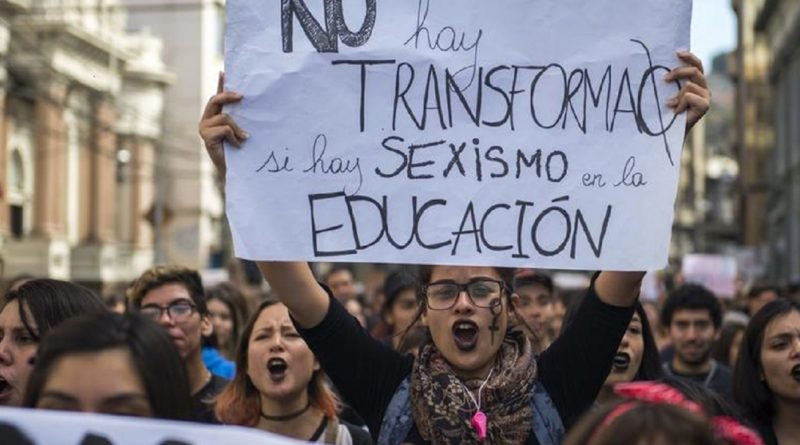 Just two months into his second presidential term, Sebastián Piñera’s government is facing a historic two-pronged protest that has shut down Santiago’s main universities as students and professors take to the streets demanding widespread educational reform. The first protest, which began in April, came as a response to the Constitutional Court’s decision to nullify a law that prevented for-profit companies from controlling universities. The second protest is an entirely new challenge for the Chilean government: female students at the Pontificia Universidad Católica de Chile (PUC) have staged sit-ins and demonstrations to challenge rampant sexism in the Chilean education system. Their movement has shut down the university for the third time in its history.

Student protests are not unusual in Chilean society, but protests of this proportion have not occured since the 2011-2013 movement that completely turned the Chilean education system on its head. During those years, which took place during Piñera’s first term (2010-2014), students, teachers, and other supporters demanded a widespread transformation of Chile’s public education system, calling for free, quality public education and increased government funding to override the unfair distribution of vouchers that monetize the education market. [i] The voucher system allowed the state to pay a fixed cost per child, which led to a “rigid segmentation of school children according to their social origin and stratification based on income levels.” [ii] Wealthier families were able to pay the difference and send their children to better private schools, leaving public schools underfunded and socioeconomically unequal. In response, students rose up to demand profound changes to this system of privatized public education.

While protesters threw rocks and set fires in the streets, the police fought back by arresting and firing at them with water cannons. [iii] Within two months, Piñera conceded to the students’ demands by offering increased education funds and scholarships, but students rejected these ambiguous proposals and continued protesting until Michelle Bachelet’s election in 2013, with the hopes that a fresh administration would comply appropriately with their demands. Bachelet immediately implemented a corporate tax to raise $5 billion in revenue for public education and promised to grant free public university education to 60% of the “most [economically] vulnerable” Chilean students in addition to scrapping the voucher system. [iv] She did not, however, formally end the privatization of education, leaving the original demands of the students largely unmet.

With Piñera back in power, the future of free public education is unclear. The first set of current protests is largely a continuation of the battle for increased access to schools and improved quality of education. On March 27, the Constitutional Court formally reversed a law that prohibited for-profit institutions from controlling higher education. Because the law’s many loopholes allowed corporations to profit from education, the total repeal comes as a massive blow to education activists. Sandra Beltrami, a student spokeswoman, explained, “We would prefer to be in the classroom…but unfortunately, we can’t do it with dignity because there continues to be profiteering (in education) in Chile.” [v] While Piñera intended to avert planned protests by increasing access to free technical education as part of the Gratuidad program, his conflicting attitude towards higher education hinders any large-scale decision-making. [vi] He promised to uphold the ban on profit-making in higher education, stating, “I want to take this opportunity to make it abundantly clear that free education is here to stay and that there will be no gain in university higher education,” but he also labeled the increased government education budget “imprudent and irresponsible.” [vii] As a result of his ambiguous and inconsistent stance towards providing free, quality education, protesters may stay mobilized for months, reflecting the precedent set by the 2011-2013 protests.

The second wave of protests taking Chile by storm is a never-before-seen conflict regarding sexual harassment and gender equality in higher education. For the third time in history, protesters staged a sit-in at PUC’s Casa Central (main administrative campus), and it is the first-ever “feminist takeover.” Protesters are condemning sexist practices in higher education, including the lack of punitive procedures for sexual abuse and harassment, after two professors were accused of “labor harassment and arbitrary discrimination” and “abuse of power and sexist violence,” respectively. [viii] Over 27 departments at PUC and Universidad de Chile joined the Santiago-based movement, but the protests spread throughout the country. In fact, the movement began at the Universidad Austral in Valdivia and made its way up to Temuco, Viña del Mar, Valparaíso, and Santiago as students began to publicly expose sexist mistreatment at their respective universities, public and private. [ix] Araceli Farías, Vice President of the Federation of Students at the Catholic University, explained that the movement shares the common goals of implementing “non-sexist education and ending sexual violence against women in educational spaces.” [x]

What makes this feminist protest distinct is not only its female leadership and fight for gender equality, but also its dominating presence in the public eye. Although the movement began at the Universidad Austral, the historic third takeover of the Casa Central brought the issues onto the national stage. The first takeover, for example, took place in 1967, when PUC students demanded the resignation of Rector Alfredo Silva Santiago in addition to a complete overhaul and liberalization of the administration. Both the Rector and Cardinal of the university resigned, and these high-profile departures paved the way for a dramatic restructuring of the university. [xi] In this current case, students wish to negotiate with Rector Ignacio Sánchez to establish rules and protocols for implementing reforms and freeing the university from sexist practices. [xii] The current public sit-ins, protests, marches, and vigils have attracted so much attention that former presidential candidate Beatriz Sánchez recently came out in favor of the protest, calling the takeover “historic” because it highlights that, in Chile, “the only way to make changes is like this,” referring to the provocative and highly-publicized demonstrations. [xiii] Because of the media coverage that the protest has attracted, as well as the responses it has provoked from universities, public officials, and the Chilean government, the issues highlighted by the protest will likely become major points of interest in Chilean higher education and the new Piñera administration. Although Piñera announced the new “Agenda Mujer” to promote equality, there are no specific amendments to sexism in education. [xiv]

So what is keeping Chilean students in the streets? Much like the 2011-2013 protests, the government has failed to provide any clear legislation or initiatives that satisfy student demands. Although Piñera may be avoiding any controversial decisions to protect his fledgling administration, empowered students are determined in their pursuit of free, quality, and non-sexist public education that provides opportunities and protections for students. Gerardo Varela, the current Minister of Education, declared “It’s not time for marches anymore,” but Chilean students will continue to prove him wrong. [xv]

Image: Protests have broken out at universities across Chile