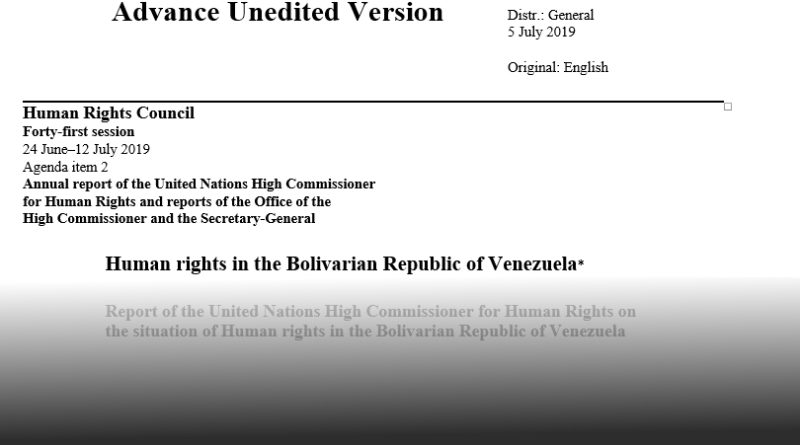 UN High Commissioner on Human Rights Michelle Bachelet’s report on Venezuela echoes the US government’s talking points, which are designed to terminate the two-decade-old Bolivarian Revolution in Venezuela. The report fails to acknowledge Venezuela’s manifest accomplishments or even recognize victims of US-backed right-wing violence in Venezuela. The US economic war against Venezuela, US threats of a “military option,” and opposition violence are treated in the Bachelet report as figments of the imagination, “alleged internal and external threats.”

Meanwhile, the US government brazenly brags on an official State Department website:

“The pressure campaign is working. The financial sanctions we have placed on the Venezuelan Government has forced it to begin becoming in default, both on sovereign and PDVSA, its oil company’s, debt. And what we are seeing…is a total economic collapse in Venezuela. So our policy is working, our strategy is working and we’re going to keep it on the Venezuelans.”

Reaction to the Bachelet report

The New York Times and the other usual cheerleaders for regime change in Venezuela predictably cheered the report, which came out a day before its scheduled July 5 release date.

The government of Venezuela, having been issued an advanced copy of the Bachelet report, immediately delivered a 70-point bill of particulars in rebuttal. Human rights organizations representing victims of the right-wing violence in Venezuela had met with Bachelet and provided documentation of abuses but their stories were omitted. This included the mother of an Afro-descendent son who had been caught in a passing opposition demonstration, doused with gasoline, and burned alive. Spain, however, just arrested a suspect in that crime who was hiding in Spain.

The day following issuance of the report, representatives of Russia, China, Turkey, Belarus, Myanmar, Iran, Cuba, Nicaragua, and Bolivia on the UN Human Rights Council  repudiated the Bachelet report. According to the Cuban representative, the report “represents a campaign to destabilize the democratic process.” The Nicaraguan representative at the Human Rights Council session condemned the unilateral and illegal measures imposed by the US that were egregiously ignored in the Bachelet report, adding these very measures have a “negative impact on the promotion and protection of human rights” in Venezuela. The Bolivian representative called for the cessation of the US unilateral coercive measures against Venezuela, which are causing great economic loss and misery for the people there.A little over a month prior to the issuance of the Bachelet report, the International Committee for Peace, Justice and Dignity launched a letter campaign to Ms. Bachelet and the Secretary General of the UN calling for the intervention by the High Commissioner to put an end to the US blockade has kept lifesaving medicines out of Venezuela. Bachelet did not respond to that request. The International Committee warns:

“It is extremely serious that the Bachelet report does not contribute to the dialogue for peace, instead it tilts the scales in favor of the aggressor while ignoring the damage the Empire has done to the people.”

UN special rapporteur Alfred de Zayas issued his report on Venezuela to the same UN Human Rights Council last September. He recommended that the US economic sanctions against Venezuela be investigated by the International Criminal Court as possible crimes against humanity. A former secretary of the Human Rights Council and a specialist in international law, de Zayas “believes his report has been ignored because it goes against the popular narrative that Venezuela needs regime change.”

In reference to the Bachelet report, de Zayas commented it “is fundamentally flawed and disappointing…a missed opportunity.” Noting that the “unprofessional” Bachelet report “gives scarce attention to the central problem – the financial blockade and sanctions that cause so much suffering and death,” de Zayas concludes: “Venezuela’s problems can all be solved, but first the criminal US sanctions must be lifted.”

Ricardo Arturo Salgado Bonilla is critical of Bachelet for not visiting his native Honduras, where the government is suppressing human rights. Even the Washington-aligned Human Rights Watch recognizes that “impunity for human rights abuses remain the norm” in the US client state of Honduras, which “has the highest murder rate in the world.” Bonilla observes that international agencies like the United Nations “have become colonial agencies at the service of the United States.”

The lead author of the human rights report, Michelle Bachelet, is a member of the Chilean Socialist Party and a pediatrician. Her father Alberto Bachelet was a Chilean general, who opposed the US-backed coup there in 1973. He was arrested shortly after the coup, tortured, and died while incarcerated. Before assuming the post of UN High Commission for Human Rights, Bachelet served twice as president of Chile (2006-2010 and 2014-2018) as part of the so-called Pink Tide of left leaning governments. Hers was arguably the palest of the pinkies. But given her pedigree, it is still jarring to see her carrying Trump’s water.

An insight into Bachelet’s ostensible about-face regarding US regime-change operations comes from Miguel d’Escoto, who was president of the UN General Assembly (2008-2009). After his term in office, d’Escoto described in an interview “all kinds of pressure tactics and arm-twisting” by powerful interests at the UN. His former deputy chief Sofía Clark added in reference to the US: “They have many other ways, insidious ways, of coming in and controlling sometimes the real autonomy of agencies here.”

Former secretary of the UN Human Rights Council de Zayas further explained, referring to Bachelet, “a high commissioner is not independent and is subject to political pressures.” Describing his own experience in the Human Rights Council, he related: “I endured pre mission, during mission and post mission mobbing.”

As Pasqualina Curcio Curcio recounts, the UN High Commissioner office has a history of reflecting the narrative dictated by the US. In 2011, then High Commissioner Navy Pally issued a report based on “patchy and hard to verify” information. The information turned out to be false and led to the military invasion in Libya under the excuse of a so-called humanitarian intervention.

Causes and consequences of the situation in Venezuela

With just three short paragraphs of the 16-page Bachelet report on the crippling US sanctions against Venezuela, the impact of the unilateral coercive measures is essentially dismissed, placing the onus on the Maduro government. Instead of calling for a cessation on the illegal and inhuman measures, the report tells the Venezuelans to “to adopt structural economic reforms” to adapt to the situation.

The Bachelet report finds “violations of the right to health resulted from the (Venezuelan) Government’s failure to fulfil its core obligations” but fails to recognize the impact of the US blockade preventing vital medicines from reaching Venezuela. The report similarly accuses the Venezuelan government of not ensuring the “right of food” without recognizing the elephant in the room – the US sanctions.

Prof. Steve Ellner of Venezuela’s University of the East paints a more balanced picture of the causes of the current situation in Venezuela:

“Five major explanations have been put forward: the unrelenting hostility of internal and external adversaries, leading to international sanctions and threats of military action; the plummeting of international oil prices, aggravated by the government’s failure to diversify production and sever dependency on petroleum; mistaken policies that discouraged private investments; the mismanagement and incompetence of the Maduro government; and socialism’s inherent contradictions and unsustainability.”

Dismissing the fifth explanation about the failure of socialism as simply ideological, he concludes like a good academician that all four of the remaining explanations have some degree of validity without teasing out the prime cause. Ellner adds that whatever the geometry of blame may be, the human rights solution in Venezuela must entail the immediate cessation of the US sanctions and regime-change activities.

Economists Mark Weisbrot of the Center for Economic and Policy Research and Jeffrey Sachs of Columbia University address the chicken-or-the-egg question of the role of US sanctions in Venezuela’s economic meltdown. Comparing, among other factors, the trajectory of oil production in Venezuela and Colombia pre- and post-sanctions, they conclusively demonstrate that the US measures, which they characterize as “collective punishment,” have been the decisive factor.

The Bachelet report takes the US government’s view of the impact of the sanctions: “The economy of Venezuela, particularly its oil industry and food production systems, were already in crisis before any sectoral sanctions were imposed.”

“People who claim tens of thousands of Venezuelans would be starving to death even without US economic warfare are like a lawyer arguing ‘Your honor my client did indeed shoot the victim, but I intend to convince the jury that he would have died anyway.’”

Ignoring the siege on Venezuela while reporting the reaction

Unlike the US and its allies, which recognize the self-proclaimed Juan Guaidó as president of Venezuela, the UN recognizes the government of President Nicolás Maduro as legitimate. Bachelet as an emissary of the UN, while hyper-critical of the Venezuelan institutions of state, met with the Venezuelan president, attorney general, ombudsman, and members of the Constituent Assembly, implicitly affirming their legitimacy. Bachelet also met with the US surrogate Guaidó, but only in his capacity as president of the National Assembly.

Venezuelan state actors have been responsible for human rights abuses as in any state. However, the government headed by Nicolás Maduro has itself arrested violators and adjudicates people for violations. The Bachelet report, while documenting instances of abuse, does not establish a systematic state policy of violations even with its flawed methodology of primarily relying on testimonies of persons outside of Venezuela.

The Venezuelan state is under siege by the US and its international allies and by the US-allied far-right domestic opposition in Venezuela, who call for a US military invasion of their own country. The Bachelet report by primarily condemning the Venezuelan state’s response to the siege, but rendering the siege itself virtually invisible, in effect provides justification for the US-backed regime change operation.

A more factual accounting of the current situation in Venezuela

A more factual accounting of the current situation in Venezuela than the Bachelet report would have included (cf. Task Force on the Americas):

“The time for dialogue is never over”

The deceiving human rights narrative of the UN report lends itself to a justification for trying to overthrow a sovereign state and its democratically elected government. Were the UN to genuinely promote a just solution to the current conflict, their human rights report should have promoted the following elements (cf. Venezuela Solidarity Campaign):

The Bachelet report, which one-sidedly only addresses what the Maduro government must do to rectify the situation, does not include dialogue among its concluding “recommendations.” However, Ms. Bachelet herself calls for a process of dialogue to resolve differences, which is key.

Four days after the issuance of the Bachelet report, Prime Minister of Barbados Mia Mottley stated that her government was ready to host dialogue efforts between the Venezuelan government and the opposition brokered by the government of Norway. In contrast to the US position and echoed by its surrogate Guaidó, the Caribbean leader said that “Barbados along with other CARICOM governments, have made it absolutely clear that the time for dialogue is never over and that as a zone of peace, we would want to see a very peaceful resolution to the problems in Venezuela.”

Roger D. Harris is on the board of the Task Force on the Americas, a 33-year-old human rights organization.