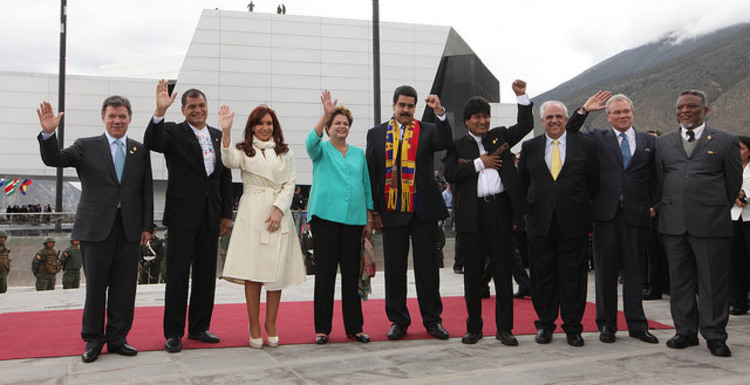 Led by Senators Robert Menendez and Marco Rubio, the U.S. Senate passed the Venezuela Defense of Human Rights and Civil Society Act on December 8. The House is expected to vote tonight on the bill. The new legislation hatched by the hard right wing of the Upper House will place targeted sanctions on Venezuelan officials “planning, facilitating, or perpetrating gross human rights violations against peaceful demonstrators, journalists, and other members of civil society in Venezuela.”[1] Such sanctions include travel restrictions and the freezing of assets of those found culpable of the offenses. On May 28, the U.S. House of Representatives approved a bill with similar sanctions against Venezuela, but at that time, former democratic Senator Mary Landrieu from Louisiana, fiercely opposed it.[2] Similarly, the White House did not support the measure, arguing that it could  jeopardize discussions between the government and the opposition.[3] Nonetheless, the State Department still imposed selected sanctions in the course of the past summer by issuing travel bans on Venezuelan officials accused of human rights violations.[4] It is possible that the Obama administration was also taking into account regional concerns about the possible destabilizing impact of such a measure on constitutional rule in Venezuela. According to the respected publication, Venezuelanalysis, the recent legislation has been met with strong opposition from “UNASUR, CARICOM, the OAS, the Movement of Non-Aligned Nations, the Venezuelan President, the Venezuelan National Assembly and Venezuelan public opinion.”[5]

This time around, the sanctions bill is officially backed by the White House.[6] So why sanctions now? The U.S. midterm elections have signaled a move to the right in the House and Senate, giving new hope to the ultra-right in Venezuela. Add to this mix a U.S. administration all too willing to placate the hardline opponents of Latin America’s pink tide in the State Department and the U.S. Congress. This penchant for interventionism, however, is not just characteristic of the Obama administration. From a geopolitical perspective, Washington has been bent on reversing the gains of the Bolivarian advance towards regional independence for more than a decade. At this week’s Union of South American Nations (UNASUR) conference, it was clear that the twelve member states are moving ever more rapidly towards complementary economic cooperation, universal citizenship, and labor rights within the Union.[7] These are not developments, however, that in any way threaten the people of the United States; but they do pose an opportunity for those seeking regional collaboration as mutually respectful partners.

The Obama administration has facilitated the adoption of a right-wing posture towards Venezuela because it has never consolidated itself behind a policy that could generate strong progressive support in the United States. Yet there are more moderate figures in the U.S. Congress, fourteen of whom signed a letter against a similar measure in May 2014, and there is a significant North American solidarity movement with the peoples of Latin America, who might have rallied to support a change of course in U.S. policy towards Venezuela and the region.[8]

Washington’s selective indignation at human rights abuses in Venezuela and the continuing flow of U.S. foreign aid to rogue regimes in Mexico and Honduras, belie the real crime of the Bolivarian revolution: its rejection of the Washington consensus and its regional leadership in constructing a new consensus built on Latin American integration and independence, promotion of a multi-polar world, and valuing social rights over profits. It is arguably on behalf of the restoration of some form of the neoliberal regime, and not for its love of humanity, that Washington has played a destabilizing role in Venezuela since the election of Hugo Chávez as President in 1998.

Those who are consistently concerned about human rights in Venezuela will give a hearing to both persons who have suffered at the hands of the security forces and to the Venezuelan Committee of Victims of the Guarimba (violent anti-government demonstrators). This Committee was received by Organization of American States (OAS) representative Miguel Ángel Trinidad on Tuesday in the Venezuelan state of Miranda. The survivors and relatives of loved ones murdered by ultra-right terrorists in Venezuela this year tell a story that does not appear to have entered into the political calculations behind the Senate’s sanctions bill. This information was also delivered in a detailed document to the embassies of the United States and Spain last week.[9]

To be sure, with regard to abuses committed by Venezuelan security forces, there is warranted criticism. In response to such abuses and citizen calls for justice, President Nicolas Maduro has ordered a shakeup in the policing bodies of the country. A number of arrests have been made in connection with the investigation of several homicides and cases of physical abuse by the police and Bolivarian National Guard committed during and after the demonstrations of the first quarter of the year, and the chiefs of some of the major policing bodies have been replaced.[10] Moreover, Maduro has set up a high-level commission under the direction of legislator Freddy Bernal, which includes citizen participation, to purge the various policing bodies of rogue elements, and revamp the police selection and training process.[11] Skeptics might call this window dressing. Supporters might applaud the effort. But the short-term effectiveness and long term institutional impact of these reform measures will only be known over the next few months and years.

There is good reason to believe that this latest U.S. Senate action might evoke a justified skepticism about U.S. intentions in the region. Menendez, applauding passage of his and Rubio’s bill said: “For too long, Venezuelans have faced state-sponsored violence at the hands of government security forces and watched their country’s judiciary become a tool of political repression.”[12] One may wonder if this “for too long” includes repression under the notoriously corrupt institutions of the fourth republic, which in February 1989 gunned down hundreds, if not several thousand protesters in the streets of Caracas who rose up against the impact of a neoliberal reform package imposed by the regime of Carlos Andrés Pérez. Also, if sanctions are a suitable tool for extracting the desired human rights behaviors, why not issue a similar call for such measures against Mexico? There still is very little progress in achieving justice for the 43 disappeared students, let alone the thousands who have been murdered as collateral damage in the past four or five years in the merciless drug war. Why not impose such measures against the regime in Honduras, which has the world’s highest homicide rate and an extreme level of impunity for murder by the state, or against Paraguay for its murderous assaults on the freedom of the press?[13] These nations continue to receive U.S. security assistance.

Even limited sanctions will lack moral validity within Venezuela without popular support.[14] Such measures, however targeted, arguably hit a sore spot in the national Venezuelan psyche (referring here, to the majority) because they are likely perceived as challenging Venezuelan sovereignty. President Maduro responded to the U.S. Senate action on Tuesday, invoking powerful themes of national discourse:

This is not empty rhetoric but articulates some of the symbolism and culture of the nation. Surveys and focus groups conducted this year by the Venezuelan think tank, Hinterlaces, indicate that the large majority of Venezuelans opposed the salida ya strategy and support constitutional means of deciding political contests.[16]

For all of the above reasons legislation that would impose sanctions on Venezuela represents a wrong turn when it comes to regional diplomacy and ought not be signed into law. The Senate, which was elected by the citizens of the United States, would be more effective in addressing constituent concerns about human rights perhaps by focusing on the streets of Ferguson, New York City, Cleveland, Los Angeles, and Orlando, rather than Caracas. For too long, many of the United States’ own citizens, in particular African Americans and Latinos, have faced violence and death at the hands of rogue police with impunity and have suffered discrimination under what Michelle Alexander has called the “New Jim Crow” features of the criminal justice system.[17] Also, as the Senate has been displaying its indignation at the behavior in Caracas, the same body, to its credit, issued a report on crimes committed by the CIA during the administration of President George W. Bush (2001-2009). Raising such issues in the present context is no red herring because the employment of a double standard on human rights is directly relevant to the political impact of the upper house’s action.

President Obama’s administration, from the beginning of his presidency, has declined to use its diplomatic means to improve ties and mend the frosty links with Venezuela; instead it has turned all of its mind to deploying threats and soft power against Caracas. Today, Venezuela is grappling with serious economic challenges. It is also a nation at peace with its neighbors; it plays a leadership role in several regional associations; and is making an important contribution to the ongoing peace talks between the FARC and the government of Colombia. It is up to the people of Venezuela, not foreign intervention, to evaluate the performance of President Maduro and determine, through democratic procedures, how long Chavistas hold public office. Rather than sanctions, the Obama administration has plenty of justification to attempt a resumption of diplomatic relations with Caracas. By instigating a further alienation between the two countries, the United States is essentially alienating the rest of the hemisphere too and will, as a result, soon see how its influence in Latin America is withering away, beginning with benign neglect and ending up as toxic diplomacy.[18]

Frederick B. Mills is Professor of Philosophy at Bowie State University.

[16] Hinterlaces official website. Accessed on Dec. 10, 2014: http://www.hinterlaces.com/ See “Analysis Situacional” Dec. 7, 2014. In this video, Oscar Schemel, President of Hinterlaces includes an analysis of the impact of 15 years of Chavismo on Venezuelan culture and symbols.

[18] Interview conducted with Director Larry Birns from Council on Hemispheric Affairs on Dec. 9, 2014.