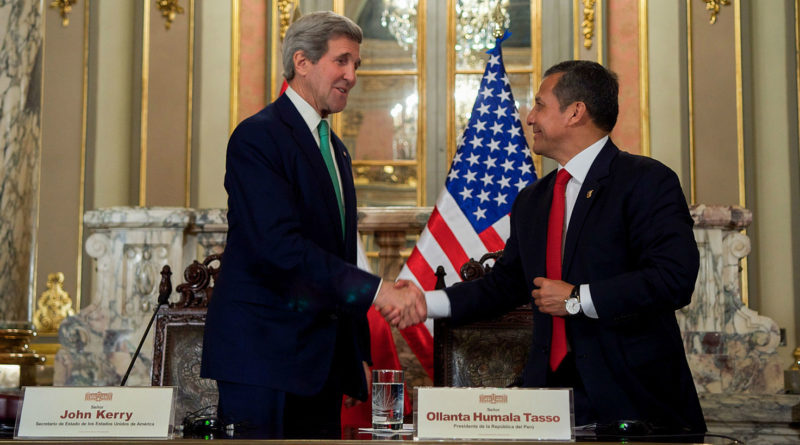 Protestors in Lima, Peru demonstrated in March against the anticipated arrival of the USS George Washington, a nuclear-powered aircraft carrier that will spend several days in port at Callao as it returns from Asian and Australian waters, as well as other U.S. military that have arrived to assist Peru’s military assets with anti-drug activities. Some anti-drug activists, like Raul Ramos, claim that U.S. “plans are mainly to maintain U.S. hegemony and its control over our natural resources, as it always pointed out that we are their backyard.”[1] Opposition to the increasing presence of U.S. troops in Latin America demonstrates the complicated nature of the war on drug traffickers and of the domestic politics of a number of Latin American countries and the United States.

For more than sixteen years U.S. policy toward drug production and drug trafficking in Latin America has focused on a militarized response. In the late 1990s when Colombian President Andrés Pastrana sought assistance for a strategy to combat the FARC (Revolutionary Armed Forces of Colombia) and its involvement in the growth and production of cocaine, the administration of U.S. President Bill Clinton took on the initiative to push for an emphasis on a militarized strategy. Plan Colombia, as it was called, brought increasing amounts of U.S. military aid to the theater. The United States has claimed success, and a United Nations report has shown coca production has been reduced by about 50 percent in Colombia.[2]

Both the George W. Bush and Barack Obama administrations have continued with the basic premise that a military response is necessary when combating drug trafficking, and this had led to some opposition by those who feel that the military approach has brought on increasing violence, ignores many of the other social and political problems, and gives too much power to the military. “Despite overwhelming evidence of continued failure to protect human rights the State Department has continued to certify Colombia as fit to receive aid. In effect, the U.S. has continued a policy of throwing ‘fuel on the fire’ of already widespread human rights violations, collusion with illegal paramilitary groups and near total impunity,” states an Amnesty International report.[3]

Faced with increasingly violent and powerful drug cartels operating in Central America and a resurgence of the Peruvian Shining Path guerilla movement that draws continued revenue from drug sales, the U.S. has increased its military presence in Latin America. “In the last few years, the U.S. has been ramping up its military operations throughout Latin America in what the AP called ‘the most expensive initiative in Latin America since the Cold War.’ The buildup has cost U.S. taxpayers more than $20 billion since 2002, for troops, ships, clandestine bases, radar, military and police training and other expenses,” wrote Dana Frank in the Los Angeles Times in 2013.[4]

The United States has stationed several hundred troops at the Soto Cano military base in Honduras. Although the Honduran constitution does not permit foreign troops on its soil, the Joint Task Force-Bravo is considered to be a temporary deployment for an indefinite period. The purpose of the base with transport helicopters was ostensibly to assist with rescue operations after natural disasters, and also to interdict drugs. However, the presence of U.S. military may have an impact on domestic politics. During the interrupted presidency of Manuel Zalaya (2006-2009) the U.S. became alarmed at his ties with Hugo Chávez and leftist elements in Latin America, and Zelaya was removed from office by the nation’s Supreme Court in what some international observers called a manipulated coup. The succeeding administration of President Porfirio Lobo included some of the Honduran officers who had helped overthrow Zelaya and have abused human rights within the country.[5] There is no evidence to suggest that the presence of U.S. military in Honduras has increased the safety or security of Hondurans, and if anything, Honduras has continued to skid into being one of the worst human rights violators in the Hemisphere, with over 40 of its journalists being gunned down in recent run-ins.

The increasing presence of U.S. military in Peru is also controversial, and seems to conform to a coincidence of goals of U.S. and Latin American administrations. Just as the governments of Colombia and Honduras benefitted from military aid, equipment, training and ground troops, Peruvian President Ollanta Humala is hoping for assistance in fighting a resurgence of the Shining Path and coca production just as his political influence has diminished. In March, the presidentially appointed prime minister, Ana Jara, was censored by Congress and forced to resign. Humala, with an estimated approval rating of barely 25 percent has been challenged by the opposition in Congress, many of them still being loyal to the ex-president Alberto Fujimori and his daughter, Keiko Fujimori, who was defeated by Humala for the presidency. The Peruvian government is building a large army base on eastern edge of the Apurimac and Ene River Valley, where increasing coca production has become a problem. In addition, Humala is facing a resurgence of the Shining Path guerillas, and the guerilla group appears to be obtaining funds though the cultivation of coca. Hoping to shore up his reputation, Humala is presently seeking assistance from the U.S. for training and counter-terrorism.

Many Peruvians are worried about increasing numbers of U.S. troops in Peru. “Peruvian academician and drug policy expert Roberto Soberon insists the United States intends to ‘retake the initiative in South America and implement a more visible military presence in the Andes and Western Pacific always taking into account open and covert actions developing in Venezuela and other countries that distance themselves from Washington.’”[6]

Clearly, coca production in Colombia, drug cartels in Central America and a resurgence of the Shining Path with its connection to drug money should be of some concern to Latin Americans and to the United States. The extent to which the U.S. considers Plan Colombia to have been relatively successful and a model for future responses throughout the region will influence the number of U.S. military personnel and the scope of activities. However, the militarization of the response to coca production should be looked at with is dangerous. It encourages increased violence that often damages local populations and can lead to human rights abuses. It also ignores the multiplicity of issues, such as poverty, lack of alternative crops with market value, lack of infrastructure and inability of local populations to influence the national government effectively. There are alternatives to a strictly military response. In Peru, for example, the International and Ibero-American Foundation for Administration of Public Policies (FIIAPP), a Spanish Public International Cooperation Entity is currently training Peruvians in an anti-drug program financed by the European Union for six million euros. The training involves several Peruvian agencies in surveillance and tailing techniques and seeks to foster inter-agency cooperation. By themselves, such programs are not sufficient to halt coca production or armed insurgencies. However, they make the effort more international and less U.S. dominated and encourage the reduction of dependence on military activities. The Colombian government, for example, despite opposition from the U.S. government, halted aerial coca eradication programs that use the herbicide glyphosate, claiming that the chemical may be carcinogenic to humans. Peru is still working with the E.U. in anti-narcotics training. These are signs that Latin American policymakers are hoping to combat the drug problem without undue dominance by the U.S. through its military.

[3] Accessed on June 30 at http://www.amnestyusa.org/our-work/countries/americas/colombia/us-policy-in-colombia