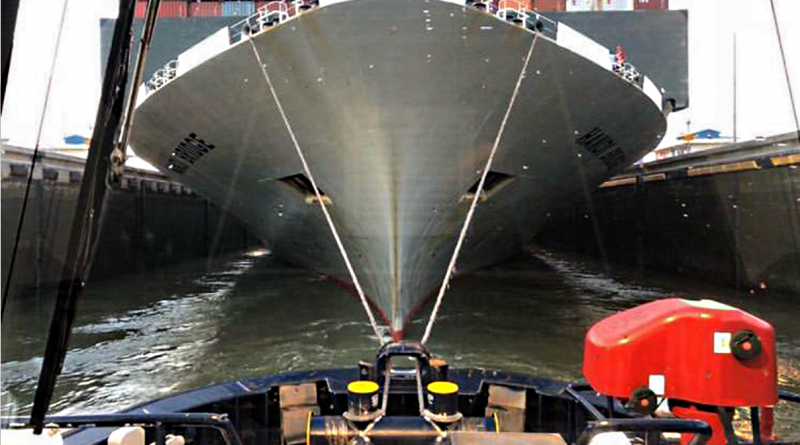 From his office on the jungled banks of the Panama Canal, the leader and Secretary General of the tugboat captain’s union is a short, muscular, bald man in his early forties. “We keep running into the same trouble,” says Iván de la Guardia. “Fatigue, from the excessive work hours we have been forced to work. We are forced to work overtime [at time and a half pay] because we don’t have enough guys to run both the old Canal and the new Canal. If we worked an eight hour day, the Panama Canal would stop.”

The Panama Canal Authority, which declined to comment for this article, completed a five billion dollar expansion in 2016, introducing a new set of locks, adding a new, wider sea lane able to haul twice as many supertankers between the Atlantic and the Pacific as before.

But instead of hiring extra personnel needed to meet the increased workload, the Panama Canal simply doubled-down on the workload for existing employees, stretching them past the brink of exhaustion, and creating a deadly climate of fatigue embedded in a labor struggle on the isthmus.

The main difference between the old and new Canals is an important technical one: the old Canal uses a pair of locomotives to pull the ships from along the shore, with tugboats used for entryway assistance only. The “new” Canal replaces those locomotives with tugboats entirely, with one or more small craft tied to each end—bow and stern—of the passing vessel.

The problem: “There is an overcharge on the workload,” says de la Guardia. “We have the same number of guys working the old Canal as we do working both the new Canal and the old Canal. Last week a guy worked 48 hours straight. Before that the record was 35 [straight hours]. And that’s what we’re getting with this new program. If you work overtime without consent that’s forced labor under ILO conventions. But if you say to the guy above you that you’re tired, you can get slapped with charges or fired. Guys get scared.”

A younger captain, in his late-twenties, added: “There is definitely a culture of intimidation here,” said Rodrigo Fuerte. “We have 11 guys on the verge of getting fired just for speaking out.”

The Panama Canal last year initiated a manpower shortage by removing a key member of a tug boat’s crew known as the “second captain,” or third mate. [1] “We have been asking for years: when are you going to hire new people?” said de la Guardia. “Then in April they did the opposite: They changed the crew of the tugboats without telling us—we would normally have three seamen; and they reduced it to two. It’s like being an airline pilot and getting told, ‘sorry, there’s no more co-pilot’. The only way we could avoid getting killed by falling asleep was with that second captain.”

Then, one day in April, tugboat captains staged a protest:  a work-stoppage protesting the removal of the second captain, freezing traffic at the Panama Canal.

Participants were swiftly sanctioned as order was restored. According to a statement issued by the Panama Canal Authority, reprimands were “based on the fact that these captains of tugboats refused to fulfill their duty to assist the transit of vessels through the neopanamax locks, which affected the regular operation and caused a negative economic impact for the country as it affected the confidence of our clients and in the image of the Panama Canal.” [ii]

The implicit message: accept the deteriorating, increasingly dangerous conditions of the Canal, or face harsh discipline.

Because the Canal is officially considered internal waters of Panama, it is not highly regulated by the International Maritime Organization—the London regulatory body who deliberates in secret meetings which journalists are forbidden to cover, according to the London Economist. [iii]

Panama has not ratified a number of International Labor  Organization (ILO) conventions,[iv] such as those protecting collective bargaining rights, or enforcing basic occupational safety and health conventions for seafaring work. Furthermore, the majority of ships passing through the Canal are registered in places like Liberia, Panama, or the Marshall Islands[v], allowing shippers from across the globe to skirt basic safety standards for their crews while dodging taxes. [vi]

Tugboat captains certainly face degrading conditions. With no more second captain available to take the wheel, for one, it is no longer a possibility for pilots to eat or use the bathroom during multi-hour transits. The Canal’s narrow walls offer a razor-thin margin for error. Some captains refrain from drinking water altogether prior to transit; others bring with them a bottle in which to urinate. Any flinch at the controls could cause a catastrophic leak or spill.

At the end of an eight-hour day, it’s common for a tug boat captain to receive a call on his radio asking that he perform yet another mega-ship transit, perhaps forty miles away, starting at the opposite end of the Panama Canal, in Colón.

“Just waiting for transport to take you to the other end of the Canal can take up to two hours,” complained Rodrigo Fuerte. “But you’re afraid to say ‘no, my shift is over,’ even if it’s past midnight and you’re exhausted.”

These undermanned crews have already proven dangerous. In November 2017, a veteran deck hand, Osvaldo de la Espada, got killed when a rope fell into the ocean, getting caught underneath a ship’s propeller. It snapped and recoiled, striking Osvaldo fatally in the head.

“That accident never would have happened had they not pulled our second captain,” maintains de la Guardia.

“The way we do it: There’s a guy manning the winch. But since they pulled a seamen from our crews, that guy on the winch is now gone,” he explains. “We go into the flare of the ship and the tugboats have to get in there to get the line to go up and down. The guy is working out there—in the black, at night, under the rain. Without that extra guy looking up, you cannot see the line handler, who had the role of looking at the guy on the winch, communicating. Since they pulled the third seaman, we’ve lost that guy.”

By this captain’s calculation: “An LNG [liquid natural gas] ship pays an average of half a million dollars in tolls. Many ships: $1.2 million. Do you know how much it costs to have that crucial [third] seaman? 40 bucks” [U.S., per hour], says de la Guardia. “They are just fucking with safety.”

If you fall asleep, even for a second, he adds, you risk going outside the channel and sinking the tug, or causing an accident after missing a pilot order.

Last year, a tugboat captain fell asleep at the wheel, and with no second captain on board to wake him, his tugboat went careening out of control, smashing into the U.S. Coast Guard ship, “Tampa”. [vii]

This being an international incident, the NTSB (National Transportation and Safety Board) sent supervisory investigator Barry Strauch to confirm the cause: fatigue-inducing work schedules.

In the summer of 2018 the International Transport Workers Federation commissioned Strauch to investigate working conditions on the Panama Canal with an eye on tug boat operations. (Strauch is something of an expert witness-for-hire around Washington D.C.; a paid lobbyist for sectors within the transportation industry.) In his 30-year career with the NTSB, he has investigated America’s most horrific maritime, aviation and train wrecks. His 177-page report on the Panama Canal, co-authored with a local occupational medicine specialist, Dr. Isabel Gonzalez, is called “The fatigue of the captains: an imminent catastrophe.” [viii]

Strauch surmised, that, “In effect, ACP [the Panama Canal Authority] has increased the likelihood of captain errors by maintaining fatigue-inducing schedules, and then it increased the likelihood that the resultant errors would lead to catastrophic accidents by removing the one element that could reduce the likelihood of captain errors from becoming accidents, the second captain . . . risking the continued economic viability of [The Canal], let alone the lives of those who work in or live near the Canal.”

Over the phone from his office in Virginia, Strauch warns of a looming storm: “The combination of fatigue from excessive forced overtime, fueled by the removal of the second captain, the round-the-clock transport of hazardous cargo, including nuclear material and highly-combustible liquid petroleum gas—-and all of it being in a dense population zone [Panama City], work together to increase the likelihood of a catastrophic accident.”

“Remember: safety really means money, on both sides,” Strauch says. “There is always a trade-off.”

The study showed that tugboat captains working the extended new schedules had seen sharp increases in divorce rates, obesity, diabetes, hypertension, heart problems and chronic insomnia— inducing a series of automobile accidents when tugboat captains fell asleep at the wheels of their cars driving to and from work.

The question is: why? To save a few bucks? Ivan de la Guardia claims that the Canal has been aiming to “eliminate unions and privatize operations, piece by piece, starting with the janitors and working their way up.” He adds: “Who are they going to replace us with? They’ve tried dumping in people from Nicaragua, Venezuela, many of whom couldn’t take basic orders because they didn’t even speak English,” [the official language spoken at the Canal.] “I know we are not astronauts, but we are all graduates of maritime academies. Do you know how long it takes to make a deck-hand? Or an engineer? Two years.”

According to the 25-year Canal veteran, “Quijano [the Canal’s current president] is driving the Panama Canal into a ditch. A ditch within a ditch…..At least when the Americans ran the Canal as a government agency, safety was a priority. Now it’s all about ‘efficiency’—and that means moving the most ships at the lowest possible cost.

Passing out photocopies of the Canal’s vexing new management tree, the young captain Rodrigo Fuerte notes: “In October there was a reorganization of the Canal. Now it is run by seven or eight vice presidencies. They changed in composition and name. The new name implies sacrificing other things, like safety.” He added, ominously: “But it looks like it’s going to take a catastrophic accident before anyone pays attention.”

The interviews in this article were conducted by the author in Panama City, Panama, between January 3rd, 2019 and March 18th, 2019.

Nash Landesman is a writer and researcher.