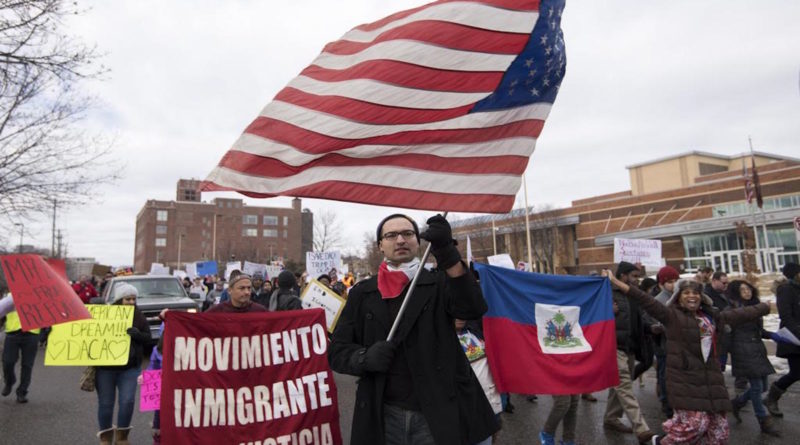 By Dominic Ferrera, Research Associate at the Council on Hemispheric Affairs

Throughout the first year of his presidency, much of Donald Trump’s immigration policy has been heavily influenced by his own personal perceptions of the countries which its bruised migrants are coming from. This mindset has been exemplified in the Trump administration’s self-serving decision to end Temporary Protection Status for migrants from El Salvador, Nicaragua, Haiti and 211 other countries at whose hands they have suffered. Furthermore, on January 11 President Trump seemed to reveal the motivation behind such decisions when he labeled Haiti, El Salvador, and other countries in Africa as “shithole countries.”[i] In comments to NBC news, a White House spokesperson framed the matter as an attempt by the President to “emphasize his support for a merit-based immigration system.”[ii] Regardless of if that is true, the wording of Trump’s statement does nothing but reinforce an immigration policy based on race rather than merit. During the same meeting, the President also made the suggestion that the United States should allow more immigrants from Norway.

President Trump is also using DACA (Deferred Action for Childhood Arrivals) as leverage to pressure the Democrats into expediting legislation that would block funding for his proposed border wall, a longstanding campaign promise of his. In exchange for roughly $18 billion in funding for the wall, the President would leave DACA to Congress to decide its fate. Trump stated on January 9 that they would prepared to sign anything that was put on his desk so long as it would also include funding for his wall[iii]. March 5 will signal the beginning of the end for DACA beneficiaries as they will gradually lose their protection after this date; unless the government reverses its decision and enacts DACA protections into law.

By holding DACA as collateral President Trump is making a concerted effort to push through funding for his border wall. He is willing to concede extended protections under DACA, and he is willing to “take the heat” from his base as long as he is able to pass funding for the wall[iv]. Trump is willing to budge on his traditionally strict immigration policy because he is trying to make good on his campaign promises, and sees the wall as one of his major political priorities. The President has also stated that the wall is necessary for national security purposes.

The attacks that Trump has made on DACA are a political decision. DACA beneficiaries were not brought to the United States of their own volition. These are people who were brought to the States at a young age because of their parents choices. These immigrants have formed productive lives and relationships in the United States. Removal of DACA protections would jeopardize the future of around 800,000 of the most promising, hard-working and civically upstanding immigrants in the United States[v]. To uproot all of these people is too cold and calculated to be a viable solution for such a sensitive issue. It would be more useful to think of these people as an integral part of     U. S. society. Those immigrants who have committed no crimes now face the threat of deportation as though they had committed one. If President Trump truly had an issue with illegal immigration, he would have also promised to deport illegal immigrants from our northern counterpart, Canada. In 2017 there were approximately 100,000 Canadians who were living in the United States illegally. Yet Trump has made no mention of cracking down on individuals from that country[vi]. When the President mentions illegal immigration it is usually Latin America, or “shithole countries” that he is referring to. Granted, the United States and Canada share a stronger relationship than that of the U.S. and Mexico, but why not focus on improving on the relationship with Mexico? Good relations and strong bilateral policy would go a long way to improve immigration policy between the two countries.

By Dominic Ferrera, Research Associate at the Council on Hemispheric Affairs