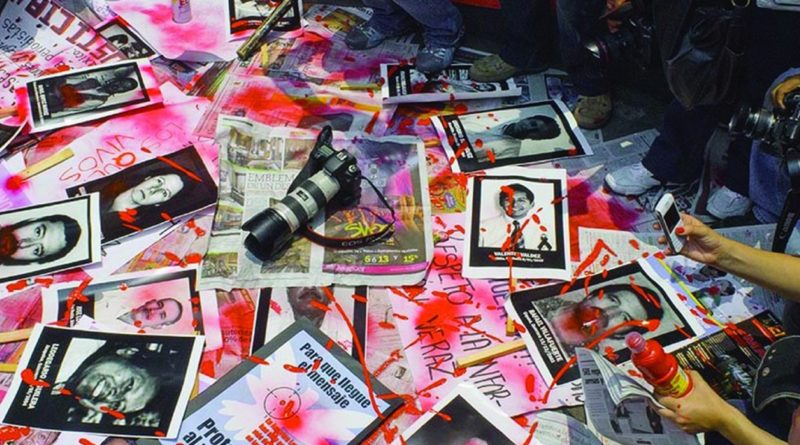 On May 29, 2018 Hector Gonzalez Antonio was found beaten to death on a street in Ciudad Victoria, Tamaulipas. He was writing for Excelsior, one of Mexico’s largest and most widely read popular national newspapers. On May 24, 2018 Alicia Diaz Gonzalez was found dead in her home, “on the floor, face down, in a pool of blood, having suffered a number of blows.” [i] She was an economic reporter from Nuevo Leon who had worked for El Financiero since January of this year. On May 15, 2018 Juan Carlos Huerta was shot while driving in Villahermosa, Tabasco, coincidentally on the 1-year anniversary of the death of a fellow journalist, Javier Valdez. [ii] Huerta was a radio journalist for Sin Reservas. Gonzalez Antonio, Diaz Gonzalez, and Huerta are three of the six journalists who have been assassinated in Mexico since the beginning of 2018, along with Leobardo Vazquez Atzin, Leslie Ann Pamela Montenegro, and Carlos Dominguez. Eleven journalists in total were killed in Mexico in 2017; by comparison, war-ravaged Syria had 12 journalists murdered in the same timeframe. In only five months, the 2018 body count is over half of last year’s. [iii] Drug cartels have increased their violent intimidation of Mexico’s journalists, and the government has proven unable to punish the offenders.

Journalists face more danger in Mexico than in the rest of the developing world. According to The Committee to Protect Journalists (CPJ), Mexico is one of the most dangerous countries in the Western Hemisphere for journalism. [iv] Mexico ended 2017 with 12 out of 65 total journalists murdered worldwide—the highest number in its history. [v] Mexico is currently ranked 148th out of 180 countries in Reporters Without Borders’ (RSF) 2018 Freedom of Press Index. [vi] Gruesome stories of Mexican journalists killed by organized criminal syndicates, although always tragic, have become somewhat of a cliche. In his 2012 book Oficio de muerte: Periodistas asesinados en el país de la impunidad, journalist Carlos Moncado Ochoa recalls that “Lo que no ha variado son las declaraciones de los funcionarios: todo el peso de la ley…Este crimen no quedará impune.” (What has not changed are the declarations of officials: the full weight of the law). Additionally, “el recuento comienza en 1860 y concluye, por desgracia provisionalmente, hasta nuestros días” (the count starts in 1860 and concludes, unfortunately, until today). [vii]  Mexico’s growing numbers are endemic of a complex, long-term problem with  roots that trace back to Partido Revolucionario Institucional (PRI) dominance. Although, comparatively, there was more freedom of the press under the PRI, the level of violence today has greatly escalated. Furthermore, since the beginning of its ongoing War on Drugs, Mexico has become “the most dangerous place to be a reporter in the Western Hemisphere.” [viii]

The inextricable link between the media and drug traffickers puts journalists at great risk, as controlling the flow of information has become another deadly dimension of Mexico’s Drug War. The rise in violence practiced towards Mexican journalists has come as a direct consequence of the war against drug syndicates. In the past, drug lords relished media reports of their treacherous activities, seeing the publicity as another method for intimidating their rivals. However, after 2000, “criminal organizations began to pressure the media to omit stories about their activities while at the same time publishing incriminating stories about their enemies and exposing corrupt government officials working for their competitors.” This strategy effectively gave the traffickers control over certain geographic “Plazas” (trade-routes) and the “independent” media. [ix] Criminal organizations have thus begun using the media like traditional political parties do, utilizing news outlets to discredit their rivals and defend themselves from allegations. Like corrupt politicians desperate to avoid damaging exposure, cartels are willing “to use deadly means to attain their public relations goals.” [x]

The cartels’ violent intimidation tactics force journalists to cooperate with the drug lords in order to survive. Cooptation between news outlets and cartels is a familiar practice. Dating back to the PRI era, “self-censorship and outside editorial control were common, and many journalists were already accustomed to doing business in this way.” Additionally, media owners often had ties to government leaders and heavily depended on public advertising revenue. [xi] Journalists are still very susceptible to bribes, especially local journalists (considering their low pay) with few economic resources to relocate or change careers when facing serious pressure or threats from cartels. Of course, not all journalists choose to accept bribes. Yet, those journalists who work against the drug cartels face enormous danger. Self-censorship and printing without bylines are other measures of protection, “editors and reporters frequently decide that the cost of publishing certain stories is simply not worth the potential benefits.” [xii] In an interview with the Frontline Club, writer Sandra Rodriguez Gómez remarked that while working as a crime reporter for El Diario de Juárez death became part of everyday life for coworkers, “We started to share our last wills: ‘If I get killed, don’t let anybody open my coffin’.” [xiii] As a result of self-censorship, social media users have tried to fill in that gap, for example “El Blog del Narco.” Not surprisingly, “the fate of those who use social media to report the activities of criminal groups is not unlike those of professional journalists reporting for traditional outlets.” [xiv] Leslie Ann Pamela Montenegro was a Youtuber who used the persona “Nana Pelucas.” Montenegro “used a big wig and glasses to deliver chatty commentary and criticisms.” According to the state prosecutor, Montenegro was murdered by the Cartel of Acapulco for revealing inside information in one of her videos. [xv]

Systemic impunity and corruption support the environment of insecurity that many journalists are forced to navigate. According to the Wilson Center’s Mexico Institute, “complicity between police and drug gangs is so common that it routinely undermines justice and creates the widespread perception that the system is controlled by the criminals.” [xvi]  This view is reasonable considering the mediocre measures that the Mexican government has put in place have produced inadequate results. Even when politicians have attempted to curb the cartels, their efforts have proven ineffectual. Fiscalía Especial para la Atención de Delitos cometidos contra la Libertad de Expresión (FEADLE) is a special prosecutor in the Attorney General’s Office with jurisdiction over crimes related to free speech and expression. [xvii] Unfortunately, FEADLE lacks an independent budget, resources, and a concrete criteria for determining jurisdiction and protocol. As a result, FEADLE has only successfully prosecuted one case between 2006 and 2010. [xviii]  Likewise, in response to public outcry, an amendment to Article 73, section 21 of the Mexican Constitution was passed in 2012, granting “federal authorities the power to investigate and try crimes against journalists, persons, and property intended to limit or undermine the freedom of expression and information, and marks an important step forward for Mexico” and allows federal authorities to take cases under state jurisdiction. Unfortunately, “secondary legislation is needed to ensure that federal law enforcement agencies have the resources and training necessary to effectively investigate and try crimes against freedom of expression.” [xix] The Ley para la Protección de Personas Defensoras de Derechos Humanos y Periodistas is another means to “protect human rights defenders and journalists who suffer aggressions because of their work” and has established various protection mechanisms. [xx] Although, likewise, the law has suffered from the same shortcoming as the constitutional amendment. Overall, the Mexican government currently lacks both the organization and the means to successfully curb drug cartels’ violence against journalists.

The threat to journalists and free, honest press in Mexico will persist until there is concrete institutional change. “Mexico is at war in many important aspects, with institutions corrupted and security compromised, but the front-line journalism that would allow its citizens and leaders to understand and combat its enemies is nearing extinction.” [xxi] Journalists play a crucial role in the battle for the free flow of information, which has reached a crucial phase. Dismally, “unless the Mexican government takes bold action, the narcos will continue to define what is news and what is not” and brave journalists will walk a dangerously thin line when reporting on criminal activities. [xxii] The death of a journalist cannot remain a Mexican cliche. We cannot keep reading the same headline and continue to accept this horrendous violence as the natural consequence for fearlessly speaking out.