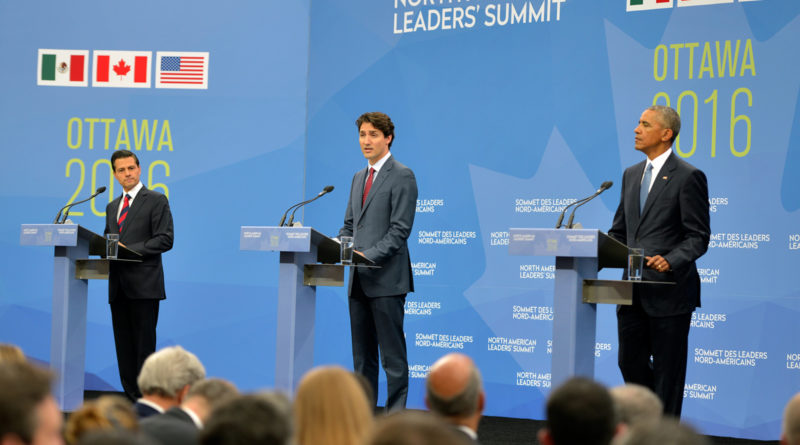 On June 29, Mexican President Enrique Peña Nieto and U.S. President Barack Obama joined Canadian Prime Minister Justin Trudeau in Ottawa, Canada for the 2016 North American Leaders’ Summit. In 2014, the North American and Mexican leaders last united for this summit in Toluca, Mexico, while Stephen Harper was Canada’s head of government.[1] This year, Prime Minister Justin Trudeau hosted and attended his first North American Leaders’ Summit while President Obama attended his last, as his presidency comes to an end. The summit offered Prime Minister Trudeau an opportunity to mend Canada’s diplomatic relations with Mexico—formerly threatened by Canada’s previous policies towards its visa requirement for Mexican visitors. Additionally, at the meeting, President Obama expressed his stance on multilateral trade agreements involving both Canada and Mexico: “The prescription of withdrawing from trade deals and focusing solely on your [countries’] local market[s], that’s the wrong medicine. It’s not feasible.”[2]

The North American Leaders’ Summit started in 2005, under the name of Security and Prosperity Partnership of North America. From the beginning, the purpose of these meetings has been to bolster cooperation and the sharing of information in order to improve prosperity in the United States, Canada, and Mexico.[3] Despite the changing times and evolving issues of the region, this underlying principle still remains central to the summit. This was evident at this year’s reunion, in which the “three amigos” mainly addressed shared economic concerns.

Despite growing skepticism over the effectiveness of international trade agreements as well as increasing global xenophobia, the three leaders reasserted their commitments to maintain cohesiveness throughout the region.[4] In this regard, President Peña Nieto declared, “we need to be very clear in terms of describing the benefits of being an integrated region. Jobs are created, companies are incorporated, trade is free and more development can reach people due to regional integration. Isolationism is not a route towards progress; integration is.”[5] Although NAFTA, a 1994 trilateral free trade agreement including the United States, Mexico and Canada, failed to uphold its promises, the heads of states still insist to pursue a free trade agenda. Both presumed 2016 U.S. presidential candidates have also opposed the 12-nation Trans-Pacific Partnership, signed in February but not yet ratified by the United States, while President Obama made it clear at the summit that “he was committed to ensuring the pact contained high labor and trade standards.”[6]

Another important topic addressed at this year’s North American Leaders’ Summit was Canada’s visa policy towards Mexican visitors. PM Trudeau announced Canada’s new policy on Mexican immigrants: “We will be lifting visas…[for visitors] to Canada from Mexico.”[7] This announcement reaffirms Canada’s willingness to set aside its previous diplomatic tensions with Mexico. In the past, Canada’s requirement of Mexican visitors to have visas in order to travel to Canada has caused a strain in the relations of the two nations.

Remarkably, one of the greatest outcomes of the meeting was the unanimous decision to commit to the promotion of clean energy. In fact, a White House announcement stated, “In recognition of our close ties and shared vision, we commit today to an ambitious and enduring North American Climate, Clean Energy, and Environment Partnership that sets us firmly on the path to a more sustainable future.”[8] The agreement mandates that the three nations will strive to reach a 50 percent threshold of clean power across North America by the year 2025.[9]

Certain crucial topics of discussion were omitted from this year’s summit. First and foremost, the leaders failed to mention political instability as well as recent progress in the Latin American and Caribbean region. For example, current issues facing Haiti, such as uncertain leadership, political scandals in Brazil, and the Colombian government’s newly signed peace agreement with the FARC, were not addressed.[10] In summary, the 2016 North American Leaders’ Summit served as a platform for the reaffirmation of trilateral economic relations in spite of the importance of seeking a broader and deeper social cohesiveness.